by Graham Baates
in Guns, Rifles
0 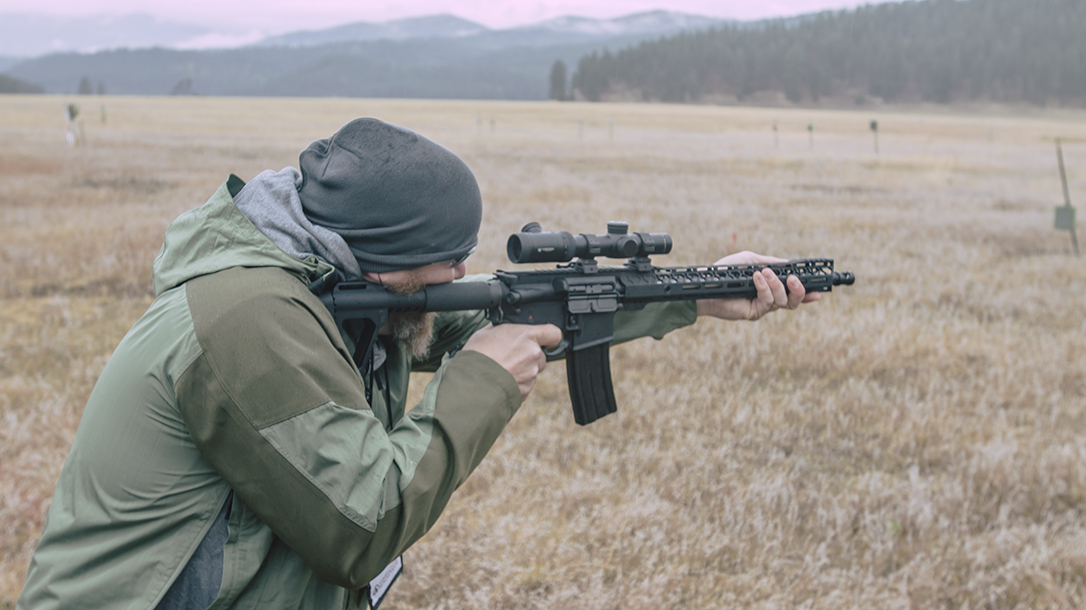 DoubleStar was looking to take the 5.56mm NATO to its accuracy limits in the AR platform while keeping the rifle within financial reach of the average dedicated shooter. DoubleStar starts with a custom, spiral-fluted, 24-inch Shaw barrel made from 416 stainless steel with a 1-in-8-inch twist rate and completes the build with a blend of carefully selected parts. Like the barrel, the most important parts were purposefully chosen to create the best shooter experience.

I hadn’t heard of Cedar Enterprises before, but the company’s two-stage trigger is superb. Described as breaking between 4.2 and 4.6 pounds, it feels like rolling a ball bearing against a strand of glass no thicker than a spaghetti noodle. And yet, cosmetically, the trigger doesn’t look any different on the exterior than another mil-spec trigger unit.

Completing the user interface is the beard-friendly ACE ARFX stock and the very comfortable Ergo Tactical Deluxe grip. The ACE ARFX is a clean design with a simple foam sleeve over the buffer tube. This foam is soft to the cheek and also makes for a comfortable interface regardless of temperature. The Ergo pistol grip is contoured with a palm swell and comes with a removable shelf. The shelf supports your hand and inspires a more relaxed grip for firing—something that promotes fine motor control, a necessity for taking advantage of the Midnight Dragon’s trigger.

The elements combine with the forged aircraft-grade 7075-T6 aluminum receivers for a substantial weight of 9.55 pounds, which makes for a very enjoyable shooting experience. Despite the lack of a muzzle device, perceived recoil is practically non-existent. What isn’t absorbed by the rifle’s weight is transferred gently to the shooter through the rubberized grip and buttplate. Any shift or movement of the gun under your cheek is masked by the soft foam-covered buffer tube. In short, DoubleStar has removed just about any excuse for poor shooting results. This puts a surprising amount of pressure on the shooter. If you miss, you’ll be hard pressed to find an excuse outside of shooter error.

It may spoil the review, but I must mention what drove my excitement about this rifle. A few months ago, I hit the range with a shooting partner to test some different loads through this gun. Although some will argue that specific twist rates can only do well with specific bullet weights, I haven’t found that to matter as much at 100 yards as long as the ammo itself is consistent.

On this particular day, we were making our way through a variety of different loads with 62-grain projectiles. Our intent was to find the differences between projectiles of different brands. Sometimes a rifle just likes a specific loading from one specific manufacturer. I learned this in my early rifle days when my Marlin had a particular favorite, even among match ammunition.

It was a hot day, and the barrel was warm after our fifth 10-shot group. We only paused between groups to reload. Using a Caldwell Stinger rest, and the rifle was equipped with Nikon’s 4-16x50mm Black X1000 scope in a Warne XSKEL mount. We loaded 10 Nosler 62-grain Varmageddon FBHP rounds. I fired five shots, my partner fired five, and we achieved an incredible result: a ragged hole about half an inch wide.

It’s safe to say that the DoubleStar Midnight Dragon and Nosler’s 62-grain Varmageddon ammo made for a good pairing. A more frustrating note is that I now find myself chasing that group every time I go out to the range, and the Midnight Dragon has set the standard for what I expect from any rifle supposedly built for accuracy. It’s one thing to know a group is possible; it’s another to have shot it and want to shoot it again. On a good range day, I can achieve these results again with the Midnight Dragon and Nosler ammo, and I’ve often been disappointed when other “accurized” rifles haven’t gotten nearly as close. For that reason, I’m just as excited to head to the range with the Midnight Dragon now as when it was first announced in 2013.

I wanted to see how the rifle would run with a wider variety of loads and manufacturers. For this review, I tested each load by firing a single five-shot group at 100 yards, and once again, I used a Caldwell Stinger rest. I also used the same Nikon scope but installed it in a Nikon mount this time around. The Black FX1000 is a first-focal-plane scope that I have come to enjoy for groupings because it makes the job easy. You can quickly make adjustments regardless of the magnification level.

My intent with this test was to show how the Midnight Dragon might perform in the real world with commonly available higher-end ammunition. Again, the barrel was generally warm, and I only paused between groups to reload. My shooting cadence was about one round every other second.

The worst of my five-shot groups came with Hornady’s range-grade 62-grain Black FMJs, but it was still only 1.5 inches. My best group measured just 0.3 inches with Hornady’s 68-grain Match BTHPs until human error produced a flyer. But 0.3 inches is impressive for four shots. Especially when you consider that, though I spent 15 years on active duty in the Army, I think of myself as more of a handgunner than a rifleman. In other words, I’m no PRS shooter. The Midnight Dragon is just that good. Give the rifle with a steady platform and it will hit what you point it at with ego-killing precision.

If used as a varmint gun, for example, or to engage any target that can be stopped with the .223 Remington or 5.56mm NATO, 0.3 to 1.5 MOA is plenty acceptable, especially if that 1.5 MOA can be achieved with common range ammo. Even the military-surplus 77-grain IMI rounds produced a group less than 1 MOA.

DoubleStar Midnight Dragon: Worth The Weight

Are there any drawbacks with the Midnight Dragon? For me at least, it has been slightly difficult to transport. At just over 42 inches in total length, the Midnight Dragon needs a spacious den. It’s also hefty—perfect for bench shooting, but not ideal for a long hike. These drawbacks are rather insignificant, however, when you’re after a distant target or varmint. Transportability could easily be enhanced with a folding stock mechanism like those offered by Law Tactical.

I’ve also never experienced a single malfunction with the Midnight Dragon, even with loose rounds from the bottom of an old range bag. It’s clear DoubleStar already knew how to make a reliable rifle. The inclusion and proper installation of a custom Shaw barrel into a host engineered exactly for a shooter to take advantage of such a barrel has made for one heck of a rifle. The attention to detail that went into something as simple as properly staking the gas key has obviously gone into the construction of the rest of the rifle. The folks at DoubleStar aren’t just assembling rifles—they’re manufacturing, smithing and perfecting them.

If the Midnight Dragon has inspired you to simply order a Shaw barrel matching this profile, I have some bad news. As of this writing, Shaw does not publicly list a bull barrel like this one on its own, even using the company’s custom ordering system. The closest I could find was over $400. That’s more than one third the MSRP of the Midnight Dragon. But even if you built your own Midnight Dragon clone, it wouldn’t come with DoubleStar’s lifetime warranty. So maybe get it straight from the source.

Bullet weight measured in grains and accuracy in inches for best five-shot groups at 100 yards.