0
SHARES
10
VIEWS
Share on FacebookShare on Twitter
The Bushnell HDMR 5-22x optic with a Horus H59 reticle made precise holds possible without dialing elevation or wind adjustments at long range.

Over the past two years, I have punched paper with more than 70 different AR-platform rifles. Some shoot better than others. It has become almost a given that when I drop the bolt release on a live round in a JP Enterprises rifle, it will print amazing groups. I had high expectations for the company’s LRP-07 chambered in a relatively new target cartridge, the 6.5 Creedmoor.

“The Creedmoor fills the niche for people who don’t want to load,” John Paul Gangl, owner of JPE, said. “For people who want match-grade ammo and don’t want to load, this round gives sub-MOA accuracy. Comparing the .260 Remington and the 6.5 Creedmoor according to performance, the cartridges are practically the same. With the Creedmoor, the bullet is seated farther out of the case when loaded to fit within the overall length constraints of the magazine, and you don’t have the tail end of the bullet down in the case. It makes the burning rate of the powder less critical than with the .260 Remington.”

As for the ammo, Paul remarked, “Good factory-loaded 6.5 Creedmoor is easy to find, too. Very little factory ammunition for the .260 Remington is adequately loaded that isn’t over-pressured for a 1-in-8-inch-twist barrel in a gas gun. Travis Fisher, with Sheepdog Ammo, does load half-MOA ammo for the .260 Remington that is accurate with 120-grain and 139-grain A-MAX bullets in our gas impingement guns, though. The basic advantage of Creedmoor ammo is that it is more compatible with a semi-auto.” 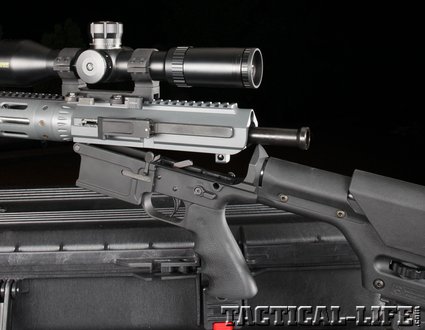 Hornady should receive some accolades for walking out on a limb and legitimizing some wildcats and lesser-known cartridges. The 6.5 Grendel is one, and recently, the .300 Whisper is yet another. The 6.5 Creedmoor joins the list of new cartridges in Hornady’s stable. The Creedmoor got its start when Hornady Senior Ballistician Dave Emary and Creedmoor Sports General Manager Dennis DeMille (also a 2005 NRA National High Power champion) mused about the ideal match cartridge. As has been told several times, the pair agreed that the cartridge must produce match-grade accuracy, shoot high ballistic-coefficient bullets, produce low recoil, and be easy on barrels by producing mid-range chamber pressures. The new cartridge would also have a maximum overall length of 2.8 inches to fit either a short-action bolt gun’s magazine well or an AR-10 magazine. DeMille began development of the new cartridge, and Hornady provided the last requirements—affordability and availability.

In June 2008, Hornady started cranking out loads with the 120-grain A-MAX, to be followed weeks later with a 140-grain A-MAX load. A side-by-side comparison of the 6.5 Creedmoor and the .260 Remington shows the new round to be 0.11 inches shorter with a 30-degree shoulder and less body taper. Volume is similar, with the Creedmoor holding 52.1 grains of water, which is about 2.3 grains less than a new unfired .260 Remington case.

However, the usable case capacity of the Creedmoor narrows when loading long match bullets. When you seat a 140-grain A-MAX into both cases for 2.8-inch overall lengths, the difference in usable case capacity is under one grain. I put several .260 Remington rounds downrange through a JPE LRP-07 and found little difference between the performance and accuracy of the newer 6.5 Creedmoor. The major difference was as previously stated—the .260 Remington shot from this rifle was a handloader’s proposition.

Over the past few years, JP Enterprises has specialized in building high-end AR-platform rifles and accessories for the serious competition shooter. JPE has established their reputation by delivering the finest competition-proven products to shooting professionals, elite military units and knowledgeable recreational shooters around the globe. “We are proud of the fact that we build the very best in the world,” said owner John Paul, “and we do it here in the U.S.A. with all-American components.”

The newest twist in the LRP-07 lineup—the abbreviation for Long-Range Precision, introduced in 2007—is the 6.5 Creedmoor chambering. Excellent fit and finish, a silky smooth action, an exceptionally crisp single-stage trigger, and outstanding accuracy and reliability are all qualities that have long been built into their rifles.

The LRP-07 features durable upper and lower receivers machined from solid 7075-T6 aluminum billet. When this LRP-07 arrived for testing, I removed it from the box and began cleaning it. I began to find that this rifle stays on target for more reasons than its exceptional muzzle brake. Significant differences were apparent when I pulled the bolt carrier assembly and the recoil spring. The JP LMOS (Low Mass Operating System) is a departure from AR-10-type bolt carrier assemblies. It weighs 14.7 ounces compared to an AR-10’s bolt, which weighs 19.4 ounces—a 24 percent reduction. Counteracting the lighter bolt assembly is a heavier recoil spring in the LMOS. The JP spring weighs 5.35 ounces, and the standard AR-10 spring weighs 1.75 ounces. The recoil buffers appeared to be the identical, weighing 5.35 ounces each. The balanced bolt assembly and recoil spring function well with a range of factory fodder and handloads when coupled with JPE’s adjustable gas block. 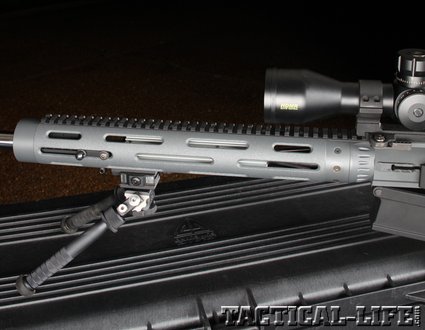 Another departure from the AR-10-platform rifles is the LRP’s unique left-side charging system. It produces a shorter stroke, a little more leverage potential, and is easier to use than the T-handle of the AR-10. You can charge the LRP-07 without dismounting the rifle, or losing your cheekweld, and the handle itself folds back automatically to minimize the rifle’s overall profile.

The LRP-07’s modular handguard uses a smaller, more manageable diameter tube, and the free-floating design allows a hunter to brace the rifle anywhere along the tube without creating a point-of-impact shift. The handguard’s mounting rail options also allow users to customize the rifle with accessories like bipods.

The barrel is a lapped, cryogenically treated stainless 22-inch tube. At the muzzle, the LRP-07 comes equipped with a JP high-efficiency compensator. Even with earplugs and muffs in place, I could discern a significant difference in muzzle blast while shooting this rig. 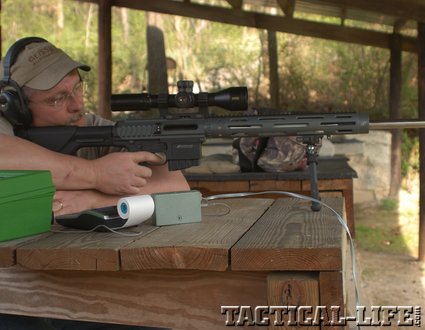 Once I had tacked the targets in place, squared up the chronograph, and thumbed 10 rounds into the rifle’s magazine, I settled into the gun and acquired the first bullseye at a 20-yard sighter target. The rifle’s low recoil impulse was pleasant and on par with a .223 from an AR-15. Target recovery was instantaneous.

I chose one Hornady 6.5 Creedmoor factory load and one handload. Velocities were recorded with a Shooting Chrony Gamma Master and an Oehler 35P chronograph in 10-shot strings. I fired a minimum of six 5-shot groups with each load at 100 yards. The optic used for testing was a Bushnell HDMR 3.5-21X scope with a Horus H59 reticle.

The factory fodder was Hornady’s 120-grain A-MAX match loads. I measured velocities for this load on two different days with the different chronographs. The comparison presented interesting results. The Oehler 35P recorded a velocity average of 2,921 FPS (feet per second). A couple of weeks later, I was using a Shooting Chrony Gamma Master and recorded the same 2,921 FPS average. This load hovers around 1 MOA. The 5-shot average was calculated at 1.07 inches, while the smallest group was measured at 0.75 inches.

The first handload was a 123-grain Sierra MatchKing driven by 35.8 grains of IMR 8208 and ignited by a Federal large-rifle Match primer. The cartridge’s overall length was 2.79 inches. I loaded these rounds with a set of Hornady custom dies, and I didn’t realize this was a set of changeable neck bushing dies until I actually started resizing cases.

Luckily, I had a set of Redding .260 Remington neck bushing dies and several sizes of neck bushings to fit it. I was able to use the .280-diameter Redding neck bushing in the Hornady and proceeded to finish resizing. The simplified reasoning behind the use of neck bushings is to precisely size the case necks to provide a custom fit to a particular rifle’s chamber and provide round-to-round neck tension consistency.

I fired six 5-shot groups that produced a 0.98-inch average, which is a good starting point for this rifle. I fired two 10-shot strings across a chronograph to ferret out possible problems. The first string had a 152 FPS extreme spread, a standard deviation of 47 FPS and an average of 2,701 FPS. The first shot from a cold, clean barrel was clocked at 2,634 FPS, which skewed the data. The second string’s average velocity rose to 2,718 FPS, but the extreme spread remained high at 121 FPS. The standard deviation was almost 41 FPS. When I examined groups, I wasn’t surprised to see four groups with tiny 4-shot clusters with single-round flyers. Even the two sub-MOA groups that measured 0.62 and 0.77 inches produced a distinct cluster with outliers.

When the best load is found for this rifle, I’m confident that it will produce groups about 0.33 MOA in size.