The Assault Weapons Ban of 1994 did much more to promote interest in military style rifles than it did to quell gun violence. Now just four years after the largely ineffectual ban sunset we are, once again, facing an uncertain political future. Panic buying has already started and many are buying semi-auto rifles, parts and components and putting them away as an investment. With our industry’s limited supply and increasing demand by the shooting community, prices are rising. So, when I heard that DPMS was offering a brand new gun for just $704 I was floored. 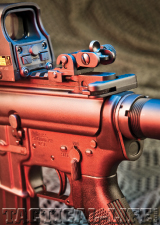 Called the Panther 5.56NATO Sportical, DPMS officials claim that it bridges the gap between sporting and tactical rifles. It features a 6-position collapsing stock, lightweight 16-inch barrel, M4-style handguards and a flat top receiver with Picatinny rail that allows use of detachable iron sights or any of the many optical sights available. Its gas block is also railed allowing for use of a detachable/folding front iron sight.

I know what you’re thinking: how many corners did DPMS cut to get the price this low? After having the last 6 weeks to shoot and evaluate the new Sportical I would have to say, not as many as you think.

Gun Details
Let’s start with the lower receiver. DPMS uses the same lower that they use for all of their other 5.56mm rifles. It is machined from a forging of 7075-T6 aircraft grade aluminum. Once machined it is hard coat anodized and then Teflon coated. DPMS is not using cast or MIM parts for internals and the lower is made to industry mil-spec. What that means is that if you ever want to replace the fire control group (hammer, trigger, sear etc) with a match grade trigger the parts will drop right in. There won’t be any gunsmithing necessary. It’s the same thing with the buttstock, want to upgrade to a MagPul, Vltor or any of the many others? Those parts will drop right in.