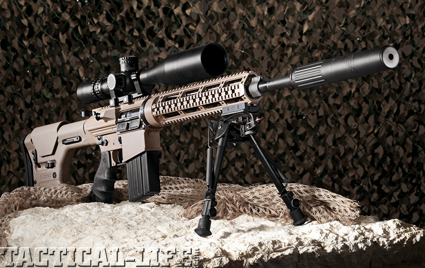 The DPMS Panther Rapid Engagement Precision Rifle (REPR) is designed to fulfill a very specific military need. Among its many features, the ambi mag release is great for gloved hands, facilitating operation in adverse conditions.

To many, the REPR is nothing more than an industry-attached name for a cool looking rifle. Truth is, it’s actually another government acronym that just so happens to fit the general task of the weapon. The Rapid Engagement Precision Rifle is the U.S. Marine Corps’ small arms program request for a new system to deal with the real threats encountered in the field. An advanced planning presentation in May 2008 outlines the basic concept to be, “a 7.62mm semi-automatic sniper rifle that holds 1- to 2-MOA accuracy out to 800 to 1,000 meters.” The needs of the warfighter had changed and although the pinpoint accuracy of a bolt rifle has its place, so does the need for similar accuracy with the ability to rapidly engage multiple threats. There had also arisen a need to do that over longer engagements, meaning higher capacity. This was not a new requirement, as the Marine’s had been using the M39 (a highly modified M14) for decades, and still do in many instances. But for all that system’s pluses, it is heavy, does not always lend itself to mounting optics and can be armorer intensive. What was really needed was a system that was lighter in weight, accurate, reliable, used existing ammunition and magazines, and could be fielded easily. 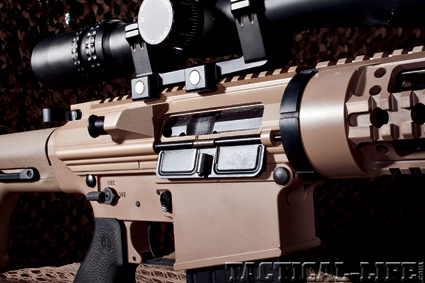 DPMS’ REPR is shown in Flat Dark Earth—the color of choice in today’s theaters of operation.

Although a Marine Corps program, this was eventually sort of melded into the Army’s SASS program. In a statement before Congress, the Commander of Marine Corps Systems Command Brigadier General Michael M. Brogan stated, “The Marine Corps is pursuing the Army’s Semi Automatic Sniper System (SASS) to meet the REPR requirement, the Army has the lead.” That being the case, there was a system in various configurations that had some movement within the community. The SR25 has been around for years as has its magazines. The 7.62x51mm is easily one of the most prolific calibers in inventory, and the AR platform is ergonomic, lightweight, and potentially very accurate. It can be reliable, but often the melding of the two (accuracy and reliability) has not been so common. It finally resulted in what is the M110 a rifle based on the SR25, with changes to accommodate a somewhat less specific sniper role that could be used more widely within all the services. This contract and its commensurate industry competition resulted in some very fine rifles that either competed for the contract, or were and are built on the basic premise. 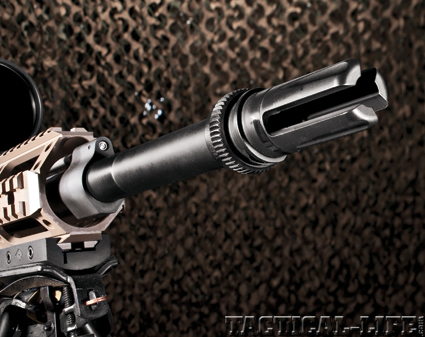 AAC suppressors seem to be the choice of many military units, and their provided flash-hider
allows easy use.

Gun Details
The DPMS REPR rifle that arrived was Flat Dark Earth, the color du jour that is so popular these days. The lower is of the milled variety, hard coat anodized and Teflon coated. It contains an 8620 steel bolt carrier and a Carpenter 158 steel bolt for durability. The forend has a 4-rail setup that is free-floated, mil-spec, and is coated with the same Teflon. It covers an 18-inch chromoly barrel that has been fluted and coated in Remonite and has a 1-in-10-inch twist rate. This coating is designed to prolong barrel life and reduce the effects of corrosion.
The muzzle is capped