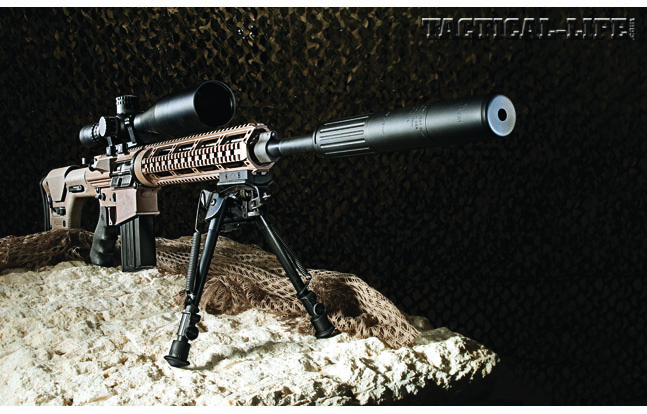 1 of 3
DPMS Panther REPR | Gun Review 1
“If you want to hunt, practice or simply play at the range with a bigger bullet, this is close to perfect.” 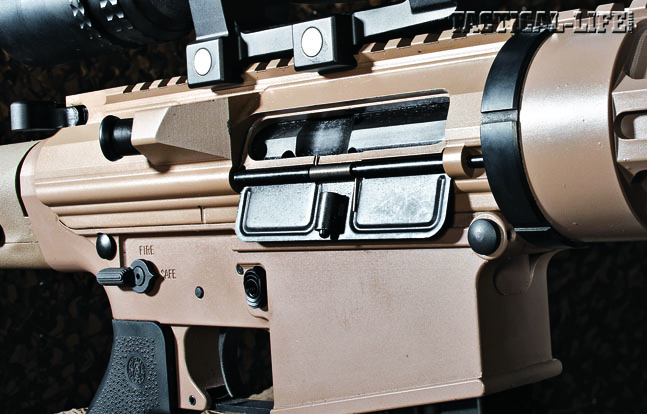 2 of 3
DPMS Panther REPR | Gun Review 2
The milled lower felt solid and its Teflon coating proved durable and rugged. The REPR’s ambidextrous safety is easy to reach and its trigger is crisp and predictable—hallmarks for great accuracy. 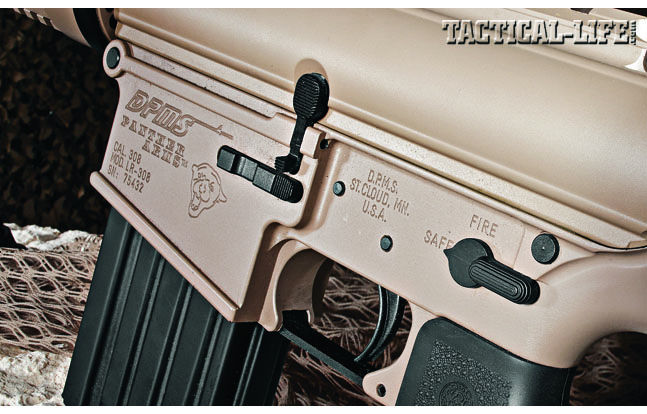 3 of 3
DPMS Panther REPR | Gun Review 3
The milled lower felt solid and its Teflon coating proved durable and rugged. The REPR’s ambidextrous safety is easy to reach and its trigger is crisp and predictable—hallmarks for great accuracy. 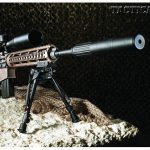 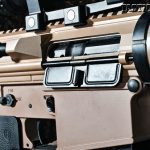 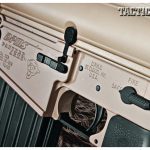 The Rapid Engagement Precision Rifle (REPR) started out as a Marine Corps small arms program. Its original intent was to more adequately deal with the threats of today. Too often, the military tends to “fight the last war.” Although the M40 is certainly a viable weapon, it really does not address the needs of today’s operating environments. In an effort to provide the fighting Marine what he needed, the REPR program was born.

What was necessary was a semi-automatic 7.62x51mm rifle that was accurate enough for precision shots in a combat arena. Often called a DMR (Designated Marksman Rifle), it filled a gap between the firepower of the 5.56mm M4 and the precision and range of the 7.62mm M40. It was eventually melded into the SASS (Semi-Automatic Sniper Rifle System) the Army was pursuing at the same time. Although the program changed, the name remained.

The military applications for AR rifles in 7.62x51mm are clear, but this is anything but a new idea for the rest of the gun market. Almost as long as the AR-15 rifle has been around in 5.56mm, there has been a clamoring for the same platform in 7.62x51mm or .308 caliber. The AR platform is ergonomic, comfortable to shoot, tends to have less recoil, and has what must be the largest accessory market in the gun world. Many of the accessories are interchangeable and gun buyers love choices. When personalizing your rifle, you are only limited by your imagination.

It is the caliber that really adds the versatility, though. The 5.56mm or .223 caliber is really a varmint cartridge. Even with many of the bullet choices these days, it is still a .22-caliber projectile, and that brings limitations, especially for a hunter. As comfortable as the platform may be, it really cannot be used properly, or even legally, to hunt much of anything other than varmints. Many wanted a similar rifle in a proven hunting caliber, and it does not get any better than the .308. Not only is it a prolific hunting round, but there is military surplus ammunition, practice ammunition—just about anything you can think of. If you want to hunt, practice or simply play at the range with a bigger bullet, this is close to perfect.

Moving into the police realm, it enjoys a following as well. For those agencies that require more than the .223 can give you, the .308 is perfect. By using the same platform, your training needs are less, the transition time is shorter and many of the optics, sights and accessories can be moved over in a matter of minutes. Even many of the magazine pouches will work. It really is perfect for those that need the bigger caliber. In the hands of a police marksman, it can be even more valuable—especially if it is accurate, and many are.

The only real problem has been reliability. Many systems have come out, and some work really well while others are downright scary. The more accurate they are, the more unreliable they can be. All the accuracy in the world is pretty meaningless if it won’t work. If reality matched the hype, it would be wonderful, but in practice, many of these systems have difficulty making it through a magazine change. Things are getting better, however, and with the advent of different gas systems some systems are excellent. Cost then becomes an issue. What the market really needed was an accurate rifle in this platform that was reliable and did not break the bank.

The Panther Answer
It looks as if DPMS has brought a real contender to this market. The REPR that arrived for testing was “Coyote Brown”—a good base color for any use that is similar to Flat Dark Earth. The lower is milled, hardcoat anodized and Teflon-coated. It contains an 8620 steel bolt carrier and a Carpenter-158 steel bolt for durability.

The forend has a quad-rail handguard setup that is free-floated, Mil-Spec, and coated with the same Teflon. It covers an 18-inch chrome-moly barrel that is fluted, has a 1-in-10-inch twist rate, and is coated in Remonite. This coating is designed to prolong barrel life and reduce the effects of corrosion. The muzzle is capped with an AAC flash hider that accommodates their suppressor. The ambidextrous magazine release and ambidextrous safety are really great touches. The triggerguard is hinged so it can be removed for winter use if needed, and the pistol grip is a rubber Hogue model. The stock is a collapsible Magpul PRS that matches the color of the rifle.

Another nice touch is the bipod that comes with it. It includes the adaptor to mount a Harris and the bipod as well. The trigger on the production model is a two-stage, though the one on my test rifle was actually a really crisp JPE single-stage. It also comes with two DPMS 19-round magazines. All you really need is a sighting system.

For this test, the sighting system attached was a Nightforce F1. This is a first focal plane scope with a 50mm objective. This scope uses the lighted MLR reticle and mil-radian adjustments with zero-stop knobs. It is a 3.5 to 15X scope with a 30mm tube mounted in a Nightforce Unimount. This scope has been used to test several rifles and has been exceptionally accurate and 100 percent consistent.

At The Range
Testing was done from a prone position on my tried-and-true Eagle deployment bag on concrete. I used the supplied bipod. Given the twist rate of the barrel, an equal amount of 168- and 175-grain ammunition was tested for accuracy. Two 3-shot groups were fired through the chronograph, the best of the groups were considered for comparison. Every group was fired from an open bolt, so at least one of the three rounds simulated firing from a manually operated bolt.

After all was said and done, there were three pretty clear conclusions. This rifle at least preferred the heavier bullets. In every case, the groups with the 175-grain weight were closer. The best group was produced with the Silver State Armory 175-grain BTHP. Their 168-grain round was very close as well. The Hornady 168-grain BTHP held to the 1 to 2 MOA easily, with the tightest group measuring right at an inch. Not bad given subzero temperatures from the ground, but that is the real world.

Another conclusion was the consistency of the rifle. Almost without fail, the first shot from a manually run bolt was close to dead-center. That is certainly not lost on a police sniper with well over 10 years behind a police sniper rifle. This is also not a typical characteristic of these systems. For a hunter, or even someone just target shooting, this is a huge plus.

The last conclusion is something that has been subtle but noticeable. It often seems that right out of the box, the first round does not always want to chamber on these .308 AR rifles. That can be incredibly irritating, especially given the cost of rifles these days. It generally “breaks in,” but that is a bit more problematic on this platform. In any case, this wasn’t a problem with this rifle. It loaded the first round every single time and in fact, never malfunctioned—another rarity.

The last test was rapid fire. Five magazines were loaded to capacity and the fun commenced. To keep it interesting, multiple man-sized steel targets were engaged at ranges from 50 to 150 yards. The rifle was fired in multiples of twos and threes, as well as singles. It was fired kneeling, off-hand, and prone, moving between them at various ranges. The rifle happily did not malfunction once, and there was a satisfying sound of lead hitting steel with each trigger press. It was not only a testament to the rifle, but the scope as well. That was a pretty solid mating for sure—very fast and very accurate.

This was one of the best examples of this platform I’ve tested to date. It was accurate, reliable, worked perfectly out of the box and is well-suited to just about any mission. Whether used for work, hunting, or fun, the DPMS REPR is a great rifle. 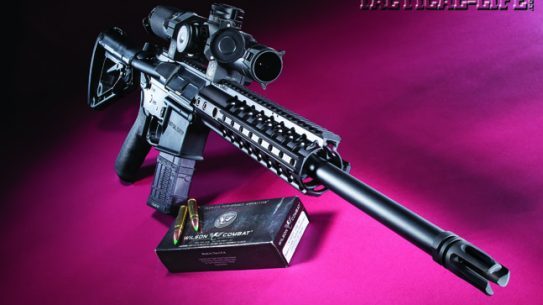 Ever evolving, you will not find more accurate or reliable guns outside of the...