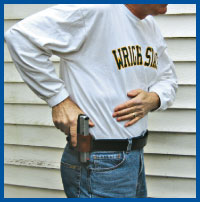 Certain things are essential when preparing for a potential armed confrontation. Being able to bring your gun to the fight from its position of carry is one of the most important of pistolcraft fundamentals. I once had a conversation with a rather well known firearms instructor who told me that he spent very little time working on the drawstroke with his students. His reasoning for this? “It has been my experience that in times of great threat, the gun somehow appears in the shooter’s hand and they can’t remember how it got there. Why spend valuable training time on something that will likely just happen?” Does anyone reading this really think that the type of drawstroke needed to deliver a quick and accurate shot in a time of immense pandemonium will just happen? Yes, just about anyone can reach down and draw a gun from a holster. But doing it the same way each and every time, regardless of body position, so that it can be directed to a relatively small target (the human torso) and fire multiple shots fast enough to stop a lethal threat is not something that will just happen. 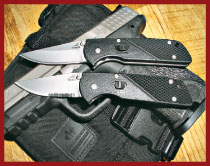 Drawing a handgun is a complex motor skill, one that must be trained, mastered and then practiced regularly. Drawing from a simple open top holster is difficult enough, but add to it clearing a concealing garment along with manipulating the retention straps of a security holster and you have a real chore on your hands. In order to be an active participant in any fight, you need to draw and fire one round on an 8×10-inch target at 20 feet in two seconds or less together with a lateral step regardless of holster type and whether or not it’s concealed. Naturally, 1.5 seconds would be even better, but faster than 1.5 seconds is only good if it can be accomplished without spastic motion that will actually slow the first, solid hit. Going fast without control is not the goal. The goal is to hit each and every time with lack of unnecessary motion, which will lead to speed. Additionally, it also needs to be done on command, not after a 100-round practice session.