by John Larsen
in Uncategorized
0

0
SHARES
0
VIEWS
Share on FacebookShare on Twitter
Whether jumping into a hot drop zone or hoofing it through the unforgiving terrain of Afghanistan, the lightweight and versatile Benchmade Nim Cub II will be a knife that’s there when you need it.

You do not have to be a military expert to realize that currently, in Afghanistan, the U.S. military is conducting combat operations in some very challenging terrain. Although soldiers and Marines often move to their objectives in MRAP (Mine Resistant Ambush Protected) vehicles, there are still plenty of times when operations are conducted on foot, especially in the rugged mountainous areas along the Afghanistan/Pakistan Border.

Photos show the extremely heavy loads that are carried on these operations, as when working in the mountains, especially during winter months, you cannot count on helicopters being able to bring in the supplies needed to operate. Recently, I talked to a young sergeant I know from the 2nd Battalion, 75th Rangers (Abn). He told me that on steep mountainsides, if he fell and had to get back up, he would sit into his rucksack, roll over, extend his legs downhill, and do sort of a push-up to get to his feet. On flat terrain, his rucksack was just too heavy and he had to be helped to his feet by other Rangers. 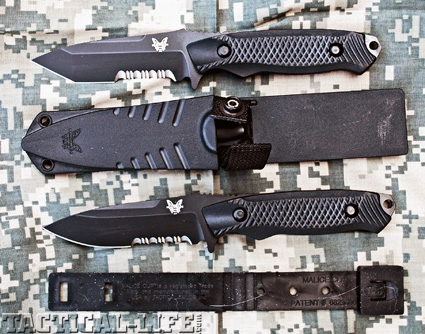 Note the EDM texturing of the handle, as well as the lanyard hole/butt. The sheath is MOLLE-compatible and comes with a Malice Clip.

Why has no one addressed this problem? Thanks in large part to my good friend and former Special Forces teammate John Simpson, I have about 28 “studies” done on the weights carried in combat, some going back to what the Roman legions carried. Nothing has changed much, and I can see in my mind some Roman legionnaires, sitting around a camp fire in what is now modern day Germany, complaining about how the “chairborne” generals back in Rome expected them to carry all their equipment, march 20 miles a day, build an encampment and still have the energy to fight! The bottom line of all the studies is that a soldier should not carry more than about a third of his body weight if he is to be able to fight effectively when he gets to his objective. 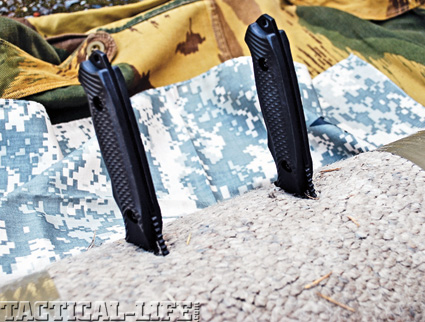 Both the drop-point and Tanto-point Nim Cub II knives penetrated up to their hilt in this tightly rolled rug.