0
SHARES
0
VIEWS
Share on FacebookShare on Twitter
A semi-submersible drug-trafficking crew prepares to abandon ship before being intercepted by the Coast Guard approximately 150 miles off the Colombian coast in 2009. DoD Photos.

To export cocaine from Colombia, drug cartels are increasingly turning to the open ocean, using custom-made semi-submersibles and even dive-capable submarines to avoid detection. Law enforcement officers and military personnel tasked with interrupting the narcotics supply chain by locating and boarding these craft are using tactics not employed since Allied forces battled Nazi U-boats in the Atlantic during World War II. Surveillance flights, nighttime approaches by darkened ships and high-speed intercepts using inflatable Zodiac boats have proven successful in getting boots on deck before traffickers can open scuttling valves and sink their subs and illicit cargo. Some teams, unsatisfied with surface tactics, have even fast-roped from helicopters onto the craft to guarantee no evidence will be destroyed. 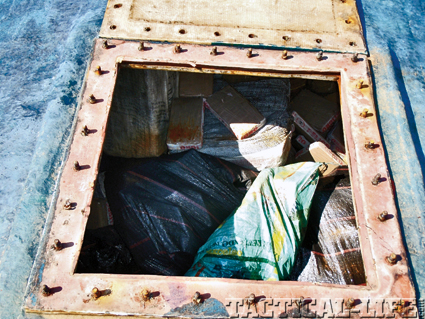 The U.S. Coast Guard found bales of contra­band piled deep within a self-propelled semi-submersible that was intercepted in the Eastern Pacific in October 2009.

Built in muddy rivers deep in the jungles of Colombia, the submarines and semi-submersibles of the cartels take months to build and cost over a million dollars each. Their low-profile hulls, ranging from 30 to 80 feet, are normally made of fiberglass and designed to stay almost completely submerged to avoid detection by sight and radar. Most carry four-man crews and up to 10 tons of cocaine on one-way transits. Each is fitted with a diesel engine and a large fuel tank to allow non-stop transits of up to 2,000 miles at cruising speeds of around 10 miles per hour. Installed satellite navigation systems keep their crews on course from Colombia to rendezvous points along Central America and Mexico’s Pacific and Gulf coasts, where they are abandoned and sunk after making delivery. Made illegal by the Drug Trafficking Vessel Interdiction Act of 2008, even being on board one of these subs is a felony.

The first intelligence reports indicating the existence of a narco sub came from the U.S. Drug Enforcement Agency in 1993, but it wasn’t until 2006 that U.S. authorities observed and seized one. Later nicknamed Bigfoot because of persistent but unproven rumors surrounding the cartel’s undersea efforts, the U.S. Coast Guard located the craft by chance 90 miles from the Costa Rican shoreline. An attentive lookout, standing watch with binoculars and elevated above the ocean surface on the bridge wing of a Coast Guard cutter, spotted the sub as the ship closed within a mile of its position. Six officers, armed with M9 Berettas and a single Remington M870 shotgun, launched from the cutter in a small inflatable Zodiac boat and approached the suspicious craft. The officers were initially unaware of the low-profile vessel’s purpose and maneuvered next to it to investigate. Once alongside, the boarding party began knocking on its exterior hatches, drawing their weapons as movement was heard inside. Four men soon exited and surrendered themselves, an AK-47 and three tons of cocaine.