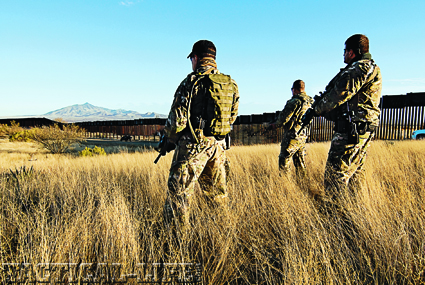 LE U.S. Rangers with SIG pistols and M4s on a security sweep near Wash #60 along the fence that separates Mexico from the U.S. in Coronado National Monument.

The last time I was in Coronado National Memorial in Southern Arizona, it was to participate in a drug interdiction mission known as an LPOP Operation (Listening Post Observation Post) with various NPS (National Park Service) and USFS (U.S. Forest Service) law enforcement officers and an armed contingent of National Guard troops. As a medically retired but experienced U.S. Customs officer, I was serving as a part-time NPS Criminal Investigator for one year, hired under a special program that provided funding to agencies that rehired a disabled federal employee. I fit that bill as an experienced smuggling investigator who primarily had worked drug cases in places like New York, New Jersey, Miami, New Mexico, Boston and elsewhere.

No Waiting For Business
Within hours of my first deployment to Coronado National Monument, a vehicle loaded with marijuana drove by our OP at just about sunrise. My mission was to observe and attend to intelligence matters.

While I observed from a short distance away, one NPS Special Agent and an NPS Law Enforcement U.S. Park Ranger moved in to arrest a drug smuggler and seize his truck and hundreds of pounds of marijuana. Perhaps not a major case by Miami standards, it was a victory for our side and every victory is worth celebrating in the Drug War.

In this issue of Tactical Weapons we are going to focus on the mission of a relatively small but effective group: The Law Enforcement U.S. Park Rangers who patrol federal lands along the Mexican Border at Coronado National Memorial (4,750 acres), at Ft. Bowie Historic Site (1,000 acres) and at Chiricahua National Monument (approximately 12,000 acres).

The mission, and its associated dangers, is real. On one occasion an NPS LE U.S. Park Ranger was awakened in the middle of the night to respond to a sensor that had gone off along the border. While the Ranger was getting dressed he overheard a scout’s voice over his scanner inform his associates (a group of smugglers) that they better hurry up and move quickly because this scout was actually observing the Ranger through a window in his home while he was putting his pants on.

On another occasion, an LE U.S. Park Ranger conducted a vehicle stop and arrested two smugglers when he observed 400 pounds of marijuana exposed in the back of their pickup truck. This same U.S. Park Ranger then heard the voice of a lookout or scout over his scanner—and the smuggler’s radio—who was reporting the entire incident in vivid detail to his base in Mexico, while he was monitoring U.S. law enforcement operations along the Mexican Border.

Pursuant to incidents like this, the new Chief LE Ranger immediately requested that all Law Enforcement U.S. Park Rangers and their families should live outside of the park/memorial so they would not be under constant surveillance by drug or human smugglers. Even though improvements have been made that include the construction of vehicle barriers, a high tech virtual fence and hundreds of miles of new steel pedestrian fencing, patrolling the Mexican Border is still a very dangerous job. 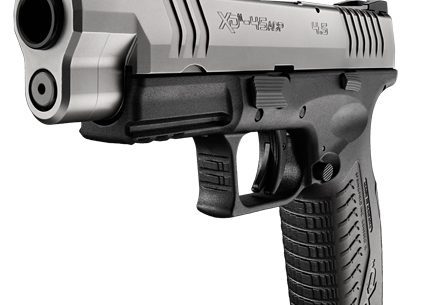 LE U.S. Rangers with SIG pistols and M4s on a security sweep near Wash…