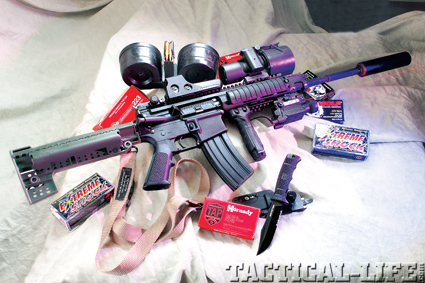 It seems as if every time we turn around, there is another AR-15 rifle entering the market. At last count, there were some 25 manufacturers of these classic rifles and carbines, most very similar in that they use the Ljungmann direct gas impingement system of the original rifle developed in the late 1950s, and upper and lower receivers that have been standard since the 1960s. Virtually every rifle nowadays is available with some sort of MIL-STD-1913 rail adapter system for mounting lights, sights and other accessories. With the demise of the ineffective “Crime Bill of 1994,” flash suppressors and muzzle devices have also returned, but other than exterior cosmetics, virtually every AR rifle is internally identical. In fact, there are so many AR rifle manufacturers that we cannot but wonder when the market for these rifles will become saturated. Thus, if manufacturers are to remain viable and competitive, they must offer products that are unavailable elsewhere or are different from the competition.

With its recently announced Gas Trap Carbine (GTC), DS Arms, long noted for its high quality FAL battle rifles, has entered the AR rifle market with an AR rifle unlike any other. Externally, the most obvious difference between the GTC and others is the patented Predator upper receiver that not only features an uninterrupted full-length MIL-STD-1913 top rail and rails at the handguard sides and bottom, but also free floats the barrel. This enables mounting accessories without affecting the rifle’s zero. Our GTC came with a 16-inch barrel but is also available as a rifle with a 20-inch barrel. The GTC’s barrel is fluted along its entire length for rigidity and heat dissipation. The flutes offer a greater surface area, so heat is more rapidly dispersed than with standard heavy barrels. Flutes also stiffen the barrel and improve accuracy by reducing barrel vibration as the rifle is fired. Our test rifle also came equipped with a Vortec flash suppressor, one of the most effective such devices available. Because our test GTC is a “post-post ban” rifle, the muzzle device is removable, enabling a sound suppressor to be fitted or the factory brake exchanged for another.

One of the major differences between the GTC’s Predator system and any other, is the patented gas system designed by Frank Desomma that eliminates the inherent problems associated with Stoner’s original design. The original AR direct impingement gas system not only blows a large amount of fouling and particulate matter back into the receiver, but also causes excessive heat to be transferred to the receiver area in rapid semi or full automatic fire. In extreme cases, the heat actually causes the headspace to expand. There have been solutions to the AR’s inherent gas system problems in the past, but DSA’s is one of the most innovative. The Predator system, manufactured by Patriot Ordnance Factory in Glendale, Arizona, consists of a FAL-type gas cylinder plug, a 6-inch chrome lined gas cylinder with a chrome plated piston and operating rod that impinges against a reinforced bolt carrier key. Unlike some other “op rod” systems, there are no springs on the Predator rod. Heat from sustained firing will damage springs that surround op rods that are in close proximity to the barrel.

This is especially true in select fire rifles. The GTC gas system is self-regulating. The GTC system can be easily and quickly disassembled for maintenance by simply pressing in on the gas cylinder plug button while rotating the plug clockwise. Once the plug is removed, the piston and operating rod simply fall out when the muzzle is pointed down. Reassembly is accomplished simply by dropping the rod back into the gas cylinder with the muzzle pointed up. If it doesn’t fall into place, all that’s necessary is to shake the upper receiver – the loose rod will fall. The piston is replaced with the gas rings forward. The plug fits only one way and cannot be incorrectly reassembled. All that’s necessary is to push the plug into place, press the locking button and rotate the plug counterclockwise. 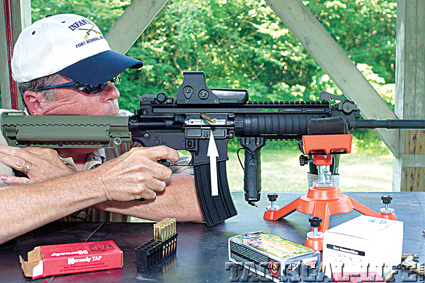 After years of exposure to the AR’s direct gas impingement system, cleaning the GTC is a true revelation. Whereas conventional AR receivers are filled with fouling and particulate matter after a few rounds, the GTC is clean even after extensive firing. There is no carbon fouling, no caked carbon on the bolt or in the bolt carrier recesses. The special tools necessary to clean a conventional AR are no longer needed. The chamber brush with expanded stainless steel bristles is no longer needed to remove fouling from the locking lug area. In short, the GTC is much easier, simpler and quicker to clean and maintain than any AR rifle with the usual direct impingement system. Every time we undertake the onerous task of cleaning an AR rifle, we wonder what Stoner was thinking about when he incorporated the system into his design. The Predator system used by DSA is a really significant step forward in AR design.

But the improved gas system isn’t the end of the story with the GTC. Other internal changes include a chrome plated bolt carrier and bolt. The bolt carrier has been modified for increased reliability and accuracy. The bolt carrier surfaces that ride on the upper receiver are somewhat larger than conventional ones, while maintaining recesses to accommodate any fouling that might accumulate.

Although the carrier is an AR-type that cannot trip an M16 auto sear, the bolt carrier rather than the firing pin cocks the hammer as it moves to the rear, another improvement over most commercial AR rifles. The chamber, locking lugs and barrel interior are also chrome plated, which enhances reliability and eases cleaning. As a top-end AR rifle, the GTC has virtually all the options to make the rifle as close to perfection as possible. Our rifle came with an Ambi-Catch installed as standard. This clever device can be installed in seconds and enables the magazine to be released with either hand, a boon for either right or left-handed shooters. In addition, our test rifle had a two-stage match trigger. Our test rifle’s trigger broke like a glass rod at precisely 4 pounds. For those who do not wish
to purchase an entire rifle, the GTC upper receiver is available as a drop-in conversion that will fit any MIL-SPEC lower receiver.

Add-On Accessories
As good as it is, there are some recently developed accessories that transform any AR rifle. One such item is the Vltor modular stock, available in fixed and collapsible carbine lengths. Since our rifle came with a fixed stock, we chose a fixed version of the Vltor stock, in this instance the company’s “Clubfoot” version that allows one to pull the stock into his shoulder for greater stability when firing from a rest position. The Vltor stock comes with left and right hand compartment cheekrests or non-compartmented variants. We prefer the compartmented versions, not only because they provide waterproof storage for batteries and other small items, but also because they are the most comfortable AR stocks the author has ever used. The compartment is angled with a flat surface that provides a nearly perfect cheek weld. Moreover, the compartments are accessible without removing the stock. Vltor fixed stocks also come with two quick detach (QD) attachment points for Uncle Mike’s sling swivels, one just behind the pistol grip and another at the butt. Swivel attachment is reversible to accommodate right or left-handed shooters. We chose to attach a Tactical Advantage single point sling because the sling does not interfere with the rifle when it is being carried in a ready position and if it becomes necessary to drop the rifle to transition to the pistol, the sling automatically positions the rifle in a central vertical position that does not interfere with drawing or shooting a handgun. 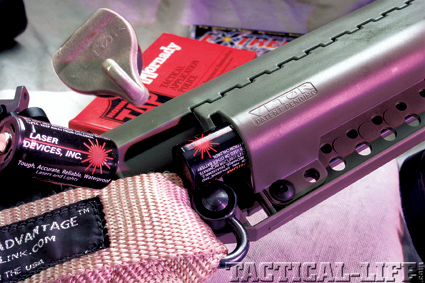 Vltor stock has waterproof compartments for batteries and small items, plus has much more
comfortable cheek rest than any conventional stock, either collapsible or fixed.

For an optical sight, we selected an EOTech 550 AA HOLOGraphic Weapon Sight (HWS). The EOTech HWS is the current choice of the US Special Forces, Drug Enforcement Administration, and is being ordered in thousands by the US Army and Marine Corps. With its 65-MOA ring and 1-MOA central dot, the HWS is arguably the fastest optical sight in existence. All that’s required to use the HWS is keep both eyes open, shoulder the rifle, and the sight is instinctively aligned with the target. As we have mentioned in the past, some Special Forces operators do not even use the reticle for close quarters combat, but center the target in the hardened glass window and shoot. Regardless of quality, optical sights can fail and for this reason backup iron sights are essential for any tactical rifle equipped with optics. We opted for a set of DPMS Mangonel backup iron sights. These sights fold flat when not required and lock into place when in use. There are no spring-loaded detents involved in Mangonel sights, these sights absolutely will not move unless the shooter wants them to do so. The patented post and notch system locks both front and rear sights in the “up” position. The front sight has two notches for use with either a gas block or full-length MIL-STD-1913 rail. We mounted our Mangonel front sight on the GTC’s gas block, but it could just as well have been mounted on the full-length rail. The gas block mount gives a slightly greater sight radius for enhanced accuracy.

We fitted a Sound Technologies .223 suppressor, one of the best performing suppressors in the industry, according to independent testing by Robert Silvers Precision, which performs independent and unbiased scientific testing of suppressors. Suppressors are useful for tactical operations where teams must maintain the ability to communicate while firing their weapons.

Shooting the GTC was a revealing experience, one that showed just how different this new carbine is from conventional AR rifles. Not only was the carbine notably accurate using the “red dot” EOTech that basically covered the bullseye at our 100-yard test distance. With a precision scope, we believe that GTC would deliver close to MOA accuracy, but we evaluated the GTC as a carbine for close to medium range work from 25 to 100 yards distance. As such, the carbine easily can achieve “head shots” at 100 yards using the EOTech. Functioning was generally flawless. We had one failure to feed when the bolt did not travel far enough to the rear to strip a cartridge from the magazine, but that was the only malfunction in over 100 rounds. The two-stage match trigger broke like snapping a glass rod at exactly 3 pounds. This carbine’s operation was also much smoother than we usually expect from AR rifles, attributable to the gas trap operating system. Felt recoil was also minimized, along with muzzle rise, enabling quick recovery and follow-up shots.

Final Notes
Overall, DSArms’ new Gas Trap Carbine breaks new ground in the world of AR rifles that are otherwise so similar that even experts cannot tell the difference between one and another without close inspection. Its innovative “gas piston/op rod” significantly advances the “state of the art” in AR-type firearms and not only adds flexibility to the overall system, but improves both reliability and maintainability over any of its conventional competitors. The GTC not only looks different, it is different, and is arguably the single most significant development in AR rifles and carbines since they were originally designed nearly 50 years ago. Kudos to Patriot Ordnance and DS Arms for this new direction in ARs! 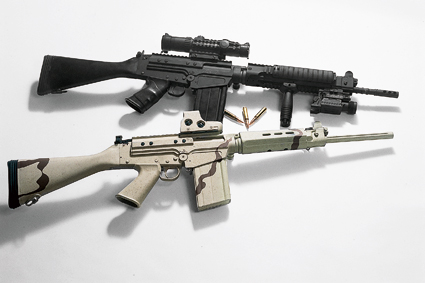