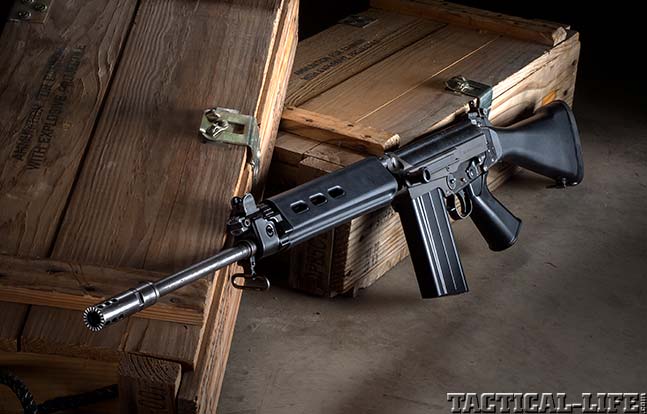 1 of 10
Gun Review: DS Arms Rebuilds IMBEL FAL Rifle
Custom built by DS Arms for the author, this IMBEL FAL-style rifle was made from a combination of U.S.-made and original Brazilian parts. The result was a semi-automatic-only FAL rifle with a great deal of character and charm. 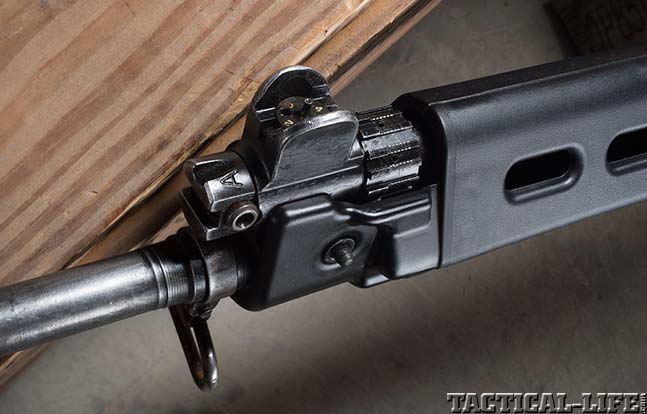 2 of 10
Gun Review: DS Arms Rebuilds IMBEL FAL Rifle
The highly adjustable gas system of the FAL employs a circular gas regulator sleeve that can be rotated to adjust the size of the gas port. This allows it to be adjusted to fire a wide variety of ammunition types as well as to function while heavily fouled. 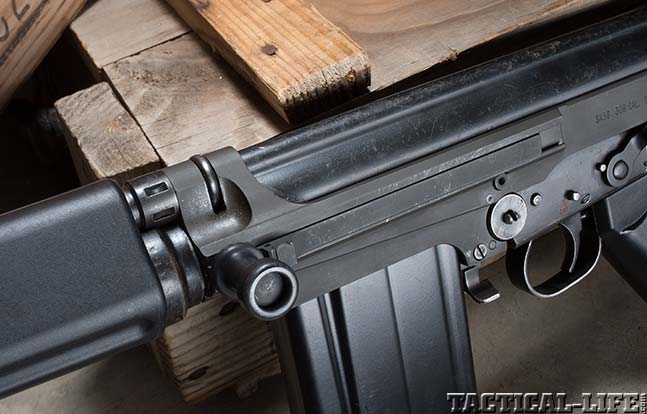 3 of 10
Gun Review: DS Arms Rebuilds IMBEL FAL Rifle
The non-reciprocating knob-style charging handle of the FAL is located on the left side of the upper receiver. 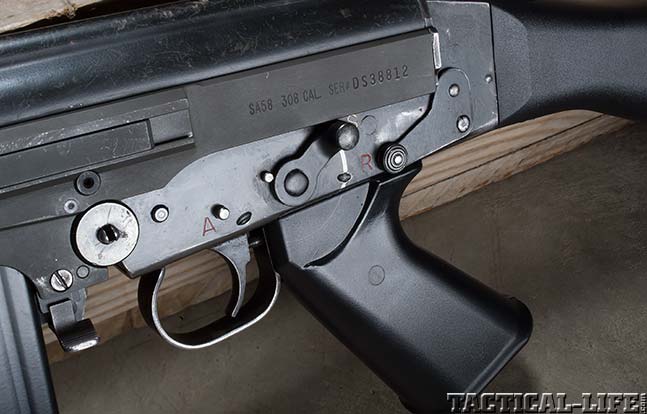 4 of 10
Gun Review: DS Arms Rebuilds IMBEL FAL Rifle
The lower receiver houses the primary controls of the rifle. Note the safety lever above the pistol grip and the bolt release lever forward of the triggerguard. 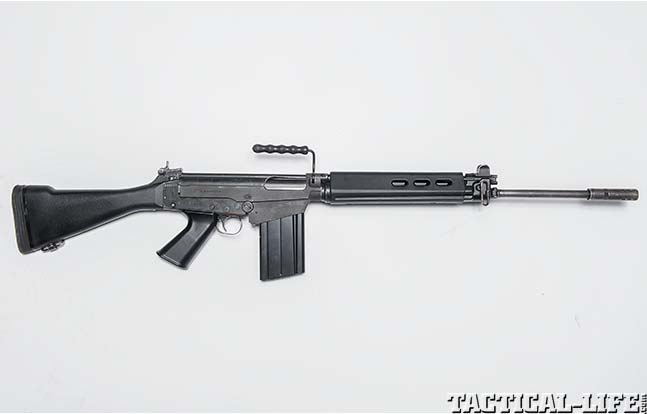 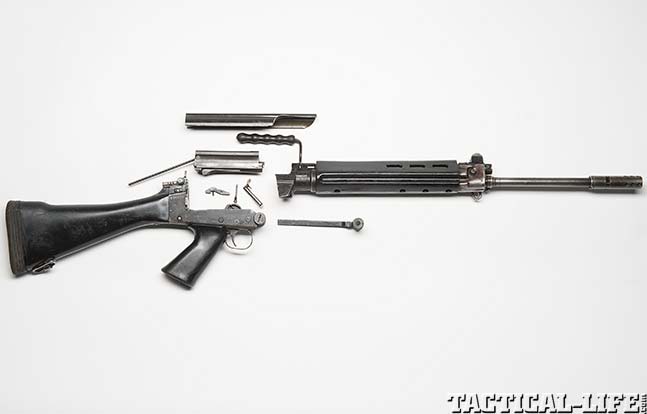 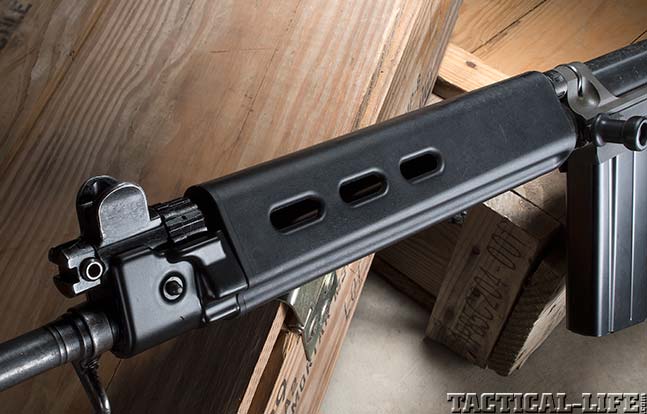 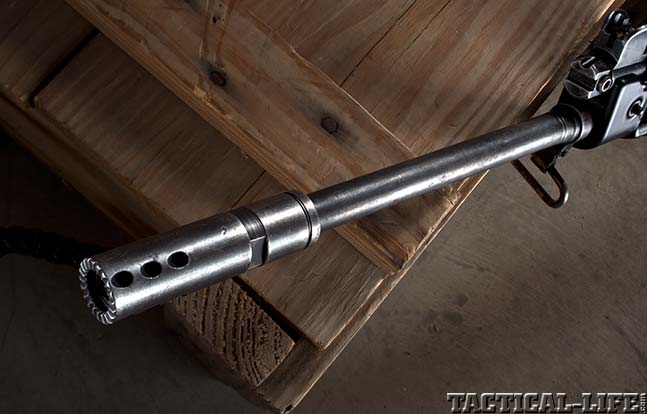 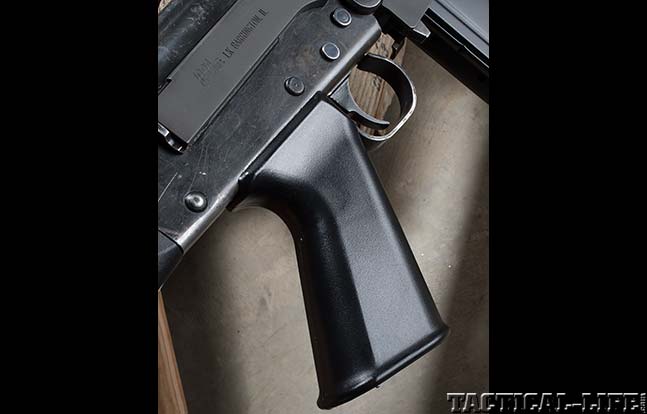 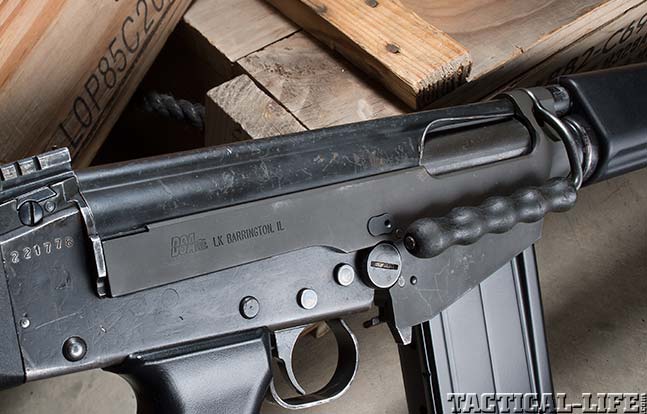 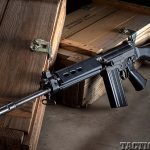 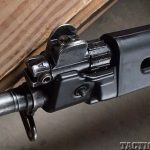 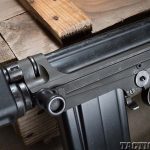 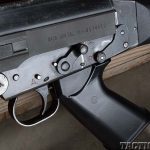 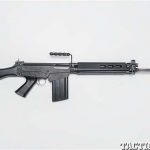 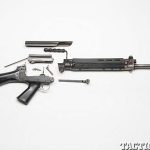 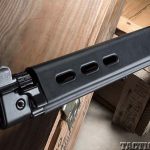 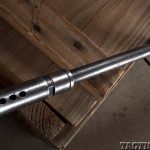 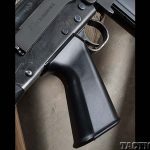 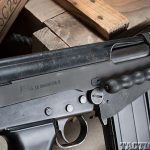 When one considers the topic of “military surplus” guns, thoughts of classics such as K98 and M1 Garand rifles and M1911 and P.38 pistols no doubt come to mind. But, what about all those great Cold War-era classic firearms such as the FN FAL, the Heckler & Koch G3 and the Soviet AKM and AK-74 variants, to name just a few? Unfortunately, due to the select-fire nature of these firearms, it is very difficult or impossible to legally acquire them in their original configuration.

However, there is a thriving market in demilled “parts kits” of these select-fire military rifles. With a little bit of looking, you can find rare and interesting variants of numerous types of these historic firearms. Sans original receivers (and, in most cases these days, barrels), these kits offer collectors a chance to own civilian-legal, semi-automatic versions of classic (and practically unobtainable in original form) military weapons. This can be achieved through a combination of skillful gunsmithing work, a good-quality kit and a thorough understanding of the legalities of producing a firearm like this.

“These kits offer collectors a chance to own civilian-legal variants of classic (and practically unobtainable in original form) military weapons.”

I recently had the opportunity to pick up an interesting FAL parts kit, specifically one from Brazil manufactured by IMBEL. IMBEL, which is an acronym for Indústria de Material Bélico do Brasil, is a Brazilian arms manufacturer under that nation’s Ministry of Defense. The rifle in question is a domestically produced variant of the FAL known as the M964, indicating its year of adoption (1964). From a design standpoint, the M964 is a relatively straightforward, metric-pattern FAL rifle (as opposed to inch-pattern FALs such as the UK and Commonwealth variants).

The kit I acquired, which was priced at around $450, was rated in very good condition with matching numbers and packed in a great deal of grease. The kit also included the original barrel, which is quite a rarity these days due to recent import restrictions. But, with the kit in hand, I realized I needed to not only acquire some U.S.-made parts for the build, but also locate a capable gunsmith to do the work. I knew almost immediately where I should begin—DS Arms.

DS Arms (named for its founder and owner, Dave Selvaggio), started in the late 1980s, and soon developed a reputation for digging up and selling rare and interesting FAL parts from around the world. As part of this relentless focus on the FAL rifle, the company was fortunate enough to learn in the mid-1990s that the Steyr Arms plant in Austria was planning on selling off its licensed FAL manufacturing equipment and spare parts as surplus. As a result, DS Arms was able to purchase the original blueprints, tools and parts for the Austrian StG 58, that nation’s variant of the FAL rifle.

Shipping all this equipment over to the United States, to the company’s location in Illinois, DS Arms soon earned the distinction of manufacturing U.S.-made variants of the FAL to proper specifications. This line of metric-pattern rifles came to be known as the SA58 series, and quickly became renowned for its exceptional quality and attention to detail. And, the line was not simply a direct recreation of the StG 58, but rather a modernized and updated version of the classic design.

“I realized I needed to…locate a capable gunsmith to do the work. I knew almost immediately where I should begin—DS Arms.”

As a result of these efforts, DS Arms is able to provide U.S. consumers with a rock-solid version of one of the most famous military rifles of the 20th century (and beyond, judging from its current use in hotspots around the world). When it comes to military pedigrees, few designs can hold a candle to the FAL-pattern rifle. Developed by the famed Fabrique Nationale (FN) chief arms designer Dieudonné Joseph Saivé, the Fusil Automatique Léger (or “light automatic rifle”) earned the distinction of being adopted by nearly 100 countries during the Cold War era, and seeing service on both sides of many conflicts during that era of seemingly unending proxy wars. In fact, in regards to total numbers produced, the FAL easily outshines the now dominant M16/AR-15 series, and comes in second only to the ubiquitous Kalashnikov in regard to sheer numbers produced.

What is not as well known about DS Arms is the fact that they also offer custom build work for the FAL. While most everyone familiar with the DS Arms brand associates it with their “standard production” rifles, few realize that each gun they make is practically a custom build with a broad range of options, accessories and upgrades available. As a result, the company is well situated through its gunsmithing department to take on additional custom work from customers who may already have their own parts kits. To that end, I gave DS Arms a call and set the wheels in motion on my IMBEL FAL build.

DEVIL’S IN THE DETAILS

So how exactly would a project such as this proceed? In the case of foreign-made military rifles that are imported as demilled kits, the rifle can be rebuilt into a U.S.-made, semi-automatic rifle by combining a prescribed number of domestically produced parts and a new receiver. This option is allowed through what is known as “Section 922(r)” compliance, and refers to Title 18 Chapter 44 Section 922(r) of the United States Code, described in further detail through Title 27 Part 478.39 of the Code of Federal Regulations, on the subject of the assembly of semi-automatic rifles or shotguns.

It states, “No person shall assemble a semi-automatic rifle or any shotgun using more than 10 of the imported parts listed in paragraph (c) of this section if the assembled firearm is prohibited from importation under section 925(d)(3) as not being particularly suitable for or readily adaptable to sporting purposes.” The parts included in this listing are as follows: 1. Frames, receivers, receiver castings, forgings or stampings, 2. Barrels, 3. Barrel extensions, 4. Mounting blocks (trunions), 5. Muzzle attachments, 6. Bolts, 7. Bolt carriers, 8. Operating rods, 9. Gas pistons, 10. Trigger housings, 11. Triggers, 12. Hammers, 13. Sears, 14. Disconnectors, 15. Buttstocks, 16. Pistol grips, 17. Forends, handguards, 18. Magazine bodies, 19. Followers, and 20. Floorplates.

As a result, a semi-automatic firearm that conforms to the laws related to domestically produced firearms is legal to construct as long as it uses no more than 10 of the above-listed parts in its construction. Due to the total number of covered parts in a FAL rifle, that results in a requirement of nine U.S.-made “Section 922(r)” compliance parts in a semi-automatic build project like I was planning with the IMBEL kit.

After a short discussion on the phone with DS Arms regarding their advice on how to proceed, we decided upon the following DS Arms domestically produced parts for this build: 1. Receiver, 2. Buttstock, 3. Handguard, 4. Pistol grip, 5. Gas piston, 6. Cocking handle (operating rod), 7. Magazine body, 8. Magazine follower, and 9. Magazine floorplate.

The heart of any build like this is obviously the new semi-automatic receiver. DS Arms’ line of SA58 receivers is an obvious choice for a project like this. They are machined from a billet of 4140 steel, a process that takes eight full hours of machining according to the company (this includes heat treating and finishing). While the company currently offers two versions in its Type I and Type II variants, I luckily had acquired a DS Arms Type III receiver a few years back while they were still being produced that closely resembles that of the original IMBEL rifle.

The work that would be done as part of the build would include a complete degrease and cleaning of all the provided parts ($60), installation of the barrel including indexing and headspacing to the receiver along with a function check ($165), and inspection and assembly of the parts ($60). Due to the condition of my parts kit, we decided to not have the rifle refinished, but rather leave it with some minor “weathering” for character. My parts costs were as follows: stock set, $94.95; gas piston, $29.95; cocking handle, $39.95; and magazine, $19.95. The total cost of the work and parts from DS Arms came in at just under $470. This cost, combined with the $450 I paid for the receiver and the $450 I had paid for the kit, left me looking at around $1,370 in total cost for the rifle. Not too shabby for a semi-automatic 7.62x51mm rifle, let alone as interesting a variant as this one.

I shipped the kit and the receiver to DS Arms and then waited for the call back to let me know that the work was done and that the rifle was being shipped back to me. The rifle that I received was a sight to behold. The DS Arms/IMBEL rifle I had in my hands was a rifle that had some slight exterior wear and tear that gave it some personality. The lower receiver, top cover, carry handle, sights, gas block/regulator, barrel and muzzle device had seen some use, with surface scratches and rounded edges. However, the parts were serviceable and solid.

The Type III receiver and cocking piece had a crisp new Parkerized finish but nonetheless blended in well with the original parts. I will say that the new stock set was a little too “clean” for my tastes and that I would have preferred to run with the original stock set, but I understood the need for the 922(r) compliance parts and had also been informed by the gunsmith that the original stock set was a little too long in the tooth and needed to be replaced. As a nice touch, DS Arms included the original “take off” parts with the rifle so I could have them as reference pieces.

I did note that some of the dimensions on the new stock set seemed different than the original IMBEL parts (for example, the original forearm is a tad longer and has one more vent hole on the bottom than the replacement unit). I suspect this is due to differences between the Austrian pattern of the DS Arms parts and the Brazilian pattern of the IMBEL ones.

For those with a penchant for collecting rare and uncommon variants of military-pattern rifles, particularly those from the Cold War era, parts kit builds such as this project are a great option. By keeping an eye out for interesting finds such as this IMBEL kit, as well as locating a skilled and qualified builder such as DS Arms, you can have a unique custom-built addition for your personal collection. 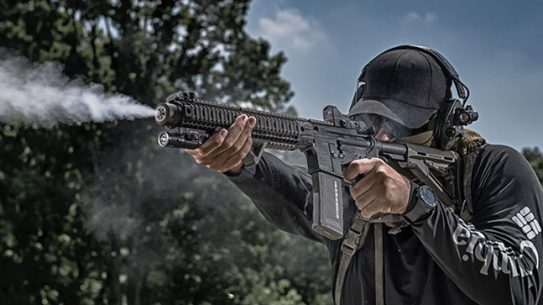 With a simple attachment to your Picatinny-style rail or KeyMod handguard, these lights &...