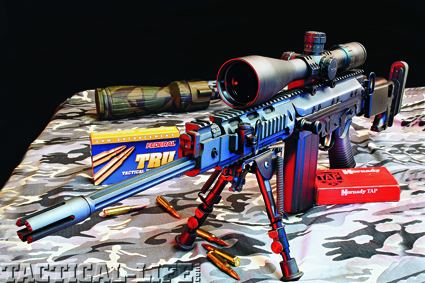 In the events following 9/11, the rigors and changing circumstances of combat in Iraq spawned a number of changes in our military forces based on mission specific needs identified by the troops on the ground. One of these was the call for a weapon with greater range than the M4, while remaining shorter in length than the standard M16A2/A4.  Further, the new theater of battle thrust infantrymen into heavily populated urban areas where snipers were taking shorter-range shots and often needed to engage numbers of enemy combatants quickly. This contrasted with past conflicts where snipers took single long-range shots, then disappeared.  A weapon that was highly accurate, while capable of quick, successive precision fire was needed, and hence the Army held the Semi-Automatic Sniper System (SASS) trials, in which a number of US manufacturers would vie for the production of such a weapon. The proposed weapon initially called for an upper receiver to convert existing weapons, and was designated the Special Purpose Receiver, but later it was decided that a whole weapons system was needed, thus SPR came to mean Special Purpose Rifle.

One of the manufacturers who submitted a design in the trials was DS Arms with their rendering of the SPR; a 19-inch barreled FAL rifle with several upgrades. The FAL is a gas-piston operated battle rifle originally produced by FN in the 1950s. The FAL garnered such a reputation for reliable functioning in harsh environs that the armies of over 80 countries adopted it, earning it the nickname “The Right Arm of the Free World.” The DSA SPR didn’t win the contract, but the SASS program became the impetus for a new rifle.

In the fall of 2009, I was jawing over FAL accessories with DS Arms’ Marc Christenson when he asked me if I’d like to test a new FAL rifle… the Short SPR, an abbreviated version of the SPR.  They have taken the concept in another direction, designing a weapon for a sniper team scout, or a designated marksman. In the LE world, the weapon might serve a police marksman. As an unabashed fan of both the FAL and DSA, I accepted Marc’s invitation to test the Short SPR. 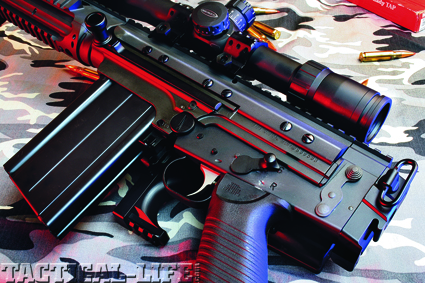 Mag release is under the lower receiver, just aft of the mag well, on the right side. Bolt release or “hold open device” is just to the left of the mag release.

The SPR is simply an SA58 FAL modified for the SASS mission. The Short SPR is just what it sounds like, a shorter version of the original rifle. The upper and lower receivers are standard FAL fare with the upper being forged 4140 steel machined to original Steyr blueprints, heat treated to a hardness of Rockwell C 30-40. Lowers are forged 7075-T6 aircraft grade aluminum alloy. Both are CNC machined.

An NP3 bolt and carrier are used; the carrier has sand cuts on its exterior to channel out grit and grime. All other parts are heat-treated investment castings. Barrel is 16 inches fluted, with a Vortex flash suppressor, bringing the length to 17.25 inches. DS Arms uses Thompson Center barrels that are broach cut, hand-lapped chrome-moly with a 1-in-10-inch twist and four grooves. They are double stress relieved, then cryogenically treated, and receive an 11-degree crown.

A short, fully adjustable gas system is employed with a corresponding rail interface short handguard, which provides numbered Picatinny rails top, bottom and sides. CNC machined from 6061-T6 aluminum alloy, they’re hardcoat anodized and were designed to withstand the abuse of an M203 grenade launcher. In conjunction with the Extreme Duty Scope Mount atop the upper receiver, the handguard unit forms a continuous rail from the rear of the receiver to the gas regulator. Forward of the regulator, a Picatinny gas block is used.

The polymer SAW pistol grip features a trap door at its bottom, forming a compartment inside to store small items. A standard safety selector switch is employed. DS Arms’ Speed Trigger achieves an improved pull by changing the geometry of how the trigger works against the sear, and honing and stoning the contact surfaces of the sear and hammer.

The side-folding SPR buttstock is quite a piece of engineering. Machined from solid 7075-T6 aluminum, hardcoat anodized and finally finished in DuraCoat, the stock not only folds to reduce overall length, but is adjustable for length of pull and vertical plane, as well as being rotatable. The cheekpiece adjusts for height, and a Picatinny at the bottom of the stock allows for the attachment of a monopod. Overall, the gun is finished in phosphate and DuraCoat.

After taking delivery of our test gun, we found it to be excellent in fit and finish. We were especially impressed with the design and execution of the side-folding SPR stock. DS Arms could have easily chosen to simply put a highly adjustable stock on the gun such as Magpul’s excellent PRS, but they went the extra mile to design and produce their own.

Obviously, we needed good optics to exact the most of the rifle’s capability and chose to mount Weaver’s new Tactical series in the 4-20x50mm Mil Dot 30mm model 800360. The rugged 30mm tubes are of one-piece construction, and argon purged.  At 28 ounces, the scope is waterproof/ shockproof/fog-proof, and features fully multi-coated lenses with extra hard exterior coatings. Boasting powerful 5x magnification, first focal plane reticles, side focus parallax adjustment, reset-to-zero turrets and Mil Dot reticle, this scope has plenty going for it at a retail of $890.95. 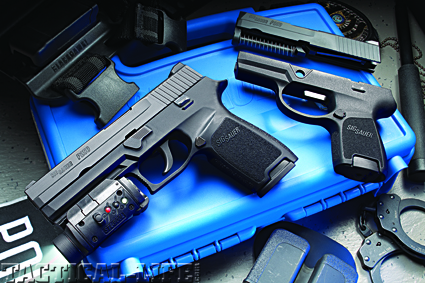 The Short SPR, based off DS Arms’ SASS rifle, provides LE officers with a…