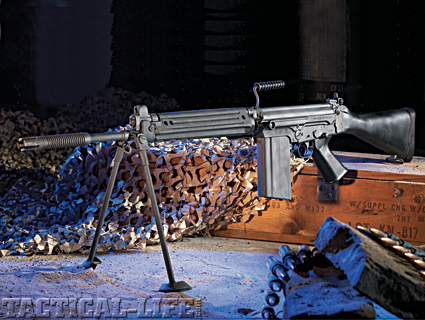 One of the great ironies of the 7.62x51mm FAL pattern rifle’s history is that, for being one of the most prolifically produced military arms of the 20th century, it was never involved in any conventionally recognized traditional war. However, as the only rifle design to give the Kalashnikov real competition in regard to distribution and total numbers produced, it should come as no surprise that the FAL (Fusil Automatique Léger or “light automatic rifle”) has played a prominent role in hotspots around the world.

Developed by Belgian armsmaker Fabrique Nationale (FN), adopted during the Cold War era by nearly 100 countries, and manufactured in both metric and inch patterns under license around the world, the FAL would deserve a place in any firearms history simply for the sheer number produced. However, the design itself is an outstanding and fully capable weapon, one with many strengths that have contributed to its broad-based acceptance. It was these very strengths that drew Illinois based DS Arms to the FAL design specifically, the Austrian StG 58 variant of the design.

So what exactly is the FAL-pattern rifle upon which the DS Arms rifles are based? Beginning in the years leading up to World War II, the FAL was designed by Fabrique Nationale’s chief arms designer, Dieudonné Joseph Saivé. The FAL rifle that eventually appeared was extremely advanced for its day, featuring modern ergonomics through its vertical pistol grip and separate buttstock and a detachable double-column magazine. While the rifle broke from the traditions of the past aesthetically, it also was quite innovative mechanically. 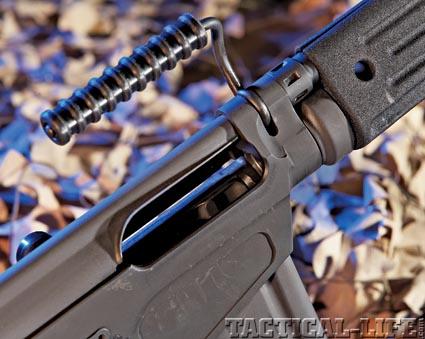 One of the more unique characteristics of many FAL-pattern rifles is a folding carry handle located on the forward portion of the upper receiver.

The FAL features a fully adjustable piston-driven gas system with a regulator sleeve. The gas system’s piston and spring are captured by a gas plug located in the forward face of the front sight assembly. Gas bled through a small port in the bore drives the piston rearward to cycle the action and the size of this port can be manually adjusted by turning the numbered gas regulator sleeve, located just forward of the handguard and just behind the front sight assembly. The sleeve can be adjusted with the use of a specially designed spanner wrench or the tip of a bullet.

Rather than a two- or three-position regulator, the FAL’s system features seven numbered marks with a total of 14 points of adjustment points, allowing users to adjust the gas system to permit just enough gas to cycle the action while minimizing fouling and unnecessary wear on the rifle.

In addition to the highly adjustable gas system, the FAL also features a somewhat unconventional locking system. Rather than employing a more traditional rotating bolt, the FAL features a tilting-block locking system where the rear face of the bolt body locks into recesses machined into the stressed-steel receiver just to rear of the magazine well.

Controls of the FAL are simple and instinctive with a non-reciprocating charging knob located on the left side of the upper receiver and a rotating safety lever located above the pistol grip. The safety has two positions: an “S” position for “safe” and an “E” position for “fire.” A paddle-style magazine release is located just behind the magazine well and forward of the triggerguard. A bolt release button is located just to the left of the magazine release lever.

Although the Austrian StG 58 was an FAL-pattern rifle, it did have some distinct differences from the Belgian original. One of the most prominent differences between them is the rifle’s muzzle device. Major Stoll, the head of the Austrian purchasing commission, designed the device itself. This unique design is a multi-purpose flash suppressor that can also be used for grenade launching and barbed-wire cutting. Threaded internally for a short length, the combination unit is designed to fit over the barbed wire and then twisted to capture it. When a shot is fired, the barbed wire is cut.

Other changes to the Austrian FAL from the original Belgian pattern included a straighter comb on the buttstock, a redesigned quick-release gas plug and a shorter gas tube soldered in place. In the general configuration of the rifle, the Austrians took some cues from the German G1 FAL variant, specifically through the StG 58’s use of steel handguards and a folding bipod.

The rifle that resulted was adopted in 1958 as the StG 58. The first 20,000 StG 58s were produced directly by FN, giving Steyr time to prepare the tooling and set up production in Austria. After that, Steyr took over the manufacturing of the rifle and produced roughly 8,000 to 10,000 of them a year for a total of more than 150,000 units. The rifle remained in service with Austria until it was replaced in the late 1970s by the StG 77, known to most as the Steyr AUG. In the 1990s, DS Arms entered the picture. 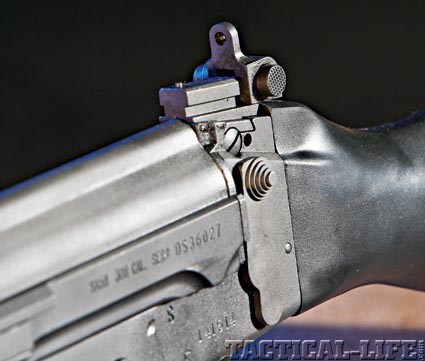 The sights of the STG58 are basic military-style units, with the rear sight made up of a windage adjustable peep unit.

DS Arms (with the “D” and the “S” standing for Dave Selvaggio, the company’s founder and president) has a long history with the FAL pattern rifle, having begun roughly 20 years ago as an importer of FAL parts, kits and accessories. It was this background that led the company to eventually produce complete rifles here in the United States.

Through its business connections within the FAL community, DS Arms learned in the mid-1990s of a unique opportunity with Steyr in Austria. Steyr had been producing the StG 58, an Austrian variant of the FAL rifle, for the Austrian government under license from FN until it was superseded by the Steyr AUG StG 77. Steyr was interested in selling off the tooling, blueprints and spare parts for the FAL-pattern rifle. DS Arms jumped at this rare opportunity and purchased 40 tons of parts and manufacturing equipment and moved it to their facility.

The result was a metric-pattern FAL rifle chambered for 7.62x51mm built to correct specifications on original tooling, all right here in the United States. These rifles became the SA58 line of semi-automatic rifles unveiled by the company in 1997, employing a combination of both original and newly made parts along with newly made semi-automatic receivers.

DS Arms’ receivers themselves deserve particular mention. CNC machined from a drop forging of 4140 steel that weighs in just over 9 pounds, the DS Arms receiver takes roughly 8 hours to fully manufacture, including heat treating and finishing. DS Arms offers them in two basic versions: Type I and II.

The Type I receiver is the standard version and replicates the dimensions and configuration of the original FN-produced version. It is available in two configurations, one for a carry handle and the other without the carry handle cuts. The Type II receiver is patterned after a later FN receiver and features lightening cuts. Both are equally as strong with the primary differences being simply cosmetic. 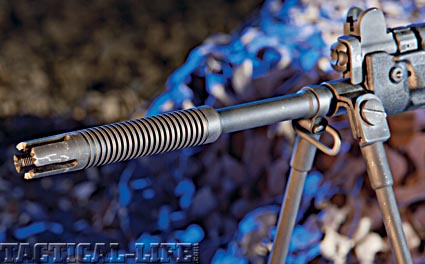 Although the tooling, blueprints and parts that DS Arms purchased were designed to manufacture the StG 58, the SA58 line of semi-automatic rifles the company produced developed into a broad and extremely modern line of rifles ranging from precision rifles to entry-style guns. The result was a series that had become somewhat different than its original source: the Austrian StG 58.

However, DS Arms does offer an interesting FAL that is more true to the design’s Austrian roots. This rifle, the STG58, stands apart from the rest of the SA58 line of rifles from DS Arms by more closely approximating the StG 58 FAL.

The semi-automatic-only STG58 as offered by DS Arms is a very close rendition of the original metric-pattern StG 58, combining excellent-condition contract FAL parts and new US made ones where required. The rifle features an original steel lower receiver, steel handguards, bipod and original flash suppressor (although an optional muzzle brake is also offered). Obviously, DS Arms does not recommend trying to use the barbed-wire cutting feature of the muzzle device. The new US parts in the rifle are the receiver (cut for a carry handle and available in either Type I or Type II configurations), hammer, trigger, sear barrel, pistol grip and gas piston.

The complete rifle features a matte Parkerized finish on its steel parts. The 7.62x51mm rifle weighs 10.4 pounds due in no small part to its steel lower receiver, steel handguards and matching bipod. It also features the traditional folding carry handle on its receiver. Sights are a windage adjustable peep rear sight and an elevation adjustable protected post front sight.

DS Arms offers the STG58 in three variants: a traditional version with an original style 21-inch barrel with a retail price of $1150, and two carbine variants with either 16.25- or 18-inch barrel priced at a suggested retail of $1200.

The STG58 I received for testing was the traditional-style variant with the 21-inch barrel, built on a Type II receiver. It came packed in a hard plastic case along with a manual and one 20-round magazine. The fit and finish of the rifle was outstanding, and the Parkerized finish was evenly and attractively applied. Once I had run a patch through the rifle’s bore and lubricated it, I packed up the STG58 and a selection of Black Hills, Federal and Remington ammunition and headed out to the range to put it through its paces.

During the entire evaluation and many boxes of ammunition there were no malfunctions. The rifle operated without a hitch and all controls functioned correctly. The trigger broke a bit heavy at 8.75 pounds. Accuracy was good, particularly considering the fact that open iron sights were used rather than an optic. However, I did note that the rifle exhibited a slight tendency toward first-shot fliers in its groups. Due to the size and weight of the rifle, perceived recoil was pleasant.

Final Notes
To be frank, the DS Arms STG58 is one of the best deals in the FAL market today. I had suspected this was true ever since I saw it first appear as an offering on the company’s website, and this belief has been reinforced now that I had a chance to try the rifle out myself. Combining DS Arms quality, a reasonable price point and historical significance, the STG58 offers a lot to someone looking to purchase a semi-automatic 7.62x51mm rifle.

One of the great ironies of the 7.62x51mm FAL pattern rifle’s history is that,…