I don’t know who coined the term “Black Rifle” in reference to the AR-15. It has been a couple of decades now at least, since I first heard it. A book entitled The Black Rifle: M-16 Retrospective written by Edward C. Ezell and R. Blake Stevens was published in 1992. If memory serves there was a book with “Black Rifle” in the title in the early 1980’s as well.

Regardless of who coined the term or when, it could have been Gene Stoner for all I know, the moniker stuck. Black Rifle is a now an all-encompassing term used to cover not only the M-16 class but all rifles built around the original Stoner AR-15 patent.

The irony of the situation is that as the black rifle has become more mainstream it is has taken on color. Yes, some folks will always customize their guns and coat them in bright, flashy colors. The color change we’re seeing in the black rifle market is a bit more pragmatic or practical.

You see, other that crows, panthers, and certain bears, solid black is not a color that is found in nature. Our warfighters are deployed to areas where they are surrounded by brown, tan, sage green and grey colors. The subject of our review is a rifle finished in a desert mirage pattern.

DSA ZM-4
DS Arms, or DSA for short, is famous for their modern treatment of the classic FN-FAL rifle. What many may not be aware of is the fact that DSA also puts together a pretty decent AR or black rifle.

DSA’s version of the Stoner design is called the ZM-4. Essentially the ZM is a standard, direct gas-impingement rifle chambering the 5.56mm (.223) round. The model featured within is the rifle length version.

The ZM-4 rifles are available in a variety of barrel lengths with myriad stock and accessory options. Let’s take a moment and consider the configuration and specifics of my model.

At the heart of the rifle is a 20-inch Chrome Moly barrel with a 1-in-9-inch twist. Affixed to the end of the tube is a Phantom flash-hider/muzzle brake from Yankee Hill Manufacturing. The gas block is a Picatinny rail version. Surrounding the barrel is a one-piece rail system also from Yankee Hill. The aluminum quad-rail allows the barrel to free-float and offers attachment points for any of your tactical accessories.

As this rifle is expected to utilize an optical sight of some sort, the upper received has a flattop rail. No iron sights were included. The charging handle was improved by the addition of a Badger Tactical Latch.

Moving down to the lower receiver, the normal triggerguard was replaced by MagPul’s aluminum Enhanced Trigger Guard. The trigger mechanism came from Chip McCormick and it is their 4.5-pound match grade design.

Regarding furniture, the pistol grip and stock were both procured from the MagPul catalog. The grip is their Miad (Mission Adaptable) modular design and the stock is the PRS. The PRS (Precision Rifle/Sniper) has adjustment knobs for stock weld and length of pull as well as two separate sling-mounting points. 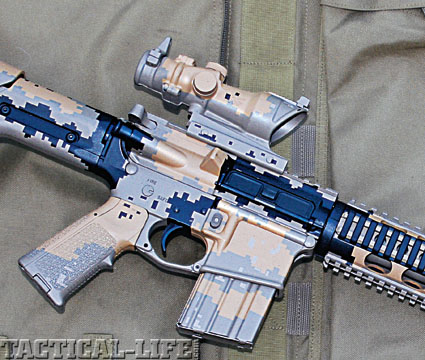 The rifle arrived from DSA with a Trijicon ACOG 4×32 sight in place. Trijicon builds a number of “Advanced Combat Optical Gunsights” or ACOG’s. This model is the TA01NSN with a 5.56mm bullet drop crosshair reticle. It has 4-power magnification and a 32mm objective lens.
Since it’s a Trijicon product you know Tritium is involved. There are back-up iron sights mounted atop the optic. The front sight has green Tritium insert and the rear sight is a simple peep.

As for the reticle, the center of the crosshairs shift from black to an illuminated yellow as the available light begins to fade. Elevation and windage adjustments are three clicks per inch at 100 yards. The adjustment knobs are the coin slot variety and the adjustment caps are sealed with rubber gaskets.

For my range work I employed .223 ammunition from Black Hills, CorBon, and Federal. These were mid-weight loads in the 55- to 60-grain range. The initial range testing was performed from 100 yards with the rifle laid snuggly on my field pack in a BlackHawk gun rest.
Bottom line up front, every round of .223 ammunition that I loaded into the rifle cycled without flaw. The CorBon load was their 55-grain BlitzKing. The Federal round was a 55-grain Hi-Shok and the Black Hills was a 60-grain V-Max bullet. As with any repeating action firearm function is the top priority, accuracy comes next. 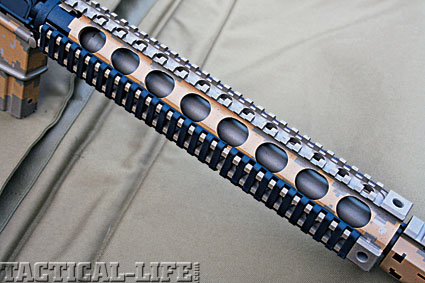 In the accuracy department the ZM-4 was up to par. Keeping in mind that the ACOG is 4x and I was using a pack for a rest, I was still able to squeeze out some very decent groups. Each load clustered below 2 inches.

The McCormick trigger felt great and had a crisp, consistent let off. Were I to pull the ACOG off of the rifle and replace if with a high-powered optic I feel assured that the group sizes would shrink. However, how small do you need groups to be in order to be effective?

After testing on bull’s eye targets I moved to humanoid silhouettes. Settling the crosshairs on the head, I was able to put three shots center mass (face) in 10 seconds. The resulting shot triangle was no bigger than 2 inches.

I reset the shot timer and pumped ten rounds into the center mass of the target in 9.8 seconds from 100 yards. This time the resulting pattern spread out to an average of 5 inches. Is this practical accuracy? I would offer that it its. 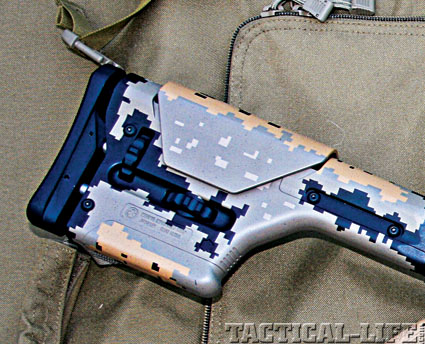 Final Notes
While they might be famous for their FN-FAL style rifles, it seems apparent to me that the folks at DSA know how to build a black rifle as well. The ZM-4 proved a solid performer and included a host of upgrades that shooters demand.