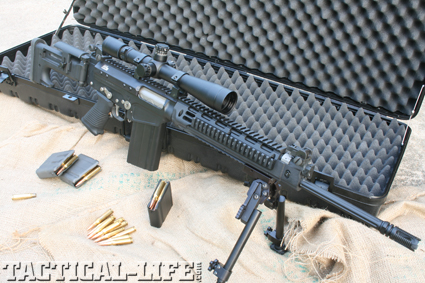 The term SASS has several meanings. In the cowboy shooting community, it stands for Single Action Shooting Society. When I was a member of the US Marine Corps Security Forces, SASS stood for Special Ammunition Storage Space. The Global War on Terror has given us a new definition for SASS: Semi-Automatic Sniper System. 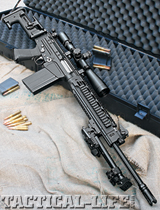 Historically, the US military focuses heavily on trained long-range marksman snipers, during active conflicts. When the conflict ends, snipers are put on the shelf and forgotten about until trouble arises once again. As we all should realize, 9-11 brought trouble to our doorstep and the US military responded. With active campaigns in both Iraq and Afghanistan, Army and Marine Corps snipers were put to immediate and effective use.

The standard equipment for our precision marksmen was either the Army’s M24 or the Marine’s M40. Both are bolt-action rifles based upon the Remington 700 action. While the role of the sniper is always to place well-aimed single shots on target, their area of operation changed drastically from the jungles of Vietnam (we always train for the last war we fought).

In the built-up, urban areas of Iraq, a sniper’s shot was much closer than the historic norm. More importantly, rather than kill a single HVT (high value target) and slink away, snipers are now providing protective over watch and engaging numerous bad guys in a single engagement.

The US Army recognized this trend and decided that they needed a rifle that could put accurate, repeating fire on the enemy. Rather than simply focus on a rifle, they wanted a complete system for their shooters. Hence, the concept of the Semi-Automatic Sniper System was born.

The Army provided several specific requirements for the rifle. For starters, the rifle had to be chambered in 7.62x51mm NATO (.308) and designed to excel with the Army’s M118LR ammunition. M118LR is match grade ammunition that uses a 175-grain OTM (open-tip match) bullet. Those on the commercial side of the house know this as the Sierra MatchKing BTHP.

Additionally, the SASS rifle, designated as the XM110 had to be “shoulder fired, man portable…capable of delivering precision fire primarily on anti-personnel targets out to a range of 1000 meters.” This was a tall order and one that numerous US manufacturers were ready to fill.

Gun Details
DS Arms (DSA) has been producing high quality rifles based on the FN FAL design for many years. DSA’s entry for the Army’s SASS trials was their SPR or Special Purpose Rifle. The SPR is a gas-operated, semi-automatic rifle based around the SA58 design. This .308 self-loader has a number of attractive features. Starting from the front, the 19-inch fluted barrel has a Yankee Hill Manufacturing (YHM) muzzle-brake/flash hider. Moving rearward you will notice a Picatinny gas block onto which a YHM fold-down, front sight is mounted. The entire package is finished with a tough DuraCoat. My test rifle came with a Versapod bipod and a Picatinny adapter.

A four-way aluminum accessory rail surrounds the barrel and is mated to the flattop, Picatinny receiver. On the rear of the receiver is a YHM flip-up, rear sight. The stock has an adjustable cheek piece and length-of-pull. It can be folder over the right side of the receiver for compact storage. The rifle is fed by metric FAL magazines and the SA58 SPR does have an automatic bolt catch when the magazine runs dry.

The semi-auto action includes DSA’s “Speed Trigger” mechanism. This is very similar in theory to the old set triggers. At the front of the SAW-style pistol grip just below the triggerguard, you will see a protruding button of sorts. Depressing this button with the middle finger reduces the trigger weight significantly to a match weight pull. The shooter can also fire the rifle with the standard trigger pull. An ambidextrous manual safety was also included as an extra.

Atop the receiver, I mounted a Leupold Mark 4 tactical riflescope. This optic has a Mil-Dot reticle, a side focus dial, and 1/4-MOA (minute of angle) target knobs. The tube is 30mm and the objective lens is 40mm. Naturally, this scope is waterproof, fogproof, has coated lenses and comes with solid Leupold reputation.

The Mil-Dot reticle has become the standard set up that US Army and Marine Corps snipers swear by. There is an excellent website dedicated to the Mil-Dot sighting system. It is aptly titled mil-dot.com. On the website you can find a complete explanation of the Mil-Dot design and concept, and even use an interactive practice session.

Range Time
As the SASS rifle specification called for the gun to excel with M118LR ammunition, my first load to test was the Black Hills 175-grain BTHP (OTM) load. This was the load that I used to zero in the scope. Other .308 loads included those from CorBon, Federal, Hornady, and Winchester. My initial benchmark work was set for the standard 100 yards.

Shooting at paper is enjoyable to a certain point before you need to shoot something that reacts. There are rifle-grade steel targets set out at 250 and 350 yards on my home range. On a solid platform, peering through a Leupold spotting scope, I decided to try out the hold over technique. The steel plates were 8-by-8 inches, roughly the preferred zone on a human torso.

From 250 yards, I held the horizontal crosshair on top of the plate. This put the first dot down at the bottom. Using the 175-grain load, I was able to smack the plate with the first shot. Switching to the point-of-aim and point-of-impact, I applied ten clicks of elevation. The next shot was a hit, but at the bottom of the plate. One more click put me in the center.

Returning to my 100-yard zero I took aim at the 350-yard steel plate. This time I held the first dot down in the center of the target. My shot was on target, but I sensed it seemed a bit low. Moving the dot to the top of the plate put my shots in the center. The wind for the day was negligible.

As for click adjustments at 350 yards, I found that I needed a full 22 clicks of elevation added to the Leupold Mark 4 Tactical Scope to achieve center plate hits. I continued banging away on the steel.

One chink in the armor that I discovered was that the barrel, though fluted, did indeed heat up after repeated shots causing the shot groups to spread out. After five to ten rounds fired in rapid succession, I needed to let the weapon cool to bring the zero back. This naturally is a trade-off. A heavy barrel would hold zero longer but would also add extra weight to the rifle. If you are carrying this gun over hills and dales this is something to consider.

Also, the SPR is not kind to brass. This is historically an FAL issue. While the brass is by no means “ruined,” it does end up with noticeable “dings” and small dents. This can be maddening for re-loaders. However, if all you shoot is factory fresh ammo it’s a non-issue.

Final Notes
The DS Arms SA58 SPR .308 rifle certainly possesses many of the attributes that precision marksmen desire. It has custom features galore and the “Speed Trigger” set up is a unique way to alleviate the standard battle rifle trigger weight and allow for a crisp precision pull. The four-way rail system also allows you add features such as IR laser target designators. The SA58 or FAL design is certainly tried and true and needs no endorsement from me.