0
SHARES
4
VIEWS
Share on FacebookShare on Twitter
With an AR-15 set up to make the most of its inherent flexibility, select tactical team members can adapt their weapon to the mission, changing from dynamic entry to tactical marksman in a moments notice.

There is no doubt that the AR-15 and its almost limitless level of variants and manufacturers is simply the number one rifle of choice for civilians and law enforcement personnel. One of the many reasons the AR-15 is so popular is its “modular capability”—the ability to adapt to a wide variety of situations and missions—often by simply changing the upper. This capability has been explored more and more since the AR-15 popularity boom, but the majority of owners, particularly law enforcement users, may not have used this capability to full advantage.

Due to manpower or budget constraints, snipers may not always be able to deploy as snipers if the team comes up short on entry personnel. These SWAT snipers end up having to haul around two separate rifle cases to every callout, not knowing which weapon they will end up fielding—their M4 Carbine or their scoped .308 bolt gun. 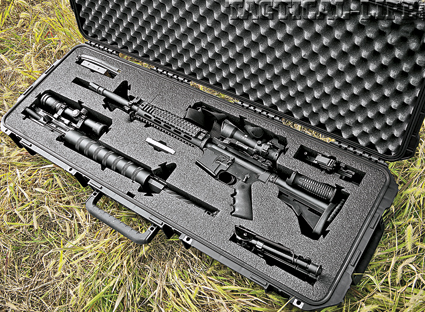