by Mike Boyle
in Uncategorized
0

0
SHARES
34
VIEWS
Share on FacebookShare on Twitter
The arrangement of an officer’s gear on his belt is equally important as the type of equipment that is employed. Take a hard look at how your gear is arranged and if it will help you in an emergency. Jeff Rose photo

Today’s uniformed patrol officer carries more gear on his duty belt than Batman, and as a result, space is often at a premium. In addition to a holster for the service pistol, the duty belt has to accommodate a magazine pouch, handcuff case, OC spray, expandable baton and portable radio. Many officers also carry an Electronic Control Device (ECD) on the support-side hip. All of this gear not only weighs you down, but it takes up room on the belt. 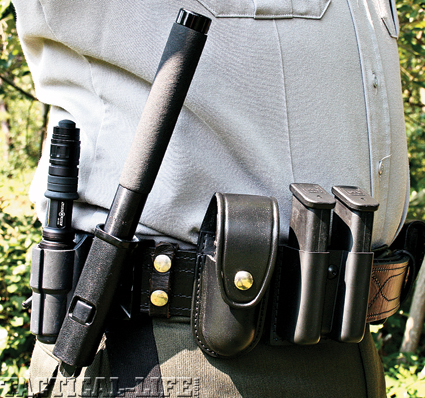 All vital accessories should always be positioned around the front of the belt. That way they are easily accessible to either hand in case of emergency.

At a recent ILEETA (International Law Enforcement Educators and Trainers Association) conference, I had the good fortune of taking in a class entitled, “Hindi Duty Belt S.A.F.E.T.Y. and Survival System.” Officer Robert Hindi of the Las Vegas Metro Police Department, who developed the concept of an extremely efficient duty belt, taught this class.

Faster, Stronger
The Hindi Duty Belt S.A.F.E.T.Y. (Safer Accessibility Faster more Effective Tactics for You) System is a very intelligent way of setting up the police duty belt. Other than positioning of the holster, I’m convinced most coppers cannot articulate why a particular piece of equipment is in a certain location. I have noted magazine pouches positioned in such a way where it would be next to impossible to perform an efficient reload. Expandable batons and radios are often placed directly behind the holster, where they might interfere with the draw stroke. 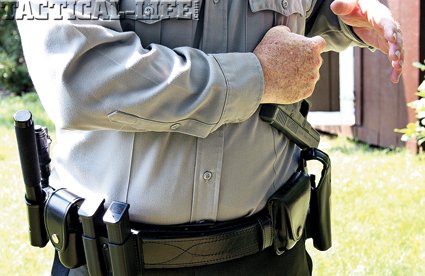 The Gould & Goodrich K340 Double Retention Duty holster features an intuitive “twist and up” draw stroke, which allows you to draw with your support hand if need be.