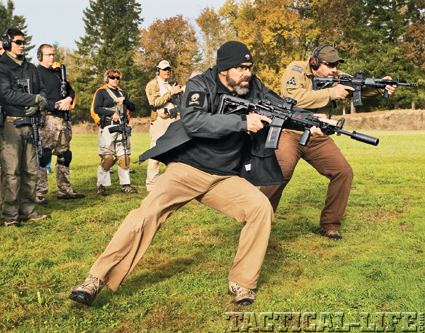 To check out the company that has sold more than 1.5 million polymer magazines and whose training division raised the bar on instructional videos with its Art of the Dynamic Carbine (1&2), Art of Dynamic Handgun and Aerial Platform Operations Series, TW stepped inside the Magpul Dynamics’ Dynamic Carbine Course in Hammond, LA to see if these guys are as good as their videos.

Dynamic Carbine 1: Building the Fundamentals
“We will give the students an honest snapshot of themselves, very quickly,” says Chris Costa, Magpul Dynamics Instructor. The Dynamic Carbine 1 course brought together shooters from across the country and throughout the range of shooting experience. There were several husband and wife attendees, a father and son, as well as law enforcement, hobbyists, and professional security contractors. After a detailed safety briefing, instructors Costa, Haley, and Olivella began building up the fundamentals in their students. Starting with basic body position, stance, and trigger control, the class moved to confirming zero on their optics. Once zeroed, in-depth work began on sight picture/sight alignment differences at ranges from 5 to 50 yards. Reload techniques such as speed (under fire), tactical (in action, but covered), and admin (no threat, get re-organized) were covered, as well as malfunction drills (double-feed, mag failure, mis-fire, stovepipe). 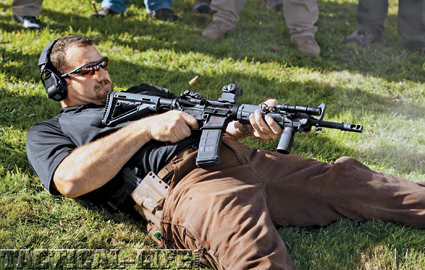 Instructor Chris Costa demonstrates the supine position. The position is a critical skill that allows shooter to tactically recover from a slip or dramatically reduce his profile while continuing to deliver well-aimed shots under fire.

As the course continued over the next three days, BSA drills (“Balance of Speed and Accuracy”) became a common element. The BSA drill measures timed rounds into an 8-inch center-mass circle on the man-sized Magpul targets. Students were encouraged to push their limits from standing, kneeling, and prone positions at varying distances. The targets told the tale: If the group was too tight with no hits outside the circle, speed was lacking. If the group was scattered outside the circle, the shooter should slow down and concentrate on body position and accuracy. This litmus test gave each student instant feedback at every drill as to how fast he/she could push the rifle and put combat-effective hits on the target. 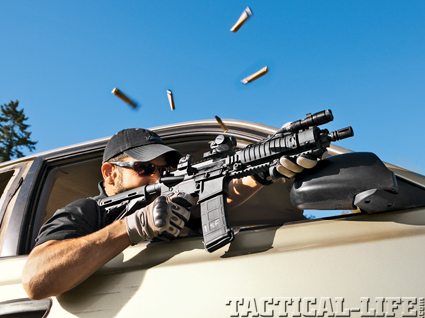 Magpul tests both decision making and weapons handling skills. At left, a student engages multiple targets from the open window of a vehicle.

On the afternoon of day two, the instructors conducted a “mini” handgun course. While the handgun is typically a class unto itself, the transition to the handgun in the event of a carbine malfunction at close range is a crucial skill and would become a part of many of our subsequent drills. Day three brought a significant increase in the pace of the drills, which now included weapons transitions, timed speed events, movement to multiple targets and barricade obstacle shooting. Dynamic Carbine 1 ended with shooters more confident, competent, and mindful than when they arrived.