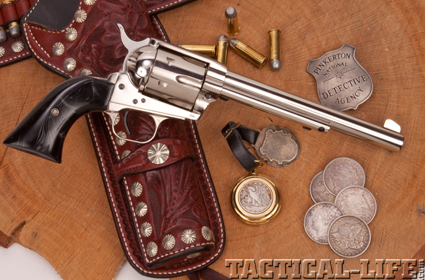 The nickel-plated Big Bore Bounty Hunter is a rugged sixgun that can stand up to heavy loads.

I am a fan of the European American Armory’s Big Bore Bounty Hunter line of sixguns. That is partly due to an emotional attachment that goes back to when I was a teenager buying my first handgun. It was a Hawes Western Marshal chambered for .357 Mag. I loved that gun, and I soon followed it up with the same model in .44 Mag. Eventually I traded those pistols off, but I missed them so much that I bought a well-used .44 Mag Western Marshall about 20 years ago, and that one is not getting away from me.

Today’s EAA Big Bore Bounty Hunters are the lineal descendants of my old Hawes Western Marshal. The German firm of J.P. Sauer made the Western Marshal before they joined forces with Swiss Arms AG, better known as SIG. In the early 1980s Sauer acquired SIG and concentrated on producing and marketing their line of autopistols worldwide. About that time, Sauer sold their revolver operation and tooling to Herman Weihrauch Waffenfabrik in the Bavarian town of Mellrichstadt. The firm is abbreviated to HWM.

Over the years HWM has made a few design changes to the original J.P Sauer single action. The most notable modification was to establish a licensing agreement with Ruger for use of their transfer bar safety system to comply with the United States’ post-GCA’68 import rules. The resulting pistol is very much like a combination of a Colt and a Ruger, with a few unique touches thrown in.

The lock work on a Bounty Hunter is pure Colt with the addition of the transfer bar. The grip assembly is much closer to a Colt’s than it is to a Ruger. But, because it is available in .44 Mag, the cylinder is sized like the old style Ruger Vaqueros. The chambers are also countersunk in the cylinder. This is a nice touch for strength and safety, but it makes it tough for the loading table officer to verify that the hammer is down on an empty chamber.

I’ve had a .45 Colt Big Bore Bounty Hunter with a 4.5-inch barrel since 1998. In the 13 years that I’ve owned it I’ve never had a problem with it. Because it is so strongly built, it has served as my test bed for testing .45 Colt ammunition, both new factory fodder and all manner of handloads. It has served admirably in that role for over a decade. But, I didn’t feel that the short, 4.5–inch barrel was providing enough of a test. So, I decided I needed a second .45 Colt, Big Bore Bounty Hunter, but this one would have a 7.5-inch barrel. 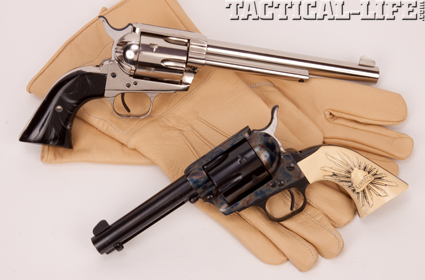 The author has owned this 4.5” barreled Big Bore Bounty Hunter since 1998. After 13 years of trouble free service it was time to complete the team with a 7.5” barreled model.

With its 7.5-inch barrel, the Big Bore Bounty Hunter is an impressive mass of nickel-plated steel. But, it still only tips the scales at 48 ounces; which is just two ounces heavier than my 7.5-inch barreled Colt SAA. All the major exterior surfaces of the Bounty Hunter are finished in nickel-plate. The base pin, action screws, trigger and back of the hammer are blued to provide a visual counterpoint to the shiny metal.

As far as looks go, I have only one bone to pick with the Bounty Hunter…the grips. For some reason HWM thinks that all of their 7.5-inch barreled single-actions require oversized grips. If your hands are the size of coal shovels, these grips may be just what you’re looking for. Luckily the normal Bounty Hunter grips, as you’d find them on a 4.5-inch Bounty Hunter, fit the 7.5-inch guns perfectly. So you can request that EAA send you a pair when you order your long barrel Bounty Hunter. I took a different approach.

I sent my Bounty Hunter off to Eagle Grips where Raj Singh’s team fitted it with a set of their ultra imitation black pearl grips. These grips are beautiful—I don’t know how they achieve it, but the grip material has a three dimensional depth and luster that photographs just can’t capture. It is almost like looking at a hologram. The black grips look spectacular against the polished nickel.

Raj also sent along a pair of checkered buffalo horn grips in his gunfighter configuration. Eagle Grips proprietary gunfighter grip design is a favorite among Cowboy Action Shooting competitors. Gunfighter grips have very thin grip panels that swell out to full size at the tops of the grips, where they meet the frame. This design provides a very secure grip that resists moving in your hand under recoil. I tested the Eagle gunfighter grips using black powder cartridges loaded with 255-grain bullets over a highly compressed 40-grain charge of 2Fg Goex powder. Calling this a full-house load barely does it justice, but the gunfighter grips kept the gun glued to my hand. I could really feel the checkering doing its job. But, as attractive as the buffalo horn grips are, the black pearl grips are still my favorite. The combination of nickel and black pearl make the Bounty Hunter look good. 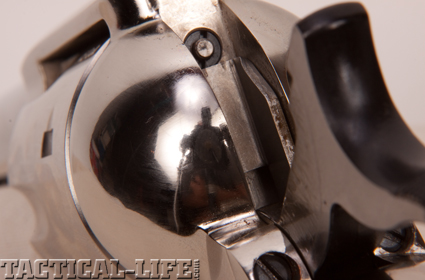 The Bounty Hunter incorporates a transfer bar safety system under license from Ruger.

From a functionality standpoint, I have two bones to pick with the Bounty Hunter. One is easily addressed, but the other is not. Let’s start with easy. The trigger pull on this gun is wicked heavy. This has been the case on every Bounty Hunter I’ve shot. On this one my RCBS trigger scale was kissing 7 pounds before the hammer dropped. The mainspring on this revolver could have come directly off the suspension of a ‘32 Ford.

The fix is obviously to install a lighter mainspring, but it isn’t quite that simple. If you put on one of the ultra light springs from Wolff or VTI, the trigger pull will indeed be light as a feather. Unfortunately you won’t be able to bust a cap. In order for the transfer bar safety system to work there is a spring-loaded pin in the back of the basepin. That pin pushes the transfer bar out so it can clear the firing pin. So, before the hammer can hit the firing pin hard enough to set off the primer, it must first overcome the backpressure from the transfer bar. With the super light mainsprings the transfer bar cushions the blow enough to keep the Bounty Hunter from going, “Bang!” 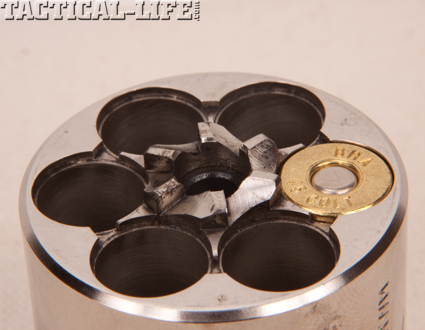 The Big Bore Bounty Hunter’s cylinder has countersunk chambers, something the author thinks is unnecessary in a firearm of this type.

On both of my Bounty Hunters I’ve installed Wisner’s medium strength Colt spring kits. The kit supplies replacements for the trigger/bolt spring and the mainspring. Replacing these springs reduces the trigger pull from seven pounds to five pounds. While that isn’t what I’d call light, it feels far better than the original spring.

Bounty Hunters have a bigger diameter screw securing the mainspring to the frame than Colts or clones. So, you’ll need to open up the screw hole in the Wisner spring. I use a pointed grinding stone on a Dremel tool. It will take you less than a minute.

The second functionality issue is with the previously mentioned countersunk chambers. Unless you are handloading on the ragged edge of insanity, I just don’t see the point of countersunk chambers. With today’s excellent, solid head cartridge cases there is no need for it. On a revolver chambered for .45 Colt, the countersinks won’t fit the larger rims of .45 Schofield cartridges. And the countersinks make it impossible for loading table officers to verify that you have an empty chamber under the firing pin. 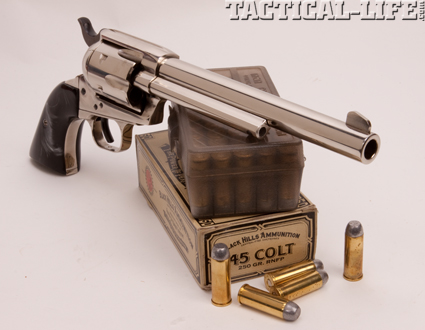 The Big Bore Bounty Hunter performed well with both factory rounds and with black powder handloads. 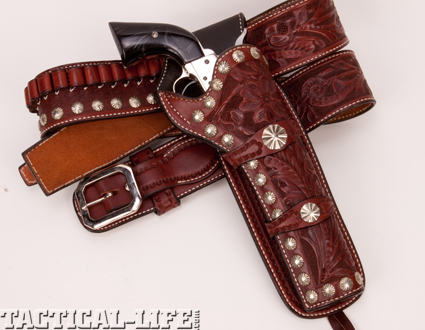 A beautiful sixgun deserves a beautiful holster, and this gorgeous Rod Kibler rig fits that bill to a tee.

I strapped on the Kibler rig, and put the Bounty Hunter through its paces at the range. I shot it with Black Hills smokeless ammunition, and with three different black powder loads. The Black Hills 250-grain round nose flat point ammunition produced an average velocity of 815 feet per second (fps). Shooting off-hand from the 15-yard line, my groups consistently measured 3 inches across. Shooting my 4.5-inch barreled Bounty Hunter for comparison produced 2.5-inch groups with the Black Hills ammunition and average velocity fell to 774 fps.
When I changed to black powder I started with a 32.5-grain charge of Goex 2Fg powder under a 255-grain big-lube, PRS bullet. Groups ranged from 3 inches to 1-inch and velocity averaged 805 fps. I was really happy with the way the 7.5-inch Bounty Hunter performed with that load. In comparison, the 4.5-inch barreled Bounty Hunter delivered another set of 2.5-inch groups, and an average velocity of 777 fps.

Just for fun, I ran a couple of specialty loads through the nickel-plated Bounty Hunter. The first load had the same 255-grain big lube bullet mounted over 40 grains of compressed 2Fg Goex. This is the classic 19th century .45 Colt load, and it really rocks. Velocity through the long barrel averaged 901 fps. Recoil was…shall we say, “noticeable.” Accuracy was quite good with 2-inch groups were the norm.
Next I fired some cartridges loaded with Lyman’s 250-grain Maxi Balls. These are muzzleloading rifle bullets that are mostly two huge grease grooves. They have to be seated deeply in the cartridge case, like full wadcutters, so there is only room for 25 grains of 3Fg powder under them. Shooting these is about on a par with shooting .45 Schofield rounds. Velocity was 751 fps, and accuracy was excellent with two-inch groups from 15 yards. The Big Bore Bounty Hunter proved that it shoots as well as it looks.

Having been shot with black powder, back at the Casa Beliveau, the guns needed a thorough cleaning. That means disassembly. It used to be that I dreaded pulling the basepins from heavily fouled single-actions. More times than I like to admit, pliers came into play. Then, two years ago at a trade show, I saw Brownells basepin puller. This is a really simple tool that allows you to pull basepins easily without marring them or the gun. It was one of my show picks of the day on the Tactical Life.com show blog. I bought one, and it is one of the best tool investments I ever made. If you shoot single actions, especially with black powder, one of these needs to be in your toolbox. Believe me, you’ll thank me for it. 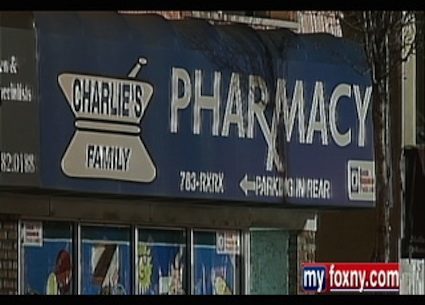 ‘Friendly fire’ eyed in death of ATF agent , who was trying to stop an ex-con from robbing a Long Island pharmacy.