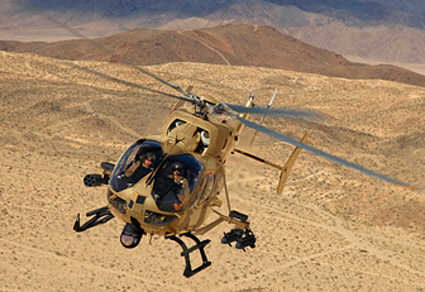 EADS North America’s Armed Scout 645 is the centerpiece of the company’s presence Oct. 5-7 at the Association of the U.S. Army’s annual convention — underscoring the helicopter’s readiness as a low-risk, highly capable and best-value solution to fulfill the Army’s current and long-term Armed Aerial Scout mission requirements.

This next-generation helicopter offering would strengthen U.S. Army capabilities in performing combat missions for both current and future conflicts while also meeting the demanding combat environments encountered at higher elevations and hotter temperatures.

The Armed Scout 645 demonstrator to be showcased at the AUSA annual meeting is the same helicopter that performed a series of successful “high/hot” flight tests in Alamosa, Colo. earlier this year. These flights validated the Armed Scout 645’s ability to meet all of the U.S. Army’s previously-stated armed aerial scout performance requirements — even in the most challenging combat environments.

During these flight trials, the Armed Scout 645 demonstrator helicopter — operating from a takeoff elevation of more than 7,500 feet, equipped with a simulated 2,300-pound Mission Equipment Package — successfully hovered-out-of-ground-effect at a density altitude of 6,000 feet and 95 degrees Fahrenheit. This is a key requirement included in the Army’s Sources Sought document issued in October 2008.

EADS North America’s Armed Scout 645 is based on the same airframe as the highly successful UH-72A Lakota Light Utility Helicopter it is currently delivering to the U.S. Army. The world-class industry team assembled by EADS North America for the Armed Scout 645 includes Lockheed Martin as the Mission Equipment Package integrator, and American Eurocopter — which will build the aircraft at its Columbus, Miss., facility where Lakotas are currently manufactured.

The Armed Scout 645’s small footprint allows an entire platoon to be transported by C-17 aircraft with minimal reconfiguration upon arrival in the operating area, while its large, unobstructed main cabin can be quickly reconfigured for maximum mission flexibility. (www.eadsnorthamerica.com)

EADS North America's Armed Scout 645 is the centerpiece of the company's presence Oct.…