0
SHARES
16
VIEWS
Share on FacebookShare on Twitter
Helicopters are the best way to get quickly to any mission, in the mountains of Austria, but sometimes the travel is a little unconventional. Their airborne capacity is enhanced by their superb “rope” skills.

Even some in the special operations community in the U.S. and around the world may not be familiar with EKO-COBRA—Austria’s high-speed, low-profile warriors in the war on terror. Those among the European Special Operations community, however, have surely trained or competed against some of these Austrian elite. They regularly win and always place in the top positions at all S.W.A.T. competitions, and have even won the sniper championship at Camp Shelby various times. Tall and fit and uniformed in black coveralls, they are not only represented in awards ceremonies, they are at the frontlines combatting terror any time it rears its ugly head in Austria.

Although operating mostly under the media radar, they are regarded by many as one of the best counter-terrorism units in the world. The EKO-Cobra or Einsatzkommando Cobra is similar in its concept to the French GIPN (Groupes d’Intervention de la Police Nationale), German GSG-9 (Grenzschutzgruppe 9), the Spanish GEO (Grupo Especial de Operaciones) or even the British SAS (Special Air Service). Any Austrian police officer can apply, but only a few pass the rigorous tests. Their training and employment is more complete than most police S.W.A.T. and covers many roles often regarded as “military.” Austria is a very mountainous country and most Cobra members are expert climbers and their mountain and survival skills are second to none. 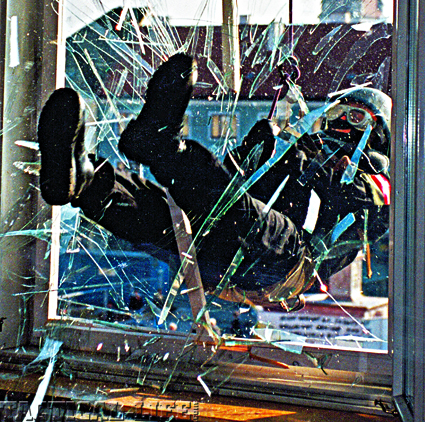 During the 70s, Jewish emigrants from the former Soviet Union were using Austria as a way-point to Israel. They had been attacked by “El Saika,” a Palestinian militant group, on their way to the airport and their El-Al flight. With the attacks on the Jewish athletes at the 1972 Olympics it became clear that Austria needed a true tactical unit. First with the Gendarmeriekommando Bad Voeslau and then in early 1978 with the GEK (Gendarmerieeinsatzkommando), Austria began its fight against international terrorism. The kidnapping and subsequent killing of Hans-Martin Schleyer, Chairman of the German Employers’ Association, by the RAF (Red Army Faction), and the associated hijacking of a Lufthansa-aircraft “Landshut” to Mogadishu provided the final impulse for Austria to build a special, unified anti-terror unit.

Pro-Active Success
Cobra has built a strong record of fighting terrorism. Some operations were huge successes and some, inevitably, were disappointing. In 1975, EKO-Cobra was involved in trying to end the OPEC siege led by Carlos “The Jackal” that held 11 oil ministers and 59 civilians hostage during the OPEC meeting in Vienna.

The terrorists successfully escaped from Austria. On the other side of the coin of this frustrating operation is the hostage rescue in Karlau prison in Graz 1996, and the Tu-154 plane hijacking on October 17, 1996, which were unqualified successes. While the plane was still in the air, the four EKO members stopped the hijacking, a feat no other tactical unit has repeated since then.