0
SHARES
361
VIEWS
Share on FacebookShare on Twitter
The 15.7-inch Picatinny rail allows snipers to mount the latest NV devices or laser designators in line with optics.

There are two Steyr bolt-action rifles that have become benchmarks in recent rifle history: the Steyr Scout all-around rifle and the SSG 08 sniper rifle. The Scout, designed by the late Col. Jeff Copper, has been with us for more than two decades and has proven to be the design to use when things get tough and you can only have one rifle. In those extreme conditions, it will serve its owner with foolproof reliability, incredible versatility and Steyr’s legendary accuracy.

On the other side of the spectrum, the SSG 08 was designed from the ground up to be an all-out sniper rifle. It’d be tough to come up with any critical flaws in its design, despite being a tad heavy, but that is a burden most sniper rifles possess in order to offset recoil. The SSG 08 has taken all the military sniper contracts it has participated in by storm, with a winning combination of accuracy, ruggedness and tactical features. Mixing these two dynamic Steyr rifles could not bring anything other than what I consider the best all-round, lightweight, law enforcement sniper rifle in the market. 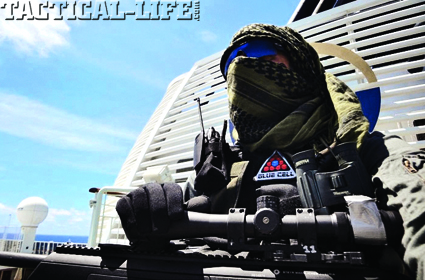 Personally, I always loved Col. Cooper’s minimalistic approach to rifles. In the numerous conversations I had with him about the Scout, we always agreed on most issues, but differed on some, too. The area of scopes was one of them. He liked optical scopes placed up front, and I wanted my Aimpoint there. I know we could have agreed on the Aimpoint issue, eventually, but not on the other controversy we had: For me, 3 kilograms (6.6 pounds) was too light for a .308 bolt-action rifle.

I don’t mean that I need any more weight, or that I like to carry those extra pounds for any obscure, masochistic tendency. It is simply because I am spoiled by so many years of shooting heavy sniper rifles and .50s. Every time I shot a Scout I loved it, but it felt too light. After every Scout experience, I called my good friend Oliver Bauer at the Steyr factory in Austria and told him, “I love the Scout and it shoots lights out, but if only you could fit my 20-inch SSG 08 barrel into it.” And he answered the same thing every time: “That’s exactly the Elite.”

So, when I was asked for a test and evaluation of the Elite, all these conversations came rushing to my mind and I accepted in no time. I wanted to know if my dream “if-I-were-only-allowed-one-rifle” really existed.

The Elite is based around the Safe Bolt System (SBS) from Steyr Mannlicher, which is one of the safest rifle bolt systems ever designed. In case of firing an overpressured cartridge or even with an obstruction in the barrel, the shooter is always protected from injuries and the rifle will survive the shot and be capable of shooting again. When I wrote about the SSG 08, I had not seen this test myself, but this has changed and I can now testify it was true! Now I know that you can fire proof rounds with extreme overpressures and feel safe. As a blown-rifle survivor myself, I believe that, with the extreme charges some shooters like me are loading in their .308 Win. rifles, having an SBS action can be a lifesaver. Shooting some of the old two-lug designs with such extreme charges, in my opinion, is a recipe for disaster. Other new action designs offer three or four bolt lugs, but the SBS does so with a multi-lug bolt and a safety bushing that fully encases the bolt lugs and the extractor. Combined, the two protect the shooter from the escaping gases and protect the action and bolt of the rifle from the overload.

The bolt has six massive front locking lugs located directly behind the cartridge case. This design is a departure from the older SSG 69 bolt design that had rear lugs. At the Austrian factory, they knew that, even considering the legendary SSG 69 accuracy, there was room for improvement. To do so, they redesigned the bolt and moved the locking lugs up front. Maybe this is one of the reasons why the new SSG 08 is simply the most accurate sniper rifle I have shot in my life. And I have shot or owned most, if not all, the sniper rifle designs on the market.

The Elite SBS bolt has some additional features that would make most rifles envious, like the ice, mud and residue grooves machined into the bolt that guarantee reliability under the most extreme environmental conditions. The grooves act as cutters that remove the crud and channel any particles that could get trapped between the bolt and the receiver during its operation.

After such a display of bolt features, reminding that all Steyr rifles have a protruding cocking indicator in the bolt, or that the bolt lever retracts and locks into the receiver, seems unimportant. The problem is that even these “less important” SBS features are lacking on many sniper rifles.

Normally, rifles have two-position safeties, but not this Austrian SBS marvel. The SBS bolt allows the shooter to select various safety and operation positions, such as Locked Safe, Loading, and Fire. The Elite also has all the famed Scout features: five-round removable box magazines (a 10-round magazine is optional) with a setting for manual loading without having to remove it from the rifle, a second magazine stored in the butt of the rifle, the aluminum receiver housing, top integral Picatinny rail, round bolt handle that locks downward against the receiver in Locked Safe mode, third attachment point for a three-point sling and the front bipod. 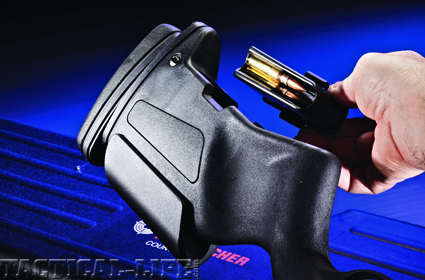 As with the Steyr Scout, a loaded five-round magazine can be stored safely in the stock for quick reloads.

The Elite barrel is also very unique in both its attaching method and the manufacturing process, too. The accuracy of Steyr’s cold-hammer-forged barrels is outstanding, and they are synonymous with reliability and long service. Cold hammer forging is a process in which the barrel is forged over a mandrel that has the lands and grooves imprinted into it. This forms the barrel with incredible precision and increased hardness, compared to traditional rifling methods. SSG barrels are known for their ease of cleaning and long life due to this ultra-fine interior barrel finish. By the way, the process leaves the traditional Steyr Mannlicher spiral mark all over the barrel length.

In most SSG/SBS actions, the barrel is screwed in, but this isn’t the case with the Scout or the Elite. The barrel is attached with a collet and a nut, which allows the shooter a quick barrel change option. The Scout has a 19-inch-long, lightweight barrel, and even if its muzzle diameter was increased by a millimeter a few years ago from the original Cooper specs, it is still too lightweight for me. 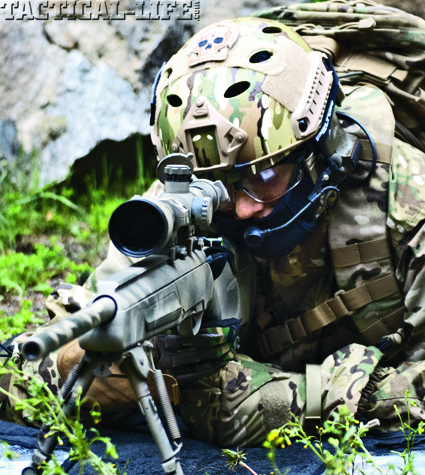 On the contrary, the Elite has a heavy barrel that is 22.6 inches long and has a 1-in-12-inch, right-hand twist. The twist selection is perfect for me, as it allows me to shoot the heavy bullets and also the 155-grain Scenars, 170-grain Lock Base and 168-grain Sierra MatchKings that I regularly use. The Elite is offered in .308 Win., .223 and 7mm-08 Rem.

Regarding the barrel length and profile, I have a story to tell. In 2009, I wanted to check the new SSG 08 against the best rifles available, so I went ahead and shot the FT/R World Championship at Bisley, United Kingdom, with a 20-inch-barreled SSG 08 and boxed Lapua 170-grain Lock Base sniper ammunition. My rifle was the shortest at the Stickleton Range, but its performance was not short by any means. To most shooters’ surprise, I placed in the middle of the pack on most 1,000-yard matches facing rifles with 30- and 32-inch barrels shooting handloads. Lesson learned: You can actually shoot one of these awesome 20-inch cold-hammer-forged barrels accurately and consistently at 1,000 yards. I would not select a 20-inch barrel if I had a longer one for these shots, but it still offered a lot of practical performance at 1,000 yards while being much handier and light.

From this experience I know the Elite’s 22.4-inch barrel shoots accurately and with plenty of bullet speed, at any sensible hunting or police sniper engagement distance. No police sniper that I know of will shoot a terrorist at 1,000 yards. The same goes for professional hunters. Not one of them will shoot that far and risk a potentially expensive miss if they can get closer to the trophy. Therefore, why carry the extra weight out there in front? Considering the Elite’s barrel length, I was sure it could shoot with extreme precision out to 800 yards.

I went to the 880-yard range and shot two different Elite rifles with my good friend, sniper instructor and hunter Gabriel Zapata, who brought his own Elite equipped with an 8.5-25×50 Leupold Mark 4 M1 LR/T with TMR reticle on Barrett 10-40 rings. Just as most pro snipers do, his rifle came with a simple Krylon camo job. My completely stock Elite came in standard black and equipped with a muzzle brake that I removed to feel the recoil of the bare barrel. I mounted a military 3.5-10×40 Leupold Mark 4 M3 LR/T on QRW rings.

We shot steel targets and a SAAB electronic target system. After checking the triggers, we shot the cold-bore zero shot and the first groups. Being a Steyr, it was not a surprise when I saw that I had printed a 0.6-MOA three-shot group at 330 yards, and that the cold-bore shot added just 0.2 MOA to this. After this, and at longer distances, all groups went under 1 MOA from both rifles at any range. The best groups where shot by my sniper friend, with two consecutive 0.5-MOA groups at 550 yards. I was wondering if he was a better shot than I am, but found that his Elite trigger was adjusted to a mere 1.5 pounds—good for my ego. Even though my trigger was nice, crisp and adjustable, it was on the hard side at 3.2 pounds on my rifle, as it came from the factory.

We only shot boxed 168-grain Federal Premium Match and Lapua 170-grain Lock Base sniper ammunition. All the groups shot for record at 330 yards were sub-MOA. The best accuracy came from the Federal load that shot well under 0.75 MOA. While the Lapua 170-grain LB did very well, too, on Gabriel’s rifle, I did not manage to get the same consistent results I got from the Federal loads. Average speeds for the Elite rifles were 2,560 FPS for the Federal and 2,460 FPS for the Lapua. Both loads retained supersonic speeds at 900 yards.

The Elite offers awesome accuracy, Col.Cooper’s Scout simplicity and features, coupled with a relative lightness at 9.2 pounds, in a tried and proven package. This is why police snipers and those interested in a “heavy-barreled” Scout should take a serious look at this rifle—not because they can’t afford the exotic SSG 08, but because the Elite may be the best 9-pound option for an accurate, mid-range, all-in-one or police sniper rifle. For more information, visit steyrarms.com or call 205-655-8299.