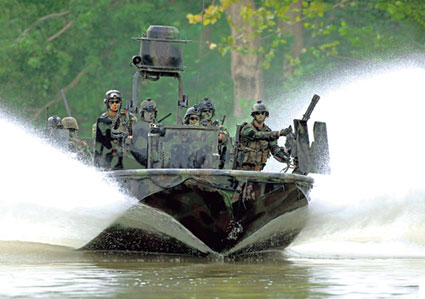 “On time. On target. Never quit!” is not a catchphrase, but a promise that Naval SWCC (Special Warfare Combat Crewmen, pronounced “swic”) operators make to their country, their brothers and themselves that they will complete their mission every time. It is the last six words of the SWCC creed. It’s an unflinching approach shared by some of the most committed military professionals alive today. It’s simple, definitive and to the point. 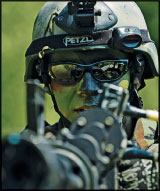 Men Of Character
“We’re looking for smart, motivated men who are intrigued by boats and engines. We want guys who want to do what we do. It’s not just sneaking around in the dark, which is intriguing, but it’s what we’re doing—running around at 100 miles an hour with our hair on fire. That’s who should be out there with us,” said Naval Special Warfare Group 4 Command Master Chief (SWCC) Rich Evans.

The Navy’s SWCC community is an all-male, all-enlisted fighting force comprised of some of this country’s best and brightest. Like the SEALs they serve alongside, SWCC operators are much more than just mindless commandos. SWCC are men of tremendous character, with the mental acumen and physical capabilities to carry out their mission.

“I don’t think there is one of our new guys coming out that even knows the word ‘quit.’ Most of the time you’re cold, you’re wet, you’re tired, but you have to be totally confident,” said Chief Special Warfare Boat Operator (SBC) Henry (last name withheld). “Anybody can go out on a perfect day and do some good things on an operation, but when you start getting run down, that’s when you really start to figure out what kind of operator a guy is.”

The nature of maritime special warfare also requires a good degree of versatility among crewmen. Everyone has to be a navigator, a communicator and everyone has to be able to drive the boat and operate all the weapons. Communicators have to be fluent in photo intelligence and a variety of communications on different networks, while multi-tasking in a three-dimensional battle space.

“You have to be able to just jump in and work every position. It’s leadership at all levels,” said Henry. “The mission planning cycles we go through, there’s no one guy saying ‘this is how it is.’ It’s every guy in there coming up with ways to get it done better.”

Road To Brotherhood
Talk to an operator long enough and you’ll hear a recurring theme: brotherhood. They are kindred souls who look after their teammates like family members—not only on the job, but on and off the water. They are truly a Naval Special Warfare family that takes care of each other and their families.

“From going through SWCC school together and then going on training missions and operations together. You feel the struggle and the pain of everything you do together and it just draws you closer. We (SWCC) are made up entirely of enlisted personnel and Warrant Officers, so all of our guys at each pay grade are responsible for a lot more than they would be in the regular Navy. So all of our guys have a lot of responsibility and we all share that burden together. That’s why we’re brothers,” Henry told us.

Individually, SEALs and SWCC go through separate, but similar, specialized training programs that emphasize special operations in the maritime environment. SWCC are trained extensively in craft and weapons tactics, techniques and procedures. Like SEALs, SWCC must also be physically fit, highly motivated, combat-focused and responsive in high-stress situations.

The road to becoming a SWCC operator is difficult. Candidates must first pass a physical screening test (PST) designed to assess the applicant’s physical ability to undergo initial training, but just because you can run a mile and a half in 12 minutes or do eight pull-ups doesn’t mean you’re ready for SWCC Basic Crewman Training (BCT).

SWCC training is based on three core pillars: character, physical and technical. The mission requires men who uphold the Navy’s core values of honor, courage and commitment. Additionally, SWCC operators must prove physically fit and capable in every environment, especially the water, and possess the mental capacity to quickly learn the new tasks associated with maritime special operations.

“SWCC volunteer twice, not only to serve our country, but again they step up and subject themselves to grueling and arduous training that most people will never experience, to become part of the elite,” said Capt, Evin Thompson, Commander Naval Special Warfare Group 4. “In other words, they are assessed and selected to be Naval Special Warfare shooters. They know their mission is essential, and they are proud to be the ones the Nation turns to in times of need.”

Boats That Carry The Firepower
Naval Special Warfare has three Special Boat Teams to which SWCC personnel are assigned: Special Boat Teams TWELVE (SBT-12), TWENTY (SBT-20), and TWENTY-TWO (SBT-22). Each is unique in its location, mission, primary designated Operational Area, and numbers and type of craft. They are all under the overall command of Naval Special Warfare Group FOUR, which is headquartered in Little Creek, VA.

SBT-12 is based in Coronado, CA and led by an O-5 Navy SEAL Commander. It has enlisted SWCC personnel who operate and maintain Mark V Special Operations Crafts (SOC) and Rigid Hull Inflatable Boats (RHIBs). SOC-Rs are a medium-range insertion and extraction platform for SEAL and special operations forces in low-to-medium threat e

nvironments, capable of speeds up to 48 knots with a range of more than 500 nautical miles, while RHIB is a is a high-speed, high-buoyancy, extreme-weather craft made of glass-reinforced synthetic with a range of approximately 200 nautical miles and a top speed of 45 knots. These craft normally operate in detachments of two boats with crews. SBT-12 supports NSW maritime and coastal Special Operations missions in the Pacific and Middle East. The command deploys detachments aboard amphibious ships, to Naval Special Warfare Unit ONE (NSWU-1) in Guam, and Naval Special Warfare Unit THREE (NSWU-3) in Bahrain.

SBT-20, based in Little Creek, VA supports NSW maritime and coastal operations in Europe, the Mediterranean, and South America. It deploys detachments aboard amphibious ships and to Naval Special Warfare Unit TWO (NSWU-2) in Stuttgart, Germany, and Naval Special Warfare Unit TEN (NSWU-10) in Rota, Spain. Like SBT-12, it also operates and maintains the Mark V and RHIB boats.

Among the three boat teams, SBT-22 is unique in that it is the only unit not based on an ocean. The capabilties of the 33-foot Special Operations Craft Riverene (SOC-R) boat are better suited for its home base at the John C. Stennis Space Center in Mississippi. These craft normally operate in detachments of two boats with crews. SBT-22 supports NSW riverine operations worldwide. The SOC-R is an aluminum-hulled boat capable of speeds up to 40 knots with a range of about 200 nautical miles.

SWCC Forces Train Teams, Then Leaders
While littoral warfare goes back 900 years and SWWC trace their origins to the “Brown Water” navy of the Vietnam War, special boat operators did not have their own distinct career path until 1 October 2006 when the Navy created the Enlisted Special Warfare Boat Operator (SB) rating. Prior SWCC operators were drawn from several source ratings, but with the amount of time needed to train before deployment, most sailors assigned only managed a couple of operational tours before returning back to the “big navy.”

“One of the greatest ways the closed loop improved our operators is, before we would have to take rating exams in whatever rate you were, so you would have to spend countless hours studying for a rate you don’t even work in. Now they only study SB stuff. You become a SWCC and that’s what you do your whole career,” said Henry.

The two-year deployment cycle is designed to be on a one-in-four rotation. The first six months of the rotation is for professional and personal development, followed by a second six-month unit-level training where the operators train up as boat crews. The third rotation is squadron integration training where they bring the SEAL Team, their boat troops, SDV troops, and other combat enablers together to form up a Naval Special Warfare Squadron. They train and work together for six months and then they deploy to support the global war on terror for the final six months in the cycle.

During that first deployment, they will have one of the basic tasks onboard the boat—most likely the chief engineer, lead navigator or perhaps a gunner.

When they return from that first deployment they will take that experience and will start training up to be a boat captain. The boat captain is the guy who drives the boat and is in overall command of that boat. Before his next deployment he will go through a rigorous qualification process with both practical exercises on the water and a very demanding board with a team of commanding officers and their command leadership before they qualify him as a boat captain. This represents their second deployment.

Their next qualification is patrol officer, where they are in charge of two or more boats at a time to execute a mission. They are given tactical and operational responsibility for mission success.

“These warriors are some of the very best-trained in the world, and they are now serving in multiple countries supporting every Geographic Combatant Commander. By working closely with other special operations forces, warriors from services like the Army’s Special Operations shooters, Special Forces and Rangers, we are able to bring a synergy, which is very powerful,” said Thompson.

“I believe that as we move forward, the key to continuing to root our terrorists, no matter where they hide, is to have strong, cohesive and multi-faceted units who can work with each other in any scenario to accomplish the mission.”

“On time. On target. Never quit!” is not a catchphrase, but a promise that…