0
SHARES
51
VIEWS
Share on FacebookShare on Twitter
Remington 870s have served police agencies for decades. With some tactical enhancements from Elite Tactical Advantage, this reliable scattergun is ready for any situation.

I’ve tested several shotguns in the past few months. Most of them have been semi-auto variants. As these guns improve in function and reliability, they are often my first choice. But there is something to be said about the simplicity of a pump-action shotgun, something my friend Ed Stock, who has been a police officer for over 35 years as well as a Gunsite instructor, combat soldier and Marine, reminded me recently. When I thought about it, I realized that several Remington 870s have been through my hands for well over 20 years. This spurred me to customize a Remington 870 for my own uses.
Some time ago, I had the chance to test the Elite Tactical Advantage Devastator, a modified version of the Remington 1100 shotgun. A number of conversations with Mark Mueller, the president of Elite Tactical Advantage (ETA), illustrated his impressive skill set when it came to engineering this gun. Mark is one of those idea guys who actually puts his ideas into play.

The Devastator was pretty impressive, as were the items attached to it. ETA also makes a number of accessories for pump-action shotguns, so they seemed like the perfect company for the task. I wanted to build a folding-stocked 870 with a dedicated top rail and forend. It would start as an 18.5-inch-barreled gun and later be turned into a gun with a 14-inch barrel. After a couple of discussions, Mark sent out a number of accessories to complete this task. It was just time to find a base gun and go to work. 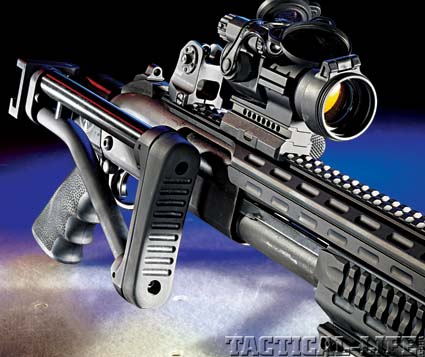 The G-Hinge allows the stock to fold to the right, making the 870 very easy to use and conceal for covert operations.

For a base shotgun, I was able to obtain an 18.5-inch-barreled Remington 870 Police Magnum 12 gauge in excellent condition with upgraded sights. I then submitted a Form 2 for its eventual remanufacture as a short-barreled shotgun. Mark sent me several accessories to work with. To facilitate the folding stock, I was given an adapter that bolts to the rear of the receiver. This included a pistol grip as well as the ETA G-Hinge to allow for folding. There was also an adapter to attach an AR buffer tube. 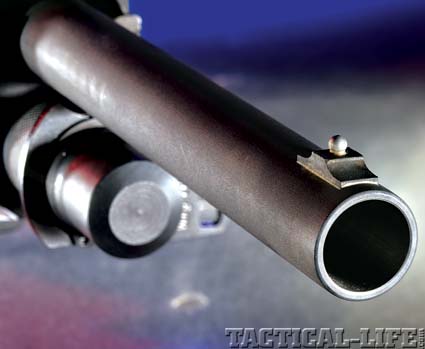 The 870 was set up so it could switch between an 18.5-inch-long barrel with a bead sight (shown) or a shorter model when needed.