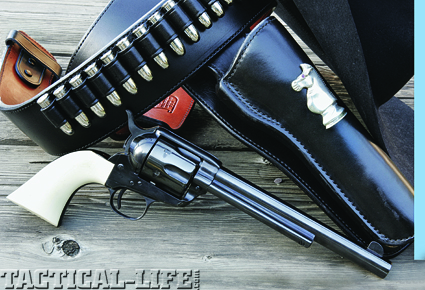 There’s nothing like a fine casehardened finish, the kind you find on Period First Generation 1873 Single Action Army Colts or on the guns finished and refinished by Doug Turnbull. I have discovered something by examining the photographs of some of the guns used by my favorite old-time western stars. Those guns weren’t blued and casehardened but finished completely blue on the barrel, cylinder and frame.

I’m not going to get into why the Western was so popular. If you’re reading this magazine you know why, you know the nerve that it touched. But this popularity came at a cost; this outright explosion of shows, every one of the three networks having multiple western programs from Wagon Train to Rawhide to Pony Express and The Lawman and Wyatt Earp—and I could go on for the length of this article. But I was talking about full-blue-finished SAAs (Single Action Army) and the proliferation of TV Westerns was one of the major factors. Hollywood TV and movie studios found themselves needing guns for multiple productions.

“They needed single-actions,” recounted Peter Sherayko, founder of Caravan West Productions, one of the major suppliers of Old West guns, holsters, saddles and costumes to movies such as Tombstone and TV projects such as Buffalo Girls and Wild West Tech. “In the 1940s it was standard operating procedure for movie studios and the big rental houses to refinish SAAs that got worn by simply bluing the entire gun. I have several guns in my collection that are stamped “Fox Studios” under the barrel and they’re all blue guns.” Refinishing worn guns full blue wasn’t the only reason there were so many on TV. Sherayko continued, “Like I said, the ‘50s TV series needed lots of SAs. Problem was, there weren’t a lot of SAs.”

Colt had ceased production of the SAA in 1940 and had not yet geared up a second-generation version of the pistols. In fact, it was the great demand created by the consumers watching TV westerns that made Colt bring the fine, old gun into production again. Since the process of fine, case color hardening wasn’t easy or cheap, manufacturers like Great Western and J.P. Sauer of Germany supplied full-blue guns. “If you look at some of the stills of James Arness as Matt Dillon in Gunsmoke,” Sherayko revealed, “You can see his single-action is a J.P. Sauer because the cocked gun reveals a missing firing pin. The Sauers had transfer bar safeties.”

The makers of these cathode ray tube westerns didn’t care what color their SAs were. In fact, many preferred the businesslike look of the full-blue gun. When the Have Gun Will Travel TV series reappeared recently on DVD, it became clear that the show’s armorers liked the black look so much that they had even painted Paladin’s SAA’s wood grips black. 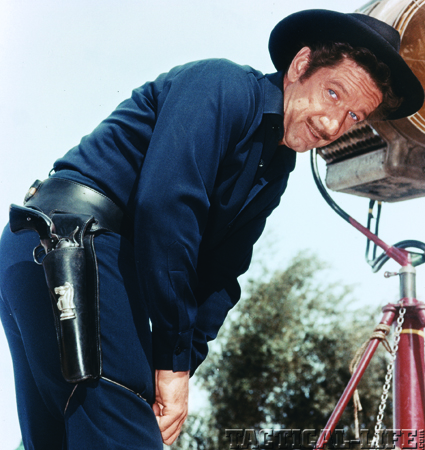 As a Have Gun Will Travel fanatic as a kid, I’ve always had a soft spot in my heart for that clean, all-black finished SA. So you can imagine my elation when I discovered that the EMF Company, who had resurrected the Great Western with their fine Great Western II SA revolver, will custom finish the Great Western II in full blue. Along with a case colored frame version by Pieta and shiny and matte-finished stainless guns, EMF could make my dream come true.

Since I had just acquired one of Omar Pineda’s excellent Paladin rigs, made to perfectly match the pattern of the holster made by his father Alfonso Pineda for Richard Boone, I needed a 7.5-inch full-blue SA to put in it. EMF was quick to supply me with an all-black, long barreled Great Western II, and the full-blue Cavalry-length SAA matched the Alfonso rig perfectly. 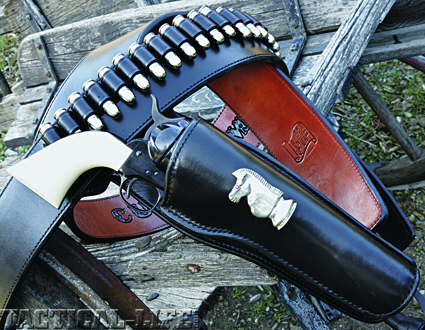 EMF’s Great Western II in full blue with 7.5” barrel with Alfonso’s Gunleather Paladin rig is a true thing of beauty.

By the way, the Paladin rig is a true thing of beauty. That’s a real ruby in the chess piece’s eye, not a bit of plastic like in some other holsters. Alfonso’s Gunleather is devoted to recreating the rigs of our western TV and movie heroes. That’s not just Omar’s job, it’s his legacy.

Omar is the son of Alfonso Pineda who, along with holster expert and fast gun coach to the stars Arvo Ojala, created the genre of holster we have come to know as the Hollywood Fast Draw Rig. This was the belt that was slung around the waist of just about every TV Western star of the ‘50s, ‘60s and ‘70s. Striking out on his own, Alfonso founded his company, Alfonso’s Of Hollywood, supplying holsters and leather craft to Hollywood luminaries and regular gun-toting folks alike.

Omar got his start in his father’s shop as an 8-year-old cutting, dying and preparing leather. When Alfonso passed away several years ago, Omar took over the outfit. He continued to use the original patterns from the early TV westerns and expanded the line considerably. He relocated to the gun-friendlier city of Burbank, California, and renamed Alfonso’s Gunleather, Omar and his crew now make gun belts and holsters for movies, SASS (Single Action Shooting Society) competitors and police officers, as well as re-making the holsters his father once made for the biggest stars of television. If you want the real deal, a holster for competition or a TV or movie accurate rig like your hero used to use, Alfonso’s is the place to turn.

The full-blue Great Western II came out of the box with a fine, smooth trigger that compared well with factory Colts that had been redone by some of the custom smiths. Feeling lighter than my 7.5-inch Colt, it drew smoothly from my leather and pushing it out towards the target, it hung at the end of my outstretched arm and demanded to be shot one-handed. Happily, the gun shot to point-of-aim without fiddling with the fixed sights.
I had my blue gun, and the fine finishing and workmanship of the EMF made it right at home next to my nickel and casehardened Colts, Rugers and Cimarrons. The gun came with smooth, fake ivory grips and I just haven’t had the heart to go all the way and paint them black for the full Paladin treatment yet, but I’ll get around to it.
I thought my full-blue fever had been satisfied and then they just had to do it. Walking through the EMF booth at the SHOT Show, I stopped in my tracks as I spied one of their display guns: a full-blue, 4.75-inch barreled, .45 Great Western II SA revolver with fake stag grips, and fully hand engraved! Now, as much as I like the looks of a blue frame, there’s something about an engraved blue frame that really sets my heart on fire; the engraving, which can sometimes get lost in the busy swirl of case colors, leaps out of a blued frame. 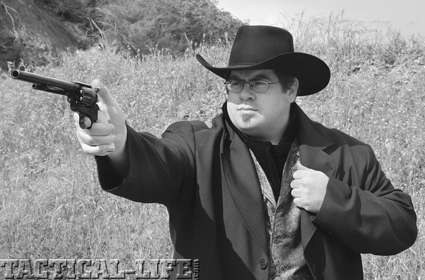 Of course, I bought that one too, right out of the EMF booth without taking a second look at it. After the SHOT Show, it got to me with a few scuffs and minor scrapes from being handled by about a gazillion people at the SHOT Show, but I don’t care. It’s so beautiful; I just may have to shoot it. Just maybe.

There’s nothing like a fine casehardened finish, the kind you find on Period First…