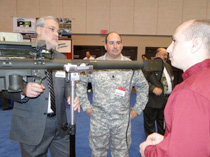 Balance is the goal for the Department of Defense as its officials work to develop a strategy relevant to fighting two wars and to providing for future military needs, said the second highest ranking military officer in the U.S. armed forces.

“We need to be able to balance the realities of the war we are fighting and the idea that we have to put together some sort of crystal ball and figure out where we are going,” said Marine Corps Gen. James Cartwright, the vice chairman of the Joint Chiefs of Staff.

“Where are we going to adjust our balance? We have two adversaries, two high-end fights. The challenge this time around is are we ready for two fights that have worn on and we are likely to be in for five to 10 more years? A lot of this is about … is the strategy relevant? Are the tools we are procuring relevant? Is the strategy adaptable?”

Cartwright’s comments were made during his presentation at the 12th annual Space and Missile Defense Conference on Aug. 19.

Strategic objectives and potential military threats are being discussed ongoing as part of the Department of Defense’s Quadrennial Defense Review. That study now reflects lessons learned during nearly eight years of war.

“If there is anything we’ve learned while at war it should be that the enemy has a vote in the war and where it is going,” Cartwright said. “The other thing we should have learned is that affordability is a big issue.

“At some point, this level of funding is going to have to change. The global financial environment and the pressures felt internally afford how much we have. Somehow we have to balance funding concerns with high-end conflicts and the conflicts we are more likely to be in in the future.”

The general said the U.S. must have an enduring policy on high-end offensive and defensive capabilities and a balance between “exquisite and good enough” when deciding whether to invest in one or two high-end weapons or a multiple of more affordable weapons.

Policy must reflect the changing world environment, especially when it comes to nuclear weapons.

“We are in a world where conflict has proliferated all over,” Cartwright said. “With our nuclear posture review, the reality is the deterrent strategy of the ’50s and its relevance in today’s world is very much in question.”

Singling out North Korea, Iran, other rogue nations and the emergence of non-nation state actors such as terrorists, Cartwright asked “How relevant is a nuclear weapon as a deterrent to those kinds of challenges? It’s time to move away from one-size-fits-all deterrents. We provide an umbrella of safety for our allies. But how relevant is that deterrence with an emerging Iran or North Korea? A nuclear deterrence certainly worked for the past 50 years. But it won’t for the next 50 years.”

In terms of ballistic missile defense, Cartwright said the emergence of intercontinental ballistic missiles hasn’t happened as quickly as expected. He added that the nation’s ground-based intercept capability against rogue threats has been successful “thanks to the people in this room,” indicating the government-industry partnerships that are part of Team Redstone.

He said the nation must protect the homeland, deployed forces, and friends and allies in “credible ways that will, in fact, shape the minds of adversaries. We need to end the proliferation of weapons of mass destruction and integrate multiple states that bond together as neighbors to create a regional extended deterrent construct.”

Cartwright is concerned that the nation’s ballistic missiles at the short, medium and intercontinental level and that are deployable within minutes are all equipped with nuclear warheads.

“Is a nuclear weapon prudent for the nation? There is the regret factor. Is it significant enough? We need an offensive side. We need something that can hold at risk these ballistic missiles, something that is going to deter nations who we believe have ballistic missiles and that can export these capabilities to influence their neighbors,” he said.

In terms of the use of space in missile defense, Cartwright said military space programs must be relevant, adaptable and affordable.

Space is contested, busy and competitive. It no longer belongs to the U.S. and should no longer be considered a national secret.

“It’s really questionable some of the assumptions we’ve operated under,” Cartwright said. “It’s time for a new idea. We don’t have all the intellectual capital of space. We need to partner or completely divest to the commercial sector.”

“What’s the right investment posture as we move forward? Regional stability for our allies and friends is as important as our national defense … Our adversaries need to know that no matter what they do, the outcome of the fight is going to be the same,” he said.