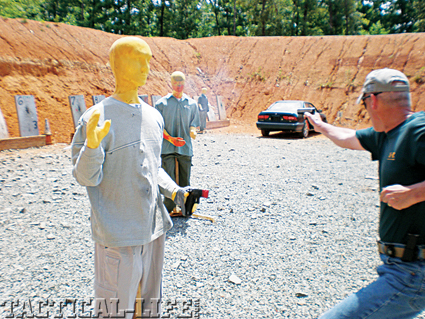 Mixing up the type of target used can be useful. The steel plate gives instant feedback while the humanoid target offers a more realistic target beyond the sights.

Anyone who has ever been trained in the art of combative firearms has shot multiple target drills. The shooter/student usually stands 7 yards from three evenly spaced targets and a buzzer or whistle signals the beginning of the drill, which requires the shooter to fire a set number of shots on each target, either from a ready position or the holster. There might be a reload in the middle…or maybe not. The shooter usually stands still with no use-of-cover required and a very liberal time frame is placed on the drill—six shots in 20 seconds, something like that. For law-enforcement agencies, the time frame must remain liberal as the intent is not to challenge the shooter, but to get them “qualified” in some type of multiple-target drill so they can go back on the street. After all, the goal is not to prepare the officer for what they’ll likely face on the street if they’re involved in a gunfight with multiple adversaries (I could use the more politically correct word “confrontation,” but gunfight is the reality); The true goal is to meet some agency or state qualification mandate. After all, qualification is the same as preparation, correct?

Some would have you think so, but nothing could be further from the truth. Let’s face facts: All defensive firearms training is artificial! It’s a method for preparing police officers or citizen-students for armed conflict through skill-building, but there’s no way the stress and pandemonium of a life-and-death fight can be incorporated into any training drill or scenario, including Airsoft or SIMUNITION. Why? Because the expectation or possibility of injury or death has been all but eliminated. As trainers, we do the best we can, but there’s no way we can capture the reality of every possible threat our students may face. That said, some drills are better than others as it relates to conflict preparation.

Practicing basic room clearing techniques is essential when preparing for an active shooter.

The drill described earlier is a perfect example. It may be great for competition, but poor for fight preparation. I know I’ll get called on the carpet, so before I go any further, let me say that I like the classic El Presidente drill in which a shooter must pivot and face three targets, draw from the holster and fire two shots on each of the three, reload and either shoot two more or a single head shot on each. The drill has varied over the years, but follows the same basic format. I like the El Presidente not because it’s a multiple-target drill, but because it requires the shooter to perform a variety of necessary fundamental skills all in one drill. For this purpose, it’s brilliant, but do not mistake what it really is. Jeff Cooper, the originator on the El Prez’, never thought of it as a multiple-target engagement drill. In a personal conversation that I had with Col. Cooper, he told me that while the drill was created based on a real incident, he saw it as a test of a shooter’s skill. “If I were to hire a bodyguard to protect me on a trip to a foreign country” the good Colonel told me, “I would have him shoot the ‘El Presidente’ to gauge how well he can handle his firearm.” When used in this fashion, the drill makes sense, but it is not a drill for preparing to fight multiple adversaries. 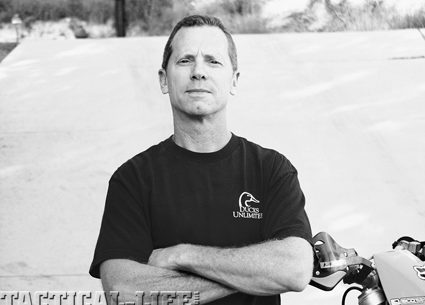 Mixing up the type of target used can be useful. The steel plate gives…