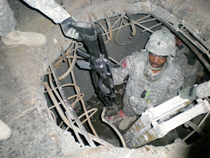 BAGHDAD, April 20, 2009 – When terrorists who discovered tunnels underneath a heavily traveled road in western Baghdad used an improvised explosive device to blow a huge hole in the street to disrupt traffic, 225th Engineer Brigade engineers from Headquarters and Support Company, 46th Engineer Combat Battalion, were called in to repair the road and seal access to the underground tunnels.

“The crater was pretty dangerous, and we ended up repairing two holes in that road,” Army Staff Sgt. Xavier Bowie, mission noncommissioned officer in charge, said. “There’s an Iraqi army checkpoint nearby, and the [Iraqi soldiers] said it caused a lot of traffic when people would stop to avoid the holes. It was even worse when the drivers didn’t see the holes and would just drive into them and damage their cars.”

Moving by night, the engineer teams arrived at the damaged overpass. Once the explosives teams of the 1st Infantry Division’s 731st Explosive Ordnance Detachment, 2nd Brigade, cleared the area of any possible threats, the engineers descended into the darkness to cut off terrorist access to the tunnels.

Army Spc. Stephen Green and Army Spc. Eduardo Bonilla welded steel plates over all the points that led into the tunnel while Equipment Platoon soldiers prepared the holes for repair. The soldiers repaired the craters by chipping away the damaged asphalt and cleaning up the site.

After three hours in the tunnels and an additional two hours fixing the holes, Army Spc. Christopher Sallas used a forklift to place a steel plate into the large crater in the overpass. Next, the crater team, led by Army Staff Sgt. Wesley Roach, placed a quick-drying asphalt alternative over the plate. After smoothing out the mixture, the team placed road cones around the asphalt to allow it to dry without interruption by traffic.

A follow-up visit to the site a few days later revealed a situation that was not all that surprising, given what brought them out there in the first place: the asphalt and steel plate had been removed. The engineers then returned to the site with another solution.

“An attempt was made to reopen access to the tunnel,” Army Command Sgt. Maj. Francis Thibodeau, the battalion’s command sergeant major, said. “This is a busy road, and someone was going to get hurt if we didn’t put a stop to this. So we sent the welders back in to make sure this doesn’t happen again.”

This time, the engineers took measures one step further and placed several heavy plates of over-sized steel deep into the hole. The welders then sealed the plates into place to end access to the tunnels once and for all.

With repairs made to the holes, several massive steel plates welded firmly in place and all the tunnels sealed, the engineers not only defeated terrorists, but also improved the lives of the Iraqi people living in the area.

“This is great that this hole is fixed,” Hasan, an Iraqi soldier who helped to guard the site, said. “People have so many problems on this road. Sewage trucks can’t get by, [and] families driving get stuck if they don’t see it. Thank you!”

BAGHDAD, April 20, 2009 – When terrorists who discovered tunnels underneath a heavily traveled…