Some people associate engineers with route clearance here, but that’s only a small portion of the much larger combat engineer skill set these soldiers are learning to apply in new ways to support the mission.

Based at Contingency Operating Site Hunter in southern Maysan province and attached to 2nd Squadron, 13th Cavalry Regiment, Task Force Saber, the engineers clear about 400 miles of rural highway each week to allow free and safe movement of U.S. forces and Iraqi civilians. Recently, the engineers began training soldier trainees of 3rd Battalion, 41st Iraqi Army Brigade, in the use of mine detectors.

Mine detectors not only finding mines or live munitions, but also discover hidden caches of weapons and weapon components in the marshy terrain of Maysan province.

“Finding [weapons] is a priority not only for us, but also for our Iraqi army partners,” said Army Maj. Evan Wollen, Task Force Saber operations officer. “Every successful interdiction means less lethal aid ending up in the hands of anti-Iraq forces.”

The training motivated the Iraqis, Ortega-Rojas said. “We are eager to teach them, because they are ready to handle their own security.”

Army Sgt. Jacob Irish, a combat engineer who supervised the training, agreed with that assessment.

“[The Iraqi trainees] seemed eager to learn,” he said. “They seemed to know exactly what they were going to do with [the mine detector] and how they wanted to use it.”

The Iraqi soldiers then moved to lanes training to learn how various objects sound when detected by the mine detector.

All students had an opportunity to operate the mine detector, probe findings and recover buried objects until the soldiers felt proficient in all tasks assigned. 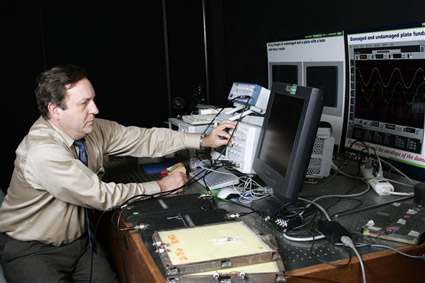