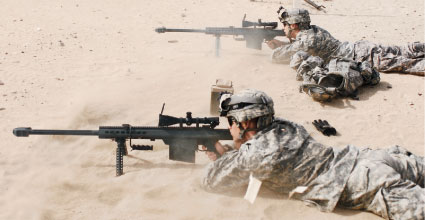 The Barrett Model 82, named for the year it was designed, and its successive Model 82A1 set the standard for these specialty rifles, with more than 5,000 in service with the US Armed Forces. Today, the .50 BMG product line includes the Model 95, a bolt-action .50 caliber repeater in bullpup configuration with a 10-round magazine; and the Model 99, a single shot, bolt-action bullpup rifle, known as the “Big Shot,” in either .50 or .415 Barrett calibers.

Because of its ubiquity, the big .50 caliber cartridge itself may lead to new capability developments far beyond long-range sharpshooting. The size and power of the cartridge, combined with other emergent technologies, could enable rifles to serve as highly portable launch platforms for a wide variety of encapsulated devices ranging from sensors and transmitters to mini-illuminators.

.50 Cruise Missile
Improbable as it sounds, such capabilities are at least feasible, and research already is under way on a new round with enhanced lethality. In early 2008, DARPA (Defense Advanced Research Projects Agency) launched a request for proposal on a new program called EXACTO (Extreme Accuracy Tasked Ordnance). The program’s goal is the creation of an actively controlled bullet, a projectile able to change its direction, compensating for factors such as wind and air density and moving targets. In effect, the new ordnance would be a .50 caliber cruise missile with a tiny guidance system. DARPA believes a smart bullet would protect snipers by preventing spotters from tracing a shot’s origin and reduce training requirements by facilitating the accuracy at extremely long ranges. All these issues are important because, not surprisingly, the requirement for long-range marksmanship is growing. The Defense Department notes that sniping events have increased from about 250 to more than 800 a year.

The Barrett Model 82, named for the year it was designed, and its successive…