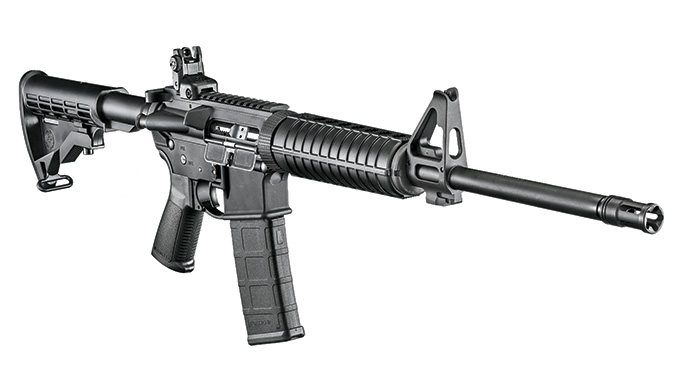 1 of 3
Entry-Level AR: Ruger’s All-American AR-556 Rifle
Ruger ships the durable AR-556 with an adjustable front sight, a Quick Deploy rear sight, a hammer-forged barrel, a collapsible stock and much more for only $749. 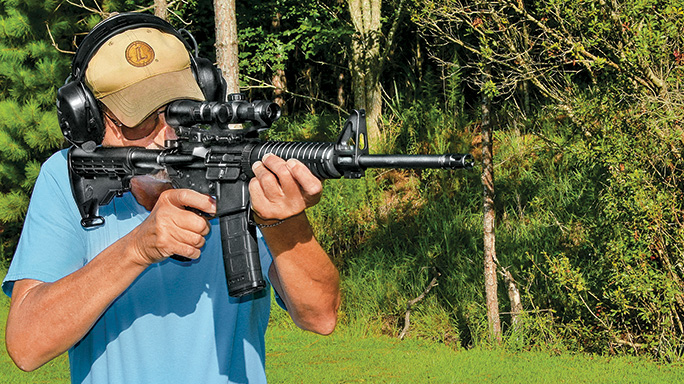 2 of 3
Entry-Level AR: Ruger’s All-American AR-556 Rifle
At the range, the author found that the Ruger AR-556 was easy to shoot and performed well in timed tactical drills. It also ran flawlessly with several loads. 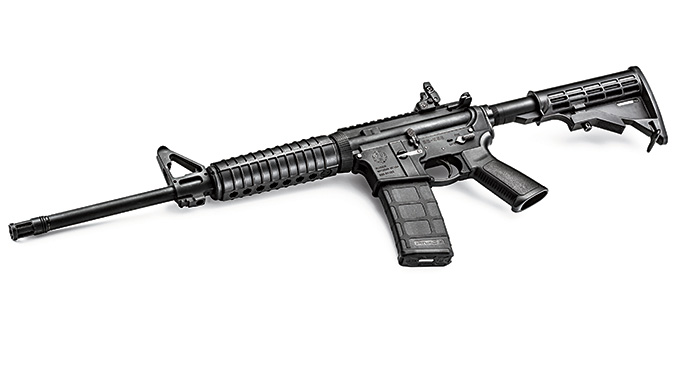 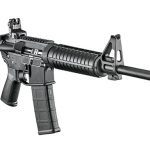 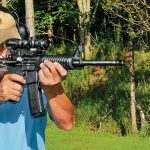 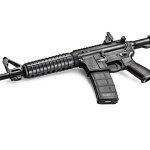 The Ruger AR-556 is an accurate and reliable AR that doesn’t cost a fortune, even though it’s constructed from the same lightweight, durable materials as more expensive rifles. The only significant difference between the AR-556 and high-end models is that Ruger leaves it up to the prospective owners to decide if they want to add hundreds of dollars of high-end modifications like handguards with rails, match-grade barrels and competition triggers. But just as it is, the AR-556 is more than adequate for competition, hunting and personal defense.

More Than A Bargain

Even though the AR-556 is an entry-level gun, it still has some really nice features. For example, the rifle’s carbine-length gas block has a bayonet mount and a QD socket for mounting slings and accessories. The top of the upper receiver has a Picatinny rail for mounting sights and optics.

This rifle also comes with adjustable iron sights that are the proper height for co-witnessing with a number of optics. The rear sight is Ruger’s Rapid Deploy sight, which can be folded to clear the ocular lens housing of a telescopic sight. In addition, the gun’s handguard is made of glass-filled nylon for comfort and heat protection, and the polymer, six-position-collapsible, M4-style buttstock is installed on a mil-spec buffer tube. And don’t forget the comfortable, ergonomic pistol grip that is designed for the best trigger reach and a triggerguard that’s enlarged for use with gloves.

The bolt carrier and barrel also have upgrades that improve reliability and accuracy. The inside of the bolt carrier and the carrier key are chrome-plated for resistance to corrosion from hot gases, and the key screws are staked to ensure they won’t come loose during heavy use. The 16.1-inch, medium-contour barrel is cold-hammer forged for accuracy and easy cleaning. It has a 1-in-8-inch twist rate to stabilize projectiles weighing between 35 and 77 grains. The barrel has M4 feed ramps for reliable feeding, and the chamber is sized for the 5.56mm NATO cartridge so that the AR-556 will handle both 5.56mm and .223 Remington ammunition. The muzzle also has 1/2×28 threading. The barrel comes with a Ruger flash suppressor, but the threading allows for the attachment of suppressors and other muzzle devices the owner may want to add.

The AR-556 looked well-made when I picked it up at the Florida Gun Exchange, and a close examination at the workbench indicated there were no scratches, tool marks, poorly conformed parts or sharp edges anywhere on the external or internal surfaces. The upper and lower fit together snugly, and the safety moved smoothly and stayed put when placed in the “safe” and “fire” positions. On the other hand, the rifle’s action was a bit tight, and the two-stage trigger had a pull weight of 7 pounds, but neither affected the functioning of the rifle.

Aftermarket triggers for ARs are very popular, and Ruger just introduced one called the Elite 452. It costs a very reasonable $160, considering that triggers from manufacturers can go as high as $350. The Elite 452 is advertised as having a 4.5-pound pull, and it uses a lightweight hammer combined with a full-strength hammer spring to reduce the lock time without reducing the rifle’s ability to reliably ignite a broad variety of primers. The trigger comes packaged with a safety switch and an ergonomic polymer pistol grip that has Ruger’s optimized trigger reach. This trigger is not just for Ruger guns—it can be installed on just about any AR, and I was able to install the one Ruger sent me for this article in about 30 minutes. After installation, the trigger pull consistently measured 3.75 pounds. The pull was smooth and the sear broke very crisply. Given its reasonable price and good performance, the Elite 452 trigger is definitely worth considering.

For optics, I mounted a Leupold 1.5-4x20mm Mark AR MOD 1 scope on the rifle’s top rail in a Leupold one-piece mount. The scope has a duplex reticle, and the crosshair’s wide sections do a good job of framing the target at CQB distances when the scope is set at low power. The fine sections of the reticle allow accurate shot placement out to at least 300 meters when the scope is at 4X. This gives the shooter the flexibility to handle the vast majority of tasks that the AR-556 may be called on to perform. I also mounted an old Aimpoint CompM2 sight on the rifle to test for co-witnessing of the iron sights. When looking through the aperture of the rear sight, the Aimpoint’s 4-MOA red dot appeared right on top of the front sight post.

I tested the AR-556 with a variety of .223 Remington loads and one 5.56mm NATO load. Ammunition included Federal’s 62-grain American Eagle FMJs, Fort Scott’s 55-grain solid-copper rounds, HPR’s 62-grain Black Ops ammo, Liberty Ammo’s 55-grain Sliverado fragmenting copper HPs and Winchester’s 55-grain, polymer-tip Varmint-X ammo. In addition, I used Black Hills’ 69-grain, .223 Remington Match load for a 300-meter accuracy test, Fiocchi’s .223 Remington FMJs for timed five-shot drills at 7 and 15 yards, and Black Hills’ 77-grain 5.56mm NATO ammo for timed three-shot drills at 15 yards. Some of these loads are fairly new and have advanced bullet designs. The Fort Scott load’s pointed solid-copper bullet is designed to tumble and penetrate deeply. The HPR Black Ops hollow point has a compressed metal core that fragments and limits penetration. The Liberty Arms Silverado peels back as it penetrates and separates into a base disk that penetrates about 12 inches, and six or seven petals radiate outward from the main wound channel. Finally, the polymer tip on the Varmint X pushes rearward upon hitting the target and causes rapid expansion and core fragmentation. These specialized bullets allow a shooter to tailor the penetration of his or her ammunition to the size of game being hunted and the risk of collateral damage.

Accuracy tests were conducted at 100 yards, 200 yards and 300 meters. There were light to moderate gusting crosswinds on the day of the 100- and 200-yard tests. Bullets in .223 caliber generally have low ballistic coefficients and even a light crosswind can deflect them. Because of the wind, the 100-yard average groups were around 2 to 2.6 inches, with many individual groups showing lateral wind

dispersion. Groups shot with the Winchester Varmint X load at 200 yards averaged 4.54 inches, again showing the effects of crosswind. Fortunately, there was very little wind on the day I shot a five-round group with Black Hills’ 69-grain match load at 300 meters. This group measured 3.21 inches. This is more representative of what the rifle can do under good conditions.

As expected, bullet velocities from the AR-556’s 16.1-inch barrel were about 200 to 300 fps lower than factory-published ballistics. The fastest load was Liberty Arms’ 55-grain Silverado HPs, which crossed the Competition Electronics chronograph at 2,929 fps. The muzzle energy was 1,048 foot-pounds. The slowest load was the Fort Scott copper solid. At 2,652 fps, it produced 859 foot-pounds of muzzle energy, which is roughly equivalent to the energy of a .44 Magnum.

I ran timed five-shot drills twice at 7 and 15 yards. The drills involved engaging three targets from low ready with the first target getting a double tap to the chest, the second a single shot to the head and the third getting one to the chest and one to the head. String times were measured with a Competition Electronics timer. At 7 yards, the average time for two runs was 8.31 seconds and the score was 70 out of a possible 100 points. At 15 yards, the average time was 10.25 seconds and the score was 80/100. I ran a separate three-shot, 15-yard drill three times. It had two targets and required one chest shot and one headshot on the first target and the same on the next target. The average time was 5.25 seconds and the score was 65/90. The rifle ran flawlessly, and the Elite 452 trigger allowed for fast, controlled shots to high-value areas.

The AR-556 is a good example of the kind of value that can be built into modern firearms by using space-age materials and modern computer-based design and manufacturing techniques. For $749, the  buyer gets a rifle that is well-built, accurate, durable and totally reliable with a broad variety of ammunition. It will accept a wide range of optics and can be used as a platform for building a custom rifle if the user is so inclined. In short, it’s a very good rifle for a very good price. 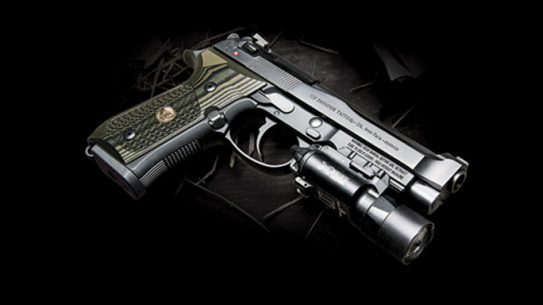