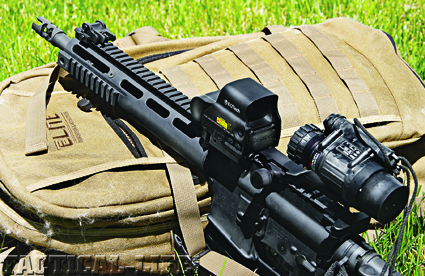 The EXPS3-2 takes up little space on the rails, easily accommodating additional accessories such as NVDs or the G23.FTS magnifier.

When asked which sight to use on an AR15 platform, the EOTech is generally a first choice. It just works so well on the platform, and is truly well suited for police work. There is certainly nothing wrong with a simple red dot system, but the larger reticle with various aiming points simply lends itself to what police officers do. It allows for many reference points at varying distances to compensate for sight offset, without the need to necessarily look for a dot. As a rather staunch adherent to the concept of focusing on the threat and not the sight, this system works really well. When precision is paramount, the center dot can be used. At CQB distances, you need simply put the threat in the correct portion of the reticle and go to work. It has always proven to be very fast, accurate and precise when needed.

The mounting system right out of the box co-witnesses most BUIS systems designed for the AR Platform, thus removing the need to buy another mount. It zeroes easily with no special tools and, depending on the model, accommodates night vision equipment as well. In the case of the XPS, mounting that 123 battery transversely really cuts down on the size. For years my preference was the N-battery model for just that reason; it just makes it so compact.

While making the rounds at a recent NRA meeting, the EOTech booth “wandered into my sights,” and a stop was in order. Red dot sights have a similar issue like new computers — just after you buy the latest model, an even newer model comes out. Irritating as it may seem, it is just a sign of the market — there are so many advances these days and they occur so quickly. That being the case, it was time to get my hands on the new EXPS3-2 sight for some testing. 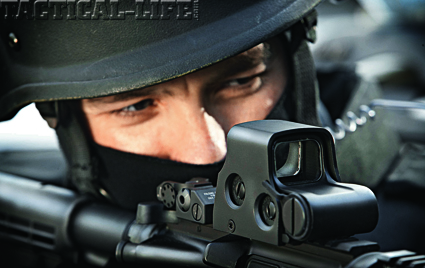 The EXPS3 system is available in two configurations, the only real difference being the reticle. The EXPS3-0 uses the standard 65 MOA reticle with a single 1 MOA aiming dot. The EXPS3-2 uses a 65 MOA reticle but contains two, 1 MOA aiming dots (the sight provided has these two aiming dots). There are some other changes to this system as well. The battery cap and latch are gone, replaced by a simple O-ring and cap tethered to the sight. It also utilizes a quick release system that is shorter, more compact, and goes on and off very easily. Lastly, buttons are mounted to the side in order to accommodate the use of night vision or the three-power magnifier.

The first thing observed was the clarity of the reticle. Not sure if they changed anything, but this one just seemed to be more “solid” to me. There was a bit less of the pixelation that is sometimes seen. It was mounted to my Para USA TTR for the bulk of the live fire testing; but was fitted to several other uppers.

The mount is really easy to get on and off. A simple push of the button in the front of the mount and it comes loose. It fit with no adjustment on all of my upper receivers and the Para USA TTR.

The next thing was to mount it in front of a PVS-14 Night Vision system. Without having a magnifier in my inventory, none was tested, but having used several with other EOTechs — there was little doubt it would work. What I really wanted to test was the two dots. 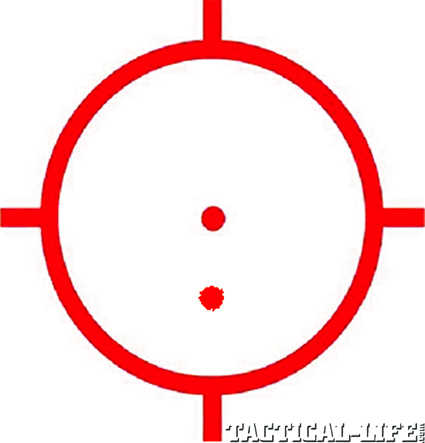 This sight is easy to zero and the reticle is clear and easy to pick up with the two-dot system providing distinct points of reference.

As expected, the zeroing process went smoothly with little adjustment. It was on paper out of the box and up and running shortly. The center dot was zeroed at 25 yards. Many may use a longer zero, but the world in which I have worked for so many years exists primarily at 25 yards and in. It facilitates precision on approach with most operations, and that is what is necessary. For longer ranges it simply requires taking the time to be certain where to hold, but for the most part something 25 yards and in is far more likely than 100 yards in the law enforcement world.

The next step was to try out that second dot. Having used a single dot for so long, it was going to be interesting to see if it was preferred. For me and on this rifle, it worked perfectly. At closer distances that second dot accounted for the sight offset and holdover. As to preference, that is still up in the air for me. For those who do zero the rifle at 100 yards, this second dot could be very handy. It could be used not only for sight offset compensation at 25 yards and in, but holdover outside 100 yards — either way it adds versatility for sure. Lastly, the PVS-14 was mounted and some work was done at night. It worked perfectly and the buttons on the side are very useful. You can change settings without obstructing your view.

Bottom Line
Personally, I think the changes overall are worth every penny. Although the two-dot system is subject to personal preference, the sight is undeniably excellent.Check out the new EXPS and gain the fighting edge by visiting eotech-inc.com or calling 734-741-8868. 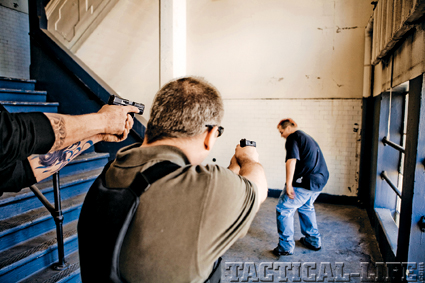 The EXPS3-2 takes up little space on the rails, easily accommodating additional accessories such…