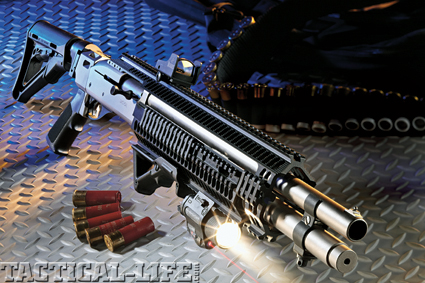 The ETA Devastator is truly revolutionary for the 11-87 design, incorporating a folding stock and radical rail system to this popular platform. Seen here equipped with a Burris FastFire II Red Dot and Insight Tech-Gear M6X Laser/Light.

Having long been a fan of the shotgun platform, I’ve taken the opportunity to test a variety of scatterguns throughout my career. Starting life as a dyed-in-the-wool pump shotgun guy, the move to semi-automatics was made in earnest about 10 years ago. As they became truly reliable, all the downsides just seemed to disappear. Clearly there are some operators out there that are as “fast as the auto” with their pump gun, but not me.

The ability to have it cycle as fast as the trigger is pressed can be advantageous on an entry or at close range. With the correct ammunition they also seem to add some credence to the pseudo-science of the “one shot stops.” All of the discussions as to the terminal ballistic performance of rifles, pistols and submachineguns just make most shotgun guys chuckle. The number of cases where the suspect was double-tapped with buckshot at close range and failed to stop are just about non-existent. With the advances in ammunition it only gets better. Buckshot patterns that are under 5 inches at 25 yards are common, so the need to change ammunition is reasonably limited. With all the rifles that go through these hands, the semi-auto 12 gauge is still my go-to-gun. A short-barreled semi-auto with a small red dot, pistol grip, and side saddle is within reach to this day. 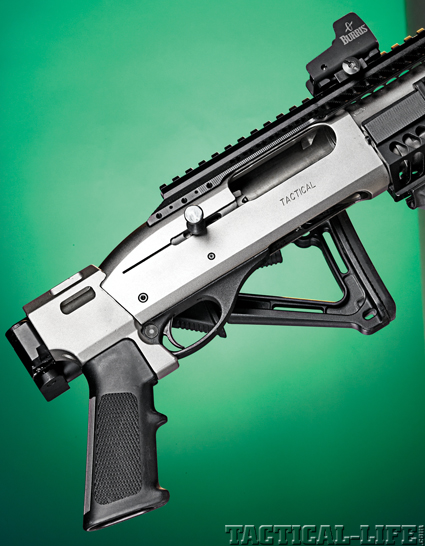 The folding stock allows operators to bring serious firepower for covert assignments as well as fighting from a patrol vehicle.

One of the first short barreled semi-auto shotguns deployed for entry on our LE team was an 11-87 made by Scattergun Technologies. It was one of the last ones made prior to the sale of the company to Wilson Combat. Once it was tuned up to use the ammunition we used most, it ran fine, as long as we used that ammunition. Running low-brass practice ammunition could be a bit of a problem as compared to the duty ammunition. Eventually, we benched them and followed the popular move to submachineguns.

The ETA Devastator is truly revolutionary for the 11-87 design, incorporating a folding stock…