Primary Marking Systems Inc., a leading provider of product-tracking equipment for commercial clients, has developed software that enables law enforcement to electronically track the chain of custody for evidence and chronological documentation of a paper trail to show the seizure, custody, control, transfer, analysis, and disposition of evidence. This high-tech tracking system, aptly named Evidence Tracking With Information Solution Technologies (eTWIST®), is a barcode-based software which allows police officers to record and enter evidence data from a crime scene while still in the field and/or on the move.

The patented, easy to use eTWIST® technology utilizes Windows Mobile and/or HTLM-based software which can be integrated with a Motorola mobile handheld computing device. Using this system, law enforcement officers can quickly record evidence at the crime scene and generate RFID or bar code labels to identify and code the evidence including the time/date, compass heading, temperature and Geo-location of where the evidence was collected. Everything is stored on the handheld device, and the data can be imported into a computer or database in a matter of seconds.

“Using our eTWIST® technology system, law enforcement officers can collect all of the information about a case, such as: names of the suspects and victims; evidence and remarks; witness testimony; photographs; as well as producing and scanning the associated bar codes all while at the crime scene,” says PJ McIntyre, eTWIST® Product Manager for Primary Marking Systems, Inc. “This technology makes the work of any law enforcement, military or private enterprise that tracks chain of custody easier, more immediate and with greatly increased detail and accuracy.”

The eTWIST® technology also allows a law enforcement officer to identify multiple victims, suspects, witnesses, evidence and remarks with a photo and GPS location stamp. The information, including the case number, time, date and the officer’s department service number, is uploaded to a database. The barbell-shaped bar code labels can be affixed to the piece of evidence or the evidence container. The labels and text are extremely durable, and completely weather proof. They can also be pre-printed with a precinct or crime unit name, so that the evidence source can be seen at a glance.

“Using our technology, a weapon can be photographed by a person from law enforcement with a Motorola mobile computing device or cell phone, and the time, date, GPS position and the detective’s I.D. number are recorded electronically,” adds McIntyre. “That information is associated with a bar code, which can be attached to an evidence container, thereby reducing the possibility of human error and increasing the chances of prosecution.” 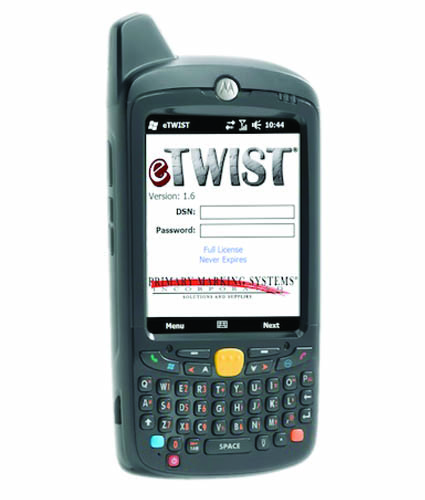 Estimates indicate Law enforcement agencies using eTWIST® can save 50 man-hours each week, and many police departments throughout the U.S. have been utilizing this high-tech tracking system with outstanding results. The Maplewood and Creve Coeur Police Departments, serving suburbs of St. Louis, as well as a law enforcement agency in Cold Spring, Kentucky are just a few examples. eTWIST® is also part of the teaching curriculum of the DHS sponsored NCBRT (National Center for Bio-Medical Research and Training at Louisiana State University’s Counter-Terrorism School to train law enforcement officers when collecting evidence in hazardous environments.

eTWIST® at approximately $7,000 easily fits into even the small agency budgets. State and local law enforcement agencies are able to apply for federal funding through the Byrne Justice Assistance Grant program or others to assist with purchasing technology. Given that the average police agency receives about 100 cases per week with 25 of those needing evidence tracking, it takes an average of 2 hours per case (50 hours per week for 25 cases) to input that information into computer systems or to hand-write the reports. Using eTWIST®, the return on investment is estimated to take only 5-8 weeks. Primarymarking.com.