British Prime Minister David Cameron says a military-led rescue mission into the Libyan desert was “the right thing to do,” despite the fact that U.K. planes didn’t have permission to enter Libyan airspace.

Three Royal Air Force C-130 Hercules aircraft successfully evacuated some 150 civilians of multiple nationalities from eastern Libya, according to a statement from the Foreign and Commonwealth Office (FCO). The civilians were retrieved from multiple locations in the desert south of Benghazi, said Liam Fox, the secretary of state for defense. Another 150 civilians were flown out by British forces in similar missions mounted Saturday, according to previous statements from the FCO.

One plane was hit by small arms fire when it tried to land at an airstrip, according to a press officer with the Ministry of Defence, but the damage was superficial and the plane was able to continue. All three aircraft have arrived in Malta, the officer said.

At a news conference Sunday, Cameron celebrated the successful return of the three C-130s. “Good work has been done today,” he said. “I pay tribute to the very brave pilots and armed services personnel who’ve managed to help so many British citizens back to safety.” 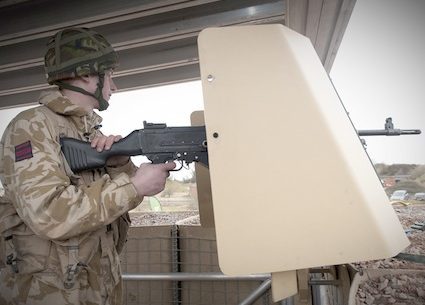