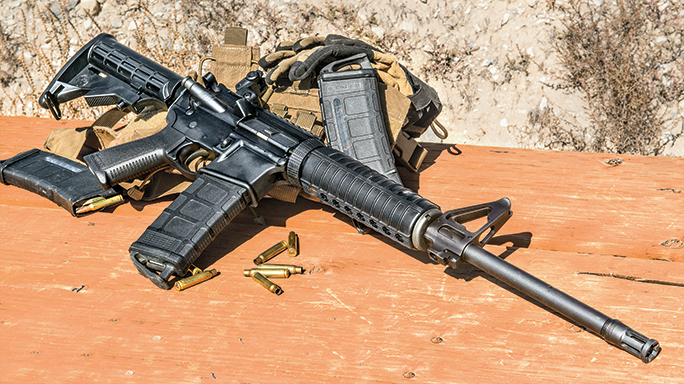 1 of 3
AR-556 & More: Ruger’s Ever-Ready AR Arsenal
Ruger’s AR-556 is a dependable M4-style rifle with plenty of tank-tough features despite its highly affordable MSRP of only $749. 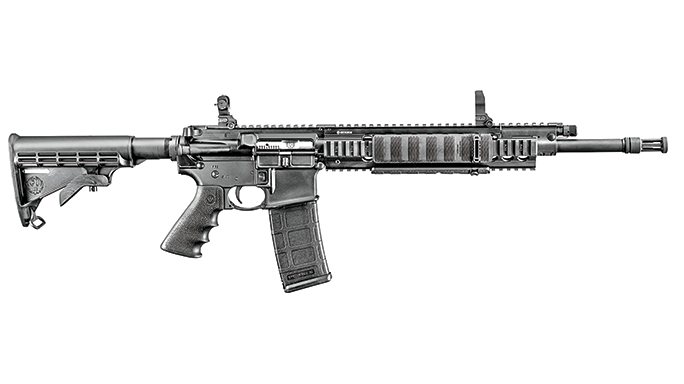 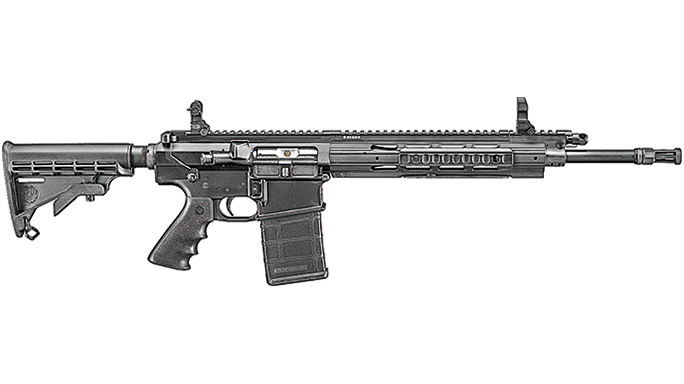 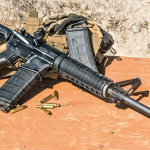 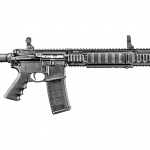 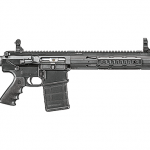 Ruger has been taking the tactical market on with a vengeance over the last few years, especially when it comes to the AR rifle.
Its SR-556 brought a high-quality, piston-driven AR to the masses during a time when costs were all but stratospheric. But dedicated fans and knowledgeable consumers have clamored for a simple, cost-effective AR from Ruger using the proven direct impingement gas system. Ideal for most users, direct impingement AR rifles are simple, light, reliable and less costly. Few American firearms companies are better suited to this task than Ruger, with its storied history of building high-quality products at a reasonable price. Bringing this mindset to the AR-556 was a perfect match.

The AR-556 uses an oxide-coated bolt carrier with chromed interior and a staked gas key. Built from 9310 steel, it has been shot peened and magnetic-particle (MP) tested. It includes an ejection port cover, a forward assist and a brass deflector.

The rifle’s front sight is milled and includes a serrated ramp to cut down on glare, while the flip-up rear sight is windage adjustable. Being standard A2 height, this unit will work with any rear sight and includes a QD flush cup on the bottom. The A2-style handguard is built from heat-resistant, glass-filled nylon and features a delta ring for attachment. Simply unscrew the ring and any M4-compatible handguard can be added without the use of any tools.

A mil-spec, six-position buffer tube holds the AR-556’s M4-style buttstock. Ruger also added its ergonomic grip for improved trigger reach as well as an enlarged triggerguard. The single-stage trigger is crisp and predictable. Shipped in a cardboard box with a foam liner, every AR-556 includes one Magpul PMAG, a lock and an instruction manual.

I began my accuracy testing with the rifle’s iron sights and Federal LE .223 Tactical, my department’s issue round and a popular duty round. Most who buy this rifle are going to start with iron sights. Starting at 50 yards from a kneeling position, it was possible to keep everything inside a 6-inch circle. Moving to prone, groups were half that size. This is more than accurate enough for most any real-world engagement in a self-defense or duty capacity. At 25 yards and closer, the AR-556 was as accurate as this platform gets. Stretching it out to 100 yards, the rifle was plenty accurate for duty use, holding well inside 2 inches. My guess is the rifle is more accurate than me these days with iron sights, but it will serve well in most any environment.

An EOTech EXPS3 was attached for official group testing and chronographing. The EOTech is still one of the most popular sighting systems for police rifles. It mounts simply, co-witnesses iron sights and is priced fairly. Silver State Armory’s 77-grain OTM rounds grouped right at an inch. Hornady’s 60-grain TAP provided similar results. Everything was under 2 inches at this range. Comparatively speaking, the AR-556 is as accurate as most stock ARs I’ve tested over the last several years. Nothing is compromised on this rifle.

I ran the AR-556 hard on the range and it never failed. While shooting rapid-fire strings, from either side, upside down, from awkward positions and even with a sloppy shoulder, it always worked. Clean or dirty, and with all kinds of ammunition, the rifle performed well.

Most testing was completed using Black Hills reloads, and it never missed a beat. It worked with every PMAG, aluminum mil-spec and Lancer magazine whether they were loaded with duty rounds or FMJ ammunition. The rifle remained accurate throughout. It did get a bit hot under the handguard during sustained fire, but that is normal. Under normal conditions, the factory handguards were fine. The AR-556 handled everything thrown at it without a single issue.

Ruger has really nailed it with this rifle, and its popularity provides solid evidence of that. It is simple to operate, lightweight, accurate and reliable, all for a price that won’t break the bank.

Ruger’s piston-driven AR rifles came at a time when ARs were overpriced in general, with piston-driven rifles leading that pack. Truly reliable rifles using a gas tappet piston system generally started at $2,500 and went up from there. Many 7.62mm rifles reached close to $4,000. Ruger’s SR-556 in 5.56mm cut that in half with a package that provided all you needed to hit the range. While prices have stabilized, Ruger’s SR lineup remains one of the best buys on the market through its solid features, reliability and attention to detail.

Originally built to meet a military contract requiring sustained automatic fire, the SR series’ barrel is rather stout. It was also designed to include a quick-detach feature, which is imperative on a machine gun designed for sustained fire. With customers asking for an AR, Ruger decided to introduce the civilian-legal rifle with the same barrel minus the quick-detach system.

That changed this year, however, with the introduction of a quick-detach barrel that is much thinner, cutting down on weight without compromising accuracy or reliability. Just pinch and pull, twist the barrel and it comes right out; reverse the process to install. Initially available in both 300 BLK and 5.56mm, the design breaks down easily and fits nicely inside a Ruger Takedown Case. Future SR-556 rifles will only come with this barrel.

The new Ruger SR-556 is chambered in 5.56mm, uses M4-style cuts for reliability and has a barrel offering a 1-in-9-inch twist rate. Chrome lined and cold hammer forged, this barrel is well suited to both hard use and accuracy. Easily removable, it can be replaced with separate barrels of various lengths and calibers. All barrels will use appropriate barrel threading and will be equipped with removable flash suppressors.

A railed handguard provides space for lights, lasers or other aiming aids while covering the two-stage piston system. A four-position gas block allows user to adjust for different styles of ammunition and suppressor use.

Forged upper and lower receivers provide proven strength and operation. Ruger’s bolt carrier is a one-piece unit that’s built to exceed mil-spec standards in strength and durability. Hogue’s Monogrip pistol grip provides comfort while an M4-style, six-position buttstock mates the rifle to your shoulder. Ruger’s folding iron sights are provided and attach to the top rail. Supplied with three 30-round PMAGs, this rifle it is ready for action right out of the box.

Beginning this year, SR-556 barrels will be available in 300 BLK. Each 300 BLK barrel includes an installed gas block and front sight, and magazines that are clearly marked for caliber to avoid the accidental insertion of the incorrect ammunition. The cold-hammer-forged and chrome-lined barrel utilizes a 1-in-8-inch twist rate that’s optimized for the most popular loads. Shooting an SR-556 rifle equipped with one of the new 300 BLK barrels at a recent media event, I found it to be reliable with supersonic ammunition, both with and without a sound suppressor installed. The test 300 BLK carbine’s accuracy was excellent, and it proved reliable as well.

At the heart of the Ruger SR-762 rifle in .308 Win. is its precision-rifled, chrome-lined, hammer-forged barrel. Built from 41V45 chrome-moly steel, it insures accuracy and a long life. Fluted to save on weight, it offers 5/8×24 threading and includes a Mini-30-style flash suppressor. The barrel’s 1-in-10-inch twist rate ensures operation with the most common ammunition on the market. Adjusting for variances is accomplished with the four-position gas block and the rifle’s two-stage piston system. Ruger’s bolt and bolt carrier are chromed for easy cleaning and reliable operation under harsh conditions.

Ruger’s round, smooth-sided, lightweight handguard covers the barrel. Rails can be added at the 3, 6 and 9 o’clock positions. Hogue’s Monogrip helps keep things under control and a six-position, M4-style stock sits on a mil-spec-diameter buffer tube. Three 20-round Magpul PMAGs are included with the SR-762, along with three finger-grooved rail covers, all in a soft-sided case.

Ruger continues to lead the way when it comes to proven reliability, simplicity of design and prices geared towards the everyday consumer. Rugged, reliable, well thought out and accurate, Ruger’s AR and SR lines of rifles continue to impress. 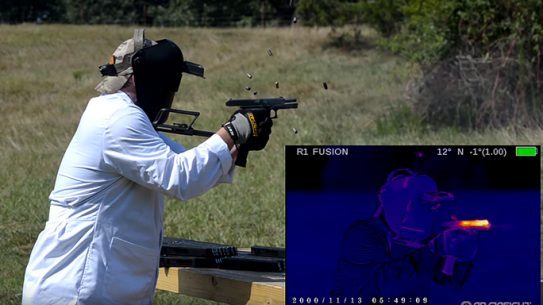 YouTuber IraqVeteran8888 takes a fully automatic Gen 3 Glock 17 and fires as many...