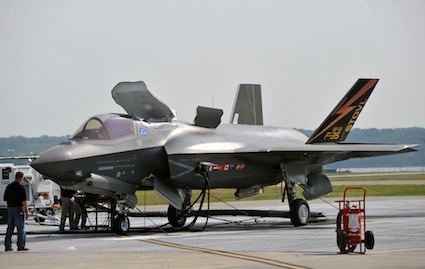 The cost of building the F-35 fighter jet, set to replace a large part of the US warplane fleet, is “unaffordable” in its current version and must be reviewed, the Pentagon’s top acquisition official said Thursday.

“Over the lifetime of this program, the decade or so, the per-aircraft cost of the 2,443 aircraft we want has doubled in real terms,” said Ashton Carter, the under secretary of defense for acquisition, technology and logistics.

“That’s our forecast for how much the aircraft’s going to cost.

“Said differently, that’s what it’s going to cost if we keep doing what we’re doing. And that’s unacceptable. It’s unaffordable at that rate.”

The cost of the plane has jumped to $385 billion, about $103 million per plane in constant dollars or $113 million in fiscal year 2011 dollars, said Christine Fox, the Defense Department’s director of cost assessment and program evaluation.