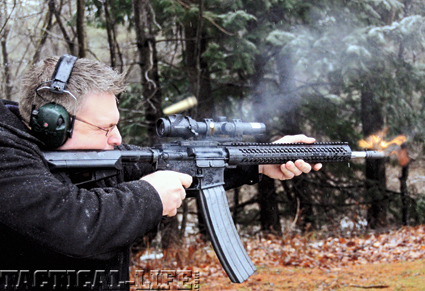 Sporting a 100-round SureFire magazine and Swarovski optic, the Stag 3G performs exceptionally well—see how close together the spent casings are? The 3G brings all the speed and accuracy needed to take home trophies, from competition or hunting.

Back in 1981, Barbara Mandrell recorded a song called “I was Country When Country Wasn’t Cool.” It was a huge hit, dominating the charts that summer and became one of her signature songs. It’s also become a piece of Americana that is paraphrased often. So, if you will indulge me a bit here: “I was 3-Gun when 3-Gun wasn’t cool.”

Well, actually, that’s not totally correct. Three-Gun shooting has always been cool. But I was doing it before it got “discovered.” In fact, when I first started I had trouble getting the editors of shooting magazines to accept more than a token article now and then. Today, 3-Gun shooting is on its way to becoming the dominant shooting sport and it’s a big part of what I write about to earn my daily bread.

Oh yeah, I just heard a report a couple of days ago that there are more country music radio stations in America today than all the other music formats combined. So I guess Barbara and I were both ahead of our time. I just wish gun writing paid as well as singing. 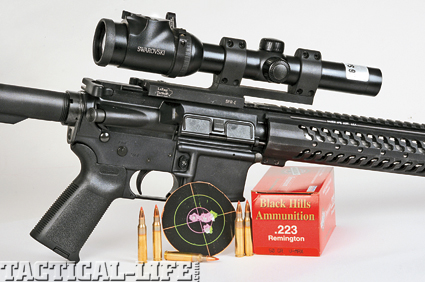 Tight accuracy groups are the norm with the 3G, especially with Black Hills ammo loads.

Many of those early articles that I wrote were on how to customize the guns to make them competition-ready for 3-Gun shooting, as nobody made a “3-Gun”long gun. I think it’s a huge statement about how “cool” 3-Gun has become with mainstream shooters that so many top companies are now introducing “competition-ready” out-of-the-box firearms today.

For example, Benelli’ s new 3-Gun shotgun was introduced in late 2011 and I believe is the first ready-to-roll, just-add-ammo shotgun for this sport. Some rifles, like the JP Enterprises JP-15 that I compete with, can be ordered competition ready. But, I think that the new Stag Arms Model 3G might be the first rifle that is designed around the sport, by serious competitors, and marketed specifically for 3-Gunning.

Stag is well known for producing left-handed AR-15-style rifles as well as the conventional right-handed models. They got noticed for the southpaw aspect but built their name by producing high-quality rifles. For the record, the Stag 3G can be ordered in right- or left-handed models. I have a couple of shooting buddies who are very happy about that.

Stag Arms worked with their 3-Gun shoot­­­­­ing team to develop the new rifle, and after shooting it quite a bit, I think they got it almost right. That’s not a statement I make lightly, as it’s been pointed out to me that I would probably gripe about free money. There are just a few things I would change. For example, I would add an extended charging handle latch, a tactical bolt release and possibly an ambidextrous safety. But these are small things and this gun is ready to run fast and reliable right out of the box.

The rifle uses an 18-inch, stainless steel semi-heavy barrel that measures 0.73 inches near the muzzle and uses a 1-in-8-inch twist rate. The chamber is 5.56mm NATO, so it can fire both 5.56mm and .223 Remington ammo. The barrel has six flutes that are interrupted by the gas block for the rifle-length gas system. The last 0.75 inches of the barrel step down to a 0.71-inch diameter near the muzzle.
The barrel is fitted with a 2.25-inch-long compensator installed with a crush washer. This unique compensator has nine quarter-inch holes in three rows of three. One row is along the top center and the other two rows are close on each side. Some holes are angled; some are straight. There are also three smaller holes in the top-front of the compensator pointing forward. This is perhaps the most effective brake at countering muzzle flip I have ever tried. If I had to find a complaint with the rifle, it’s that the brake actually will drive the muzzle too low with each shot so that the sights end up under the aiming point. While it’s a bit distracting at first for a shooter used to a more conventional muzzle brake, I suspect that this brake could provide a strong advantage with practice.

We did some drills using fast double-taps and even some fast 10-shot strings at close range and I found that once I got the hang of it I could get the sights back on a 10-yard target faster than my finger could pull the trigger. I had the impression of waiting for the shot while I watched the dot on the Swarovski Z6 optic float on the “A” zone. That’s not something I encounter with most rifles, as it usually takes more time to get the sights back on target than to pull the trigger. I am not sure if that’s a function of the brake or the trigger, but I suspect it’s a combination of both. While I was not using a timer on these drills, the photos would indicate that this gun is extremely fast, as two shell casings would often only be a few inches apart in the air.

The gun is fitted with a Samson Evolution free-floating handguard. This handguard comes with a rail along the top. There are holes along the sides and bottom to add more rails if you want them. The sides are skeletonized with a double row of cuts on each side. The diameter of the handguard is 1.83 inches, which is easy to grip. The 15-inch handguard extends well past the low-profile gas block. One of the problems with most AR-style rifles when used for 3-Gun shooting is the short handguard. 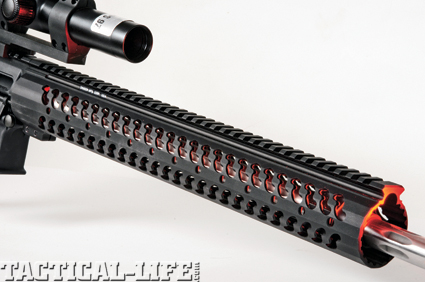 The Samson Evolution free-floating handguard is plenty long enough for a spaced-out competition grip, and you can add more accessory rails.

A tip that some of the top 3-gun shooters have taught me is to have the weak hand extended way out on the front of the gun. Never hold the gun in front of the magazine well. Rather, get your hand out as far as you can. You long-armed types, please don’t take that to mean put your fingers in front of the muzzle. I have actually seen that done with an MP5 during a match and it was not a pretty sight.

Grip the forend on the side, with the elbow extended parallel with the ground. This gives much better control of the rifle for lateral movement for rapid target transitions. Try this with a short handguard and all you get is burned fingers. This long handguard proves to me that Stag Arms listened to some real shooters when designing the rifle.

Another point of contention on most AR-15 rifles is the trigger. Many AR builders are stuck on “Mil-Spec Stupid” and forget that shooters need good triggers. It’s not uncommon to have precision targets at 500 or 600 yards or even farther in a 3-Gun match. It’s a huge handicap to have a 10-pound “battle trigger” that’s rougher than Rosie O’Donnell’s personality. Unless you order a better trigger as an option, almost all rifles will need an expensive replacement before using them in competition. One popular replacement trigger is the Geissele Super 3-Gun trigger. This Stag rifle comes with that trigger as standard equipment.

Geissele made their reputation with two-stage triggers for AR rifles. I have one in a hunting rifle and it’s excellent. This new trigger was developed by Geissele for 3-Gun and uses what they call a ‘hybrid pull.” It’s a longer pull than most match-grade single-stage triggers, but smooth and clean. On my rifle, it breaks at just slightly over 3 pounds. 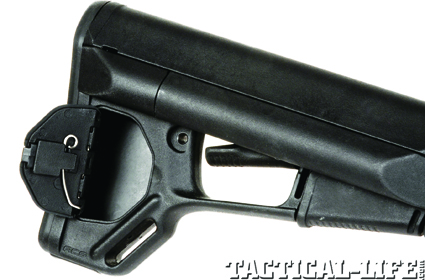 Magpul’s ACS stock includes a storage compartment and the sides are shaped for a tighter, more comfortable cheekweld.

The buttstock and pistol grip are from Magpul, featuring their collapsible ACS buttstock and their MOE hard plastic pistol grip. Both have storage compartments. The rifle is also available with optional Dueck Defense Rapid Transition Sights (RTS), which are offset iron sights that are used for close-in shots. Barry Dueck, a top shooter who I have had the pleasure of pairing with in several matches, developed this system.

In all but Open Class of 3-Gun shooting you are limited to one optic, which is almost universally on the rifle. I choose the 1-6X Swarovski Z6. That means I can turn it down to one power, which is no magnification, turn on the electronic dot and use it like a red dot with both eyes open for close stuff. Then, using a MGM Switchview lever, I can quickly turn it to 6X for the longer shots. This works great for me, but there are some shooters who prefer more magnification on the top end for the long shots, particularly those who compete in the west where long shots are common.
Open Class shooters often install a 3-9X or larger scope and then put a small, reflex red-dot sight at a 45-degree angle for the close targets. It’s very fast to simply roll the gun, keeping your cheekweld, and line up with this sight. But the other 3-Gun classes are not allowed this second optic. They can, however, have iron sights. So the Dueck Defense RTS are mounted at a 45-degree angle to provide an iron sight option for the close stuff. If you are planning to compete with a scope that does not have zero magnification at the low end, you should consider this option. It will add $200 to the $1,459 price tag of the gun.

I tested the rifle by shooting three different factory loads and one handload using bullets ranging from 50 to 75 grains. The average for three 5-shot groups with each of the four loads was 1.23 inches, which is excellent accuracy.

When I put out the word that I am bringing all the guns, targets and all the ammo for some 3-Gun practice, I do not have any problem finding willing shooters. My shooting buddies and I took this gun to the range a few times to practice running some rifle scenarios. After several hundred rounds, we are in universal agreement that this is a well balanced and well behaved 3-Gun rifle. We experienced no jams or failures to operate. We found the gun handled well for the fast stuff and settled fine for the long-range precision work. After we ran out of ammo and I wanted to pack up and go home, the only complaint was that I “didn’t bring enough bullets.”

Anybody looking to get into 3-Gun shooting would be well served to check out this rifle. All you add are optics and ammo and it’s competition ready. 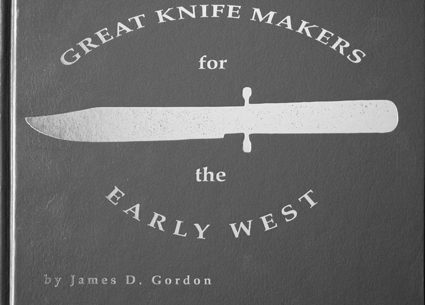 Great Knife Makers For the Early West By James Gordon