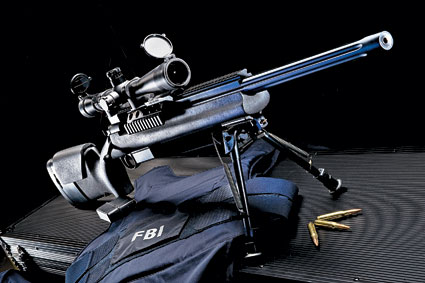 It’s not every day that an agency the size of the FBI trades off old artillery for new hardware. Large weapons inventories are expensive to replace, and the process involves overcoming a lot of inertia and tending to much paperwork minutiae. When the Bureau does upgrade equipment it has a compelling reason and, based on lessons learned in the past, typically puts potential candidates through the fire.

At the time the FBI formed its special-response teams, and for many years thereafter, their dedicated long-range rifle was built by in-house armorers, and maintained by in-house armorers. Nationally, there was no standard “FBI Sniper Rifle,” nor standard brand, model, or configuration. Seven years ago, a proposal was made to replace all of the miscellaneous sniper rifles in field offices across the country with one standard rifle package to simplify training, maintenance, and the need for specially trained armorers to keep them all running. 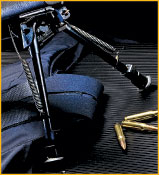 The FBI was satisfied with the .308 caliber, aware that most LE rifle engagements take place within 75 yards, and they had substantial stocks of .308 ammunition in place. Beyond that, repeatable accuracy, durability, suitability for projected FBI needs, and follow-up services were general requirements. Several companies were invited to participate. All candidates were thoroughly tested, and when the smoke cleared the winner was H-S Precision with its submission, the Pro-Series 2000 HTR (Heavy Tactical Rifle).

While the Bureau doesn’t give out numbers, our information is that between 450 and 500 of these rifles are now in FBI hands, with a sticker price of just over $3,000 a unit. The Bureau was obviously impressed: What did they get for our tax money?

External steel surfaces including the 416-series stainless barrel and 17-4 stainless receiver are finished in matte black Teflon. The barrel crown is recessed to pre­­­­­­­vent damage if dropped on the muzzle. The massive McCann Industries 17.25-inch Picatinny rail assembly (part of the standard FBI package but not sold with the basic rifle otherwise) allows nearly 6 inches of leeway at the rear to mount glass, almost 7 inches up front for supplemental optics (such as night vision) if needed, and 5 inches on both sides for accessories such as lights and lasers. The heavily pebble-grained stock carries two sling-swivel studs on a rounded, grooved fore-end and features a full pistol grip wrist. The stock adjusts via two knurled wheels to raise or lower the comb and match the length of pull to the shooter. The non-slip H-S rubber recoil pad is just less than an inch thick, more than handles .308-level recoil, and has no angular corners at heel or toe to dig into a shoulder or snag on clothing.

Detachable box magazine capacities vary with caliber; H-S offers two different mags in .308 Winchester and lists one four-rounder and one ten-rounder. The test rifle came with the shorter magazine, but it actually holds five rounds and seats perfectly with one in the chamber to bring on-board capacity up to six in ready mode. The magazine itself is sturdily built and reliable in feeding, and it drops free one-handed for a quick reload (full or empty) by pushing forward on the latch inside the trigger guard with the trigger finger.

The HTR’s Remington-style bolt uses the typical internal extractor and plunger ejector of that system, but with a full three-position wing safety at the rear. The safety locks the bolt, trigger, and sear when fully rearward, the middle position unlocks the bolt but leaves the trigger and sear locked for safely working the action to load or unload, and the forward position is All Systems Go. The bolt, incidentally, is extremely well fitted to the action and travels very smoothly in its raceways. The bolt handle ends in a smooth round ball, and the bolt release is a small tab on the left side of the receiver opposite the safety. My trigger finger and my trigger gauge disagreed on the test sample’s flat-faced-trigger pull; the gauge broke at 3.25 pounds, but with absolutely no take-up or overtravel whatever it felt at least a pound lighter. Considering the nature of the job the Bureau bought the gun to do, the trigger’s ideal, in my opinion, and I wouldn’t go down any lighter.

H-S Precision manufactures nearly every component of the HTR (stocks, barrels, actions, bolts, triggers, etc.) which allows for superior quality control, and the results are good enough for the Marines to use their barrels in the Corps’ M40A1 sniper rifles, while the Army uses H-S Precision stocks in its M24SWS program. That speaks well for the company’s acceptance among some heavy hitting outfits.

Leupold Mark 4
In setting up this review, TW asked H-S for an exact duplicate of the FBI package. The HTR itself is actually an off-the-shelf model that the FBI shoots as is (with the exception of requiring the McCann rail for its optic mount), and it’s available to anybody. Same with the glass—regular production from Leupold’s Tactical lineup.

The test rifle arrived mounted with a matte-finish Leupold Mark 4 LR/T M1 3.5×10 scope with Mil Dot reticle. My test sample was a demo gun and it’d made the rounds by the time it got to me. The photos show a set of older, discontinued H-S Precision rings: Current FBI orders get a set of very strong Leupold Mark 4 30mm medium-height steel rings.

This scope comprises serious optics, despite its max 10X magnification. In an era when the tendency of many agencies is to over-glass tactical rifles, the Bureau has taken a very pragmatic route and selected the 3.5×10 as being perfectly adequate for the .308 caliber in scenario projections based on outside stats and internal determinations. With the bell curve falling inside 100 yards, the lower magnification opens up a wider field of view (observation is also a key part of the sniper’s mission) and the higher settings are viable well beyond 300 yards in rare cases where longer shots are required. In most relatively close urban settings, extreme magnification frequently works against the user—besides amplifying the target image, it also amplifies wobble and other tiny movements of the shooter, and this can be distracting.

The Mark 4 LR/T M1’s strong 30mm tube leaves plenty of room for windage and elevation adjustment, and that includes a full 65 MOA range in each turret with clearly defined quarter-MOA clicks. All three turret knobs, including the left-side parallax knob (allowing quick parallax focus from 75 yards to infinity), are easily finger adjustable with no caps to remove and no coin or screwdriver required. The Mil Dot reticle magnifies along with the image as the power ring rotates, which aids consistent range estimations at all distances. Bright, clear, and rugged, this Leupold glass has done well for the Bureau.

Like many, I do not shoot as well from a bipod as I do from a more solid rest. The Harris units are pro-grade equipment and widely used, and this is no reflection on them, but resting the fore-end of a rifle on any bipod potentially creates input from three different directions during the moment of powder combustion and recoil thrust, whereas resting only the fore-end on a single point (sandbag or other solid rest) creates input from only one direction. Primary input is rearward as the rifle tries to fly straight back, and secondary inputs come from the way each bipod leg reacts to the primary input. Bipods aren’t rigid; they flex back and forth, and the feet react differently based on what type of surface they happen to be standing on. Under recoil, they can “walk,” and that again can influence where the muzzle is in relation to the target as the bullet exits the bore.

Each FBI sniper trainee undergoes a two-week basic school that covers a variety of subjects, not all of which involve actual live fire. During those two weeks each agent learns to shoot the HTR from multiple body positions, and that includes different rifle rests that can run the gamut from a bipod, a softpack, a rolled up shooting pad, a wall, a car hood, a rooftop, and any number of other field expedient surfaces. Ordinarily, in testing a rifle for accuracy I use a solid one-point rest that doesn’t walk, doesn’t flex, and doesn’t provide lateral input. But, since the bipod was included with the rifle, and with a bipod mounted you always carry your rest along wherever the rifle goes, I attached it to the forward sling stud and used it during the test session. And I did not get quite the half-MOA groups the company promises. But, I frankly didn’t expect to, and that’s no mud on either the gun or the guarantee. As consistently as the HTR shot with all four loads, I have no doubt I’d have realized that guarantee if I’d had more time to spend bonding and to shoot it again off a better rest. In discussing the results with H-S, I was told the sample had been certified at under half an inch before it came on to me, and their test shooting was done using sandbags. On sandbags, I believe their results.

The FBI HTR produced respectable groups, even off the bipod. Starting at 100 yards with the magnification cranked low to avoid amplifying my heartbeat in the crosshairs, holding three shots under 1 inch wasn’t hard at all. Moving out to 200 yards and cranking the power ring up to about 8 held three shots under 2 inches, with the Black Hills Match barely running over 1 inch. Recoil in the 14-pound FBI configuration was negligible, and the ability to adjust the stock to individual neck and arm length is always better than the one-size-fits-all approach.

While the HTR isn’t the best choice for the casual shooter or hunter, in the hands of a dedicated end user who needs a precision rifle, indications are that the FBI spent our money well. The rifle is manufactured with premium materials, is solidly built, has established a satisfactory record in meeting the Bureau’s requirements, and since one important goal in the selection process was to eliminate the need for in-house armorers and servicing beyond routine maintenance, after-purchase support by H-S reportedly has been excellent.

Included in fitted cut-outs inside the Storm hardcase’s foam interior, H-S provides a cleaning rod, bore guide (to avoid crown damage during cleaning), boxed cleaning kit, torque wrench (for the scope ring screws), hex driver (for the action/stock screws), five short magazines, one small Allen wrench to fit the scope ring screws, the Harris bipod, and one logbook: Everything you need to maintain and shoot the HTR at the user level, minus ammo, glasses and earplugs. The base price on the gun, if you’re interested in adapting the core rifle to your own use with other glass and mounts, is $3,070. The McCann Rail retails for $500. If you want to duplicate the full FBI package, you’re looking at $5,582 and you can order it complete from H-S. Expensive, but for the environment this rifle operates in, quality always is. For more information visit www.hsprecision.com 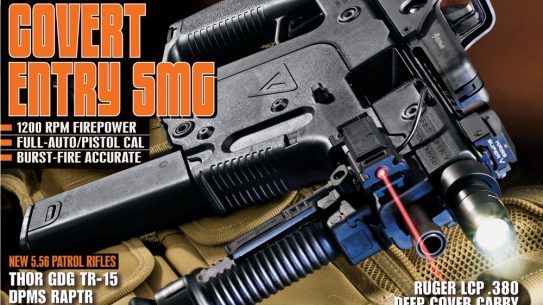