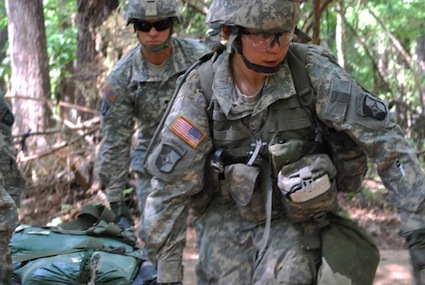 In a May 9, 2012 photo, Capt. Sara Rodriguez, 26, of the 101st Airborne Division, carries a litter of sandbags during the Expert Field Medical Badge training at Fort Campbell, Ky. Female soldiers are moving into new jobs in once all-male units as the U.S. Army breaks down formal barriers in recognition of what’s already happened in wars in Iraq and Afghanistan. (AP Photo/Kristin M. Hall)

The policy change announced earlier this year is being tested at nine brigades, including one at Fort Campbell, before going Army-wide. It opens thousands of jobs to female soldiers by loosening restrictions meant to keep them away from the battlefield, after the experience on the ground in the past decade showed women were fighting and dying alongside male soldiers anyway.

Col. Val Keaveny Jr., commander of the 4th Brigade Combat Team that is among units piloting the change, told The Associated Press that for the last decade it has been common to have women temporarily attached to the combat units and serve alongside them.

“Women have served in our Army since the Revolutionary War and they have done phenomenal work and continue to do so today. There is great talent and now we can have it in the headquarters of infantry, armor and cavalry,” he said.