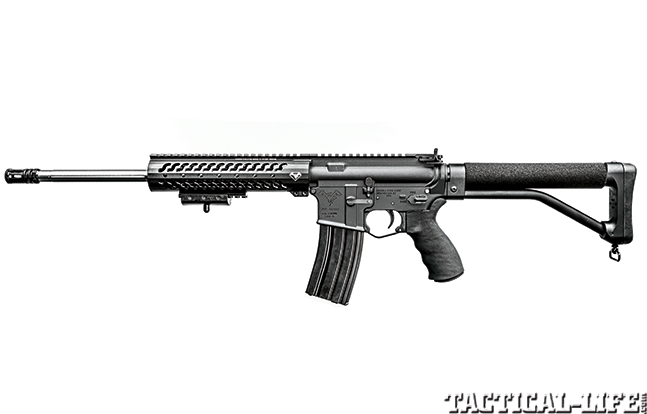 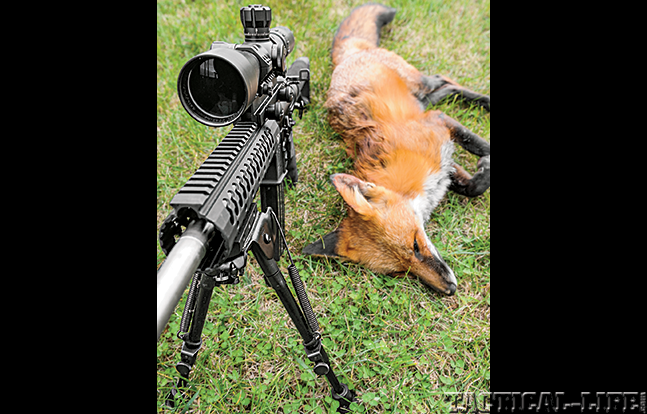 2 of 4
Field Test: Shooting the Customized Doublestar Starcar A3 5.56mm
The author’s customized StarCar rifle proved fast and accurate enough to take this troublesome fox down after it terrorized farmland in Virginia. 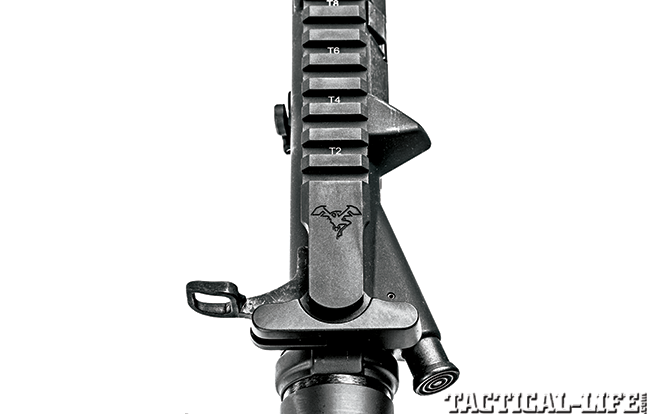 3 of 4
Field Test: Shooting the Customized Doublestar Starcar A3 5.56mm
The StarCar’s extended tactical latch makes it easier for shooters to charge the rifle when they’re wearing gloves or a large optic is installed. 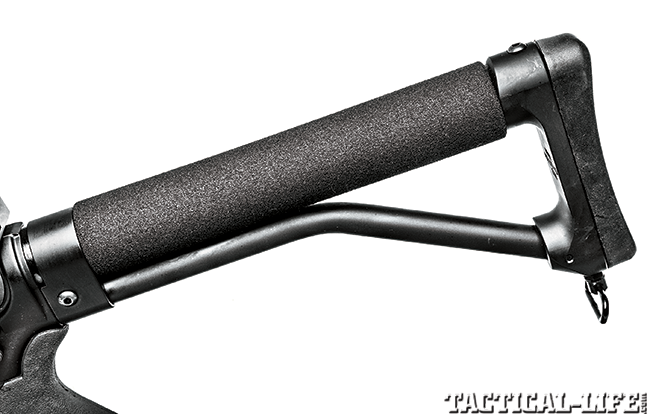 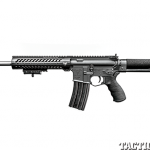 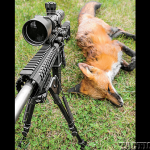 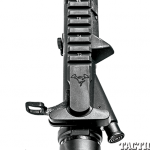 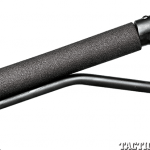 Foxes aren’t hard to HUNT if you see them. The trouble is seeing them. They’re fast. They’re sly. They’re small. So, when you do see them, you need a rifle that can get out of its own way and deliver accurate, repeatable fire from 10 feet to 300 yards. It makes sense that a rifle platform trusted to defend freedom by eradicating one vermin like your garden-variety terrorist would work just as nicely on domestic farm varmints like foxes, coyotes and other pests. You need to be able to use a day scope or a night scope. You need to be able to add a bipod, maybe a light, or whatever else is legal to use in your state.

In short, what you need is an AR, and while Eugene Stoner probably never envisioned his original combat rifle design being adapted to eradicate furry creatures, the truth is that it’s just about the perfect platform for thinning the local barking predator population thanks to its low recoil, semi-automatic action and incredible accuracy. So, when the opportunity to take an AR-style rifle predator hunting presented itself thanks to some chicken thieves causing havoc on a local farm, AR Rifleman reached out to DoubleStar Corp., a Kentucky firearms manufacturer specializing in AR-platform rifles, for a suitable option for predator-eradication duty. The company responded with a custom-built StarCar A3 semi-automatic rifle chambered in 5.56mm NATO, fresh from the Kentucky gun-builder’s plant, that proved to be a worthy predator assassin.

The rifle started as DoubleStar’s 16-inch-barreled StarCar A3, and then the gun-builders started tweaking it by upgrading the barrel to a Wilson air-gauged, 1-in-8-inch-twist model. The upgraded barrel is lighter than a bull barrel, and since DoubleStar knew I’d be trekking acre after acre of Virginia farmland after predators, the Wilson barrel was the right choice.

The next noteworthy upgrade was the installation of a CMC single-stage trigger that broke cleanly at 3.5 pounds. Every time I showed the rifle to buddies, which included a large assortment of active and former military folks from my days as a Navy combat photographer, the first thing they talked about, even after I left, was the trigger and how light, crisp and repeatable it was. The folks at DoubleStar added a few other enhancements, including a DSC Rail Bipod Adapter to allow me to lie prone in fields where I’d call predators in to their doom, and a Badger Tactical Latch charging handle so I could work my rifle’s action with a massive riflescope mounted.

The rest of the custom upgrades included a Sampson 9-inch Evolution handguard, which offered a smooth, comfortable handhold and a long top rail that mated up perfectly with the upper receiver’s, a DSC Enhanced Triggerguard and an ERGO SureGrip. I like the ERGO grip because of how it feels in my hand in a hunting situation, where I often have my target lined up and hold on it until I decide to shoot or not.

Once the rifle arrived, the next step was to pair it with the right optics. Bushnell supplied an Elite Tactical LRS 3-12x44mm scope with a first-focal-plane G2 reticle, Bushnell’s superb RainGuard HD coating and side-parallax adjustability. The company’s decision to place the reticle in the first focal plane was no accident—it wanted the reticle to increase in size when the magnification is increased. Bushnell said this feature allows for the continued use of the mil measurement system contained in the reticle regardless of the power setting. According to Bushnell, second-focal-plane reticles restrict the user to making measurements at a specific power, as the reticle remains the same size and will not account for different magnification levels. When you’re after a coyote, fox or groundhog at a variety of distances, anything the optic can do to help you range the target’s distance is welcome. Bushnell said the G2 reticle, developed in conjunction with G.A. Precision, provides a clean reticle space while giving you the ability to range targets with extreme accuracy using 0.1-mil reference points. The extended horizontal mil markings on the lower portion of the vertical crosshair can be used for ranging and windage holds.

The next step was finding the right ammo, and when it comes to pelts, most hunters will agree that the folks at Hornady know exactly what they’re doing. I fed the DoubleStar rifle a steady diet of Hornady Varmint Express .223 Remington, 55-grain V-MAX rounds, and it liked them a lot.

I first sighted the rifle in and then fired groups of three-, five- and 10-shot strings at 100 yards to see how well the StarCar would deliver bad news to predators. It certainly could. Groups shot from a sandbag rest measured 1 MOA or better, with the one 10-shot group keeping under 1 inch as well. On the range, the rifle acted like a well-made AR, operating smoothly with each shot. The rifle’s build quality was obvious, with no loose parts, shaking or excessive noise from moving parts. The factory-supplied magazine never resulted in a failure to feed, the weapon never jammed, and the trigger broke consistently shot after shot. After sighting the StarCar rifle in and running several boxes of Hornady’s ammunition through it, I was ready to take to the woods.

Coyotes, foxes and other predators can be a bit of a challenge to hunt versus the more traditional whitetail and squirrel or rabbit wild game most Virginians squeeze the triggers on in the woods. Brushy, tight and noisy, leaf-covered forest floors give steely-eyed predators a huge advantage. I’d spend a lot more time looking for predators than looking at them, but once they decided to come to the party, the greeting the DoubleStar gave them was delightfully rude.

The DoubleStar’s first kill was a fox that was terrorizing a farmer’s chicken coop in a way every storybook would have you believe. Beaten twice by wind changes and bad ambush sites, I called him in once but failed to get my crosshairs on him. Then, he made a mistake and decided my soft dying rabbit call was just too enticing to ignore. At 200 yards, I could have popped the fox and called it a day, but hunting is never about taking the easy shot. I worked the call a little more as the fox, savvy to my game, worked his way around me to be downwind, crossing through the thickest, nastiest and wettest parts of the swamp to make his kill on what he was sure was a helpless, screaming baby cottontail.

I saw him again at about 100 yards, but he seemed hell-bent on coming much, much closer. I had to move a lot from the prone position as I tried to keep the fox in front of me. The DoubleStar moved effortlessly, and the adjustable objective on the Bushnell zoomed in and out and then in again as I got solid sight pictures on him with every pause in his death trot.

Still, this wasn’t my first predator, and I wanted to see just how close I could get him. Powder burns on a coyote or even this fox meant bragging rights. I softened my call a little more. Sometimes I swear I saw a string of lip-smacking fox saliva running from his mouth as he inched closer and closer to what he was still sure was an easy payday.

He hung up in a tree line and put his head down in a straight-up stare-down between him and my call, which was about 50 yards away from me. He only showed me his head with a straight-on shot, and it wasn’t going to work for me despite him being about 80 yards from me. Maybe I’m old fashioned, but I like shooting all my game right behind the shoulder. Headshots are for showoffs and campfire tales. The ERGO grip was really paying off for me, as my trigger hand gripped and then released it several times without losing my dexterity.

My heart was racing as I slowly let out one last death cry from my sacrificial bunny. The fox jumped out from the tree line and zigzagged toward my call—50 yards, 40 yards. He paused, lying down in the high grass. He sat there for maybe five minutes and the Bushnell Elite Tactical scope allowed me to stay on him without hurting my eyes. I blinked, and finally he began to crawl the last few yards. I centered the reticle behind his shoulder and panned the rifle with him the last few feet, and when he exposed his shoulder—just before he thought he had his dinner—I squeezed the CMC trigger.

I didn’t need a follow-up shot, but the semi-automatic rifle was ready to deliver if needed. The low recoil allowed me to follow my shot to the animal, and the next shot would have landed in a similar location. But there was no need—the Hornady V-MAX did its job, and my fox’s days of feasting on chickens and rabbits were over. 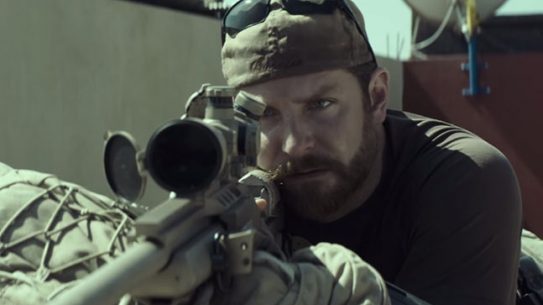 'American Sniper' is based on the book of the same name written by former...