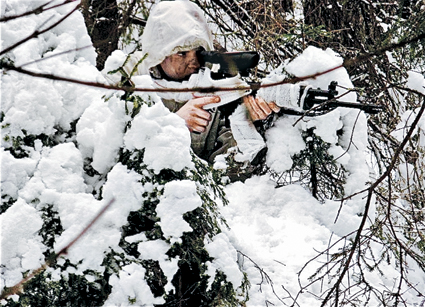 Finnish Jaegers can attack the enemy from the trees and snow.

During the Winter War of 1939-1940, Finland inflicted massive casualties on the Soviet Army using what could be termed “unconventional” warfare or special raiding tactics. Finnish troops were trained to hit hard then fade away into the snow and forests. These World War II raiders were the forerunners of today’s Finnish special operations forces. 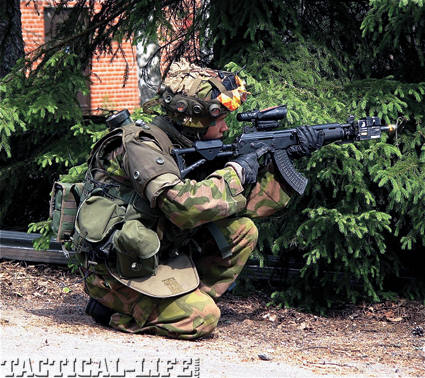 With his Velmet rifle sporting the Trijicon ACOG, this Finnish Jaeger is ready for what ever comes across the border—just like those before him who so heroically defended that same ground from invasion.

Special Units
Though not necessarily the most elite of Finnish special units, the Special Border Jaegers—the special ops unit of the Finnish Border Guards—reflect that spirit as they stand right on the border with Russia looking into the territory of their most recent enemy when they take their oath. However, during a war the Special Border Jaegers would carry out long-range patrols and guerrilla warfare around the border area to slow an invader. They may also be called upon to counter smuggling by dangerous criminals. 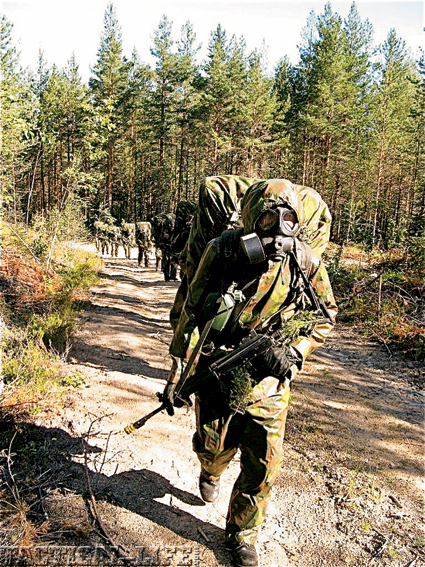 A Finnish Border Ranger trains to march in NBC (Nuclear, Biological, and Chemical) gear. Since an invader might deploy WMDs ahead of the advance, the Border Rangers train to be ready.

Another Finnish unit that has the sabotage and guerilla warfare mission is the Sissi, an elite light infantry unit, often compared to the U.S. Army Rangers. Another mission of the Sissi is to hunt and eliminate enemy special forces attempting to operate in Finland. The name Sissi comes from a term for “forest bandit,” and the Sissi train to live up to that heritage. Members of the Sissi are conscripts who undergo extensive guerilla warfare training and who would form “stay behind parties” in wartime. Many live in the forested areas of Finland and work as hunters, trappers, woodsman, or other trades that equip them for operations in the Finnish North. Others hunt, fish, ski, and hike as their hobbies. 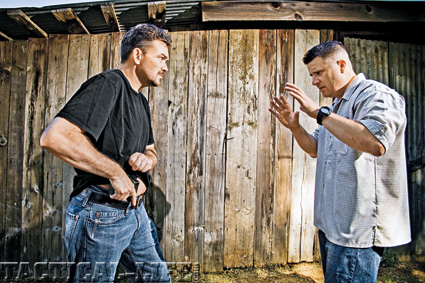 Finnish Jaegers can attack the enemy from the trees and snow. During the Winter…