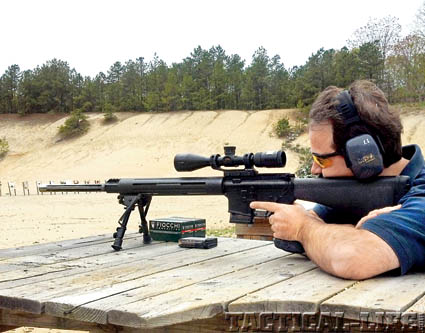 At 210 yards, the empty plastic soda bottle didn’t stand a chance against the scoped DPMS Panther 5.56mm rifle I was plinking away with. Shot after shot, the bottle lifted, popped and danced across the 100-foot-tall safety berm at a range near Nikon Sport Optics’ in Long Island, New York. A printout of the gun’s Spot-On ballistics table was taped to the rifle’s stock. At 210 yards—my guesstimate of the bottle’s range—the cheat sheet told me I should be holding on the first dot down from zero. Once dialed in, it was all over for just about every thing my colleagues and I cared to take cracks at.

After two hours of shooting and testing some of Nikon’s newest optical solutions, it truly hit me—rifle shooting is just plain fun to do! Guess you could say it’s a real blast to get out of the office to shoot stuff. Mind you, I cut my teeth shooting crows, squirrels and other pesky critters with a hand-me-down .22 after graduating from the Daisy Red Ryder killing fields—tin cans being the enemy. Dad found it pretty easy to hook me on whitetail hunting by taking me into treestands with him at the ripe young age of eight. And eight years later, after passing the New York State hunter’s safety course with flying colors, I became a real big-game hunter. To be honest, after 30-plus years in hunting camps, one can forget the simple joys of an afternoon of trigger pulling.

So am I a hunter or a shooter? When I was a kid, I’d have said hunter. The truth is, in many respects, a hunter and a shooter are one in the same. A hunter aims at his trophy’s vitals, but so does a shooter. It’s just that the shooter’s quarry doesn’t bleed (with the exception of some of today’s new zombie targets). To be a solid hunter, one needs to be a solid shooter. Author John Buol tackles this very idea in his feature about taking your bench skills to the deer woods. He dives into specific drills that will keep you at the top of your game.

At Rifle Firepower magazine, there’s no discernable difference between hunters and shooters. We understand that for the good of our shooting sports heritage, we’re all after the same thing: to experience successful, fun and safe times pursuing our passions for shooting. So whether you’re prepping for long-range or 3-Gun matches, gearing up for a long-anticipated hunting trip, searching for that special collectable firearm, finding the right custom rifle for your needs or looking for firearms to protect your homestead, we want to be your comprehensive source.

This issue, we’ve prided ourselves with giving you the full spectrum. There’s stuff in here that you won’t see in any other publication. At the extreme end, check out Dave Lauck’s tricked-out custom Texas Ranger Winchester 1892 lever gun. Potentially, the rifle will be heading to auction at the 2013 Texas Ranger Gala. The last time one of his custom Ranger .45s was on the block it fetched $40,000 for the Ranger Foundation and other charities.

There’s plenty of rifle and ammo fodder beyond Lauck’s high-dollar masterpiece. At the other end of the weapon spectrum we’ve covered air rifles. But these aren’t just ordinary BB guns like my old Red Ryder. We go Rogue .357, Benjamin’s new heavy-hitting, pre-charged pneumatic air rifle. Zipping actual .357 bullets at up to 800 FPS, the Rogue will take down coyotes as well as steel targets. Customs, air rifles, ARs, bolt actions, rimfires—whether you hunt game, paper or steel, this issue hits the mark. Please shoot us feedback at [email protected]—Nino Bosaz

MORE SHOOT HAPPENS: Last issue we cited John Browning as the creator of the M1A. In fact, it was designed by Springfield Armory’s founder Elmer C. Ballance in 1974. 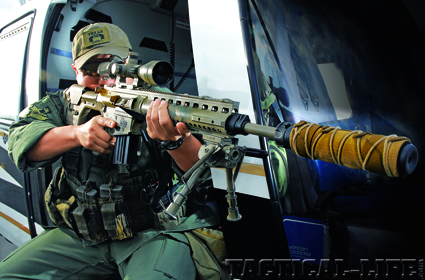 Lefty Editor-At-Large Michael O. Humphries is spot on! At 210 yards, the empty plastic…