While I’m conducting a mundane chore, like trimming brass back to spec, I have a lot of time to think. These days, I frequently ponder threats to the 2nd Amendment. One thing that disturbs me is the blatant mistrust left-leaning politicians hold for Americans in general and gun owners in particular. Countless times, I have heard the political rants from lawmakers and media mongrels about “assault weapons” and “high capacity magazine clips.” Their high level of ignorance and bigotry is apparent every time they mention high-capacity “clips,” or refer to semi-automatic carbines as “assault weapons.”

What I find horribly wrong is that many politicians and some in law enforcement leadership, state that American soldiers are the only ones who should rightly possess either full-auto or semi-auto, magazine-fed rifles in the fulfillment of their duties. Once that soldier takes off his uniform and becomes a private citizen, these politicians feel that he or she is not to be trusted with a “scary looking” semi-auto, mag-fed rifle or sidearm.

Politicians who don’t trust law-abiding American citizens don’t deserve our trust either. We can’t trust them to know a muzzle from a magazine, much less read and understand the 2nd Amendment as it was written. For this very reason, some politicians at the state level are taking a stand to protect the 2nd Amendment.

As of this writing, Tennessee and Wyoming state legislatures are preparing to vote on state-wide firearm protection acts to counteract New York’s ban on so-called assault weapons (known to you and I as household firearms) and high-capacity (let’s call them full-capacity) magazines, as well as thwarting any federal legislation that will limit legal citizens’ rights to own and use semi-auto firearms or magazines.

In Wyoming, Representatives Kroeker, Baker, Burkhart, Jaggi, Miller, Piiparinen, Reeder and Winters and Senators Dockstader and Hicks sponsored House Bill 0104 Firearm Protection Act. It states: “AN ACT relating to firearms; providing that any federal law which attempts to ban a semi-automatic firearm or to limit the size of a magazine of a firearm or other limitation on firearms in this state shall be unenforceable in Wyoming; providing a penalty, and providing for an effective date.” It goes further to state that no public servant or firearms dealer shall enforce any act, law, statute, rule or regulation of the United States government relating to a personal firearm, firearm accessory or ammunition that is owned or manufactured in Wyoming and that remains exclusively within the borders of Wyoming. Any official, agent or employee of the United States government who is found guilty of enforcing any U.S. regulation or legislation will be guilty of a felony, jail time between one and five years, fined $5,000 or both.

Tennessee State Rep. Joe Carr of Lascassas introduced a similar state bill that would put federal employees in jeopardy of committing a misdemeanor if enforcing federal legislation with similar language to Wyoming’s bill. During a pro-gun rally January 19, 2013, on the Legislative Plaza across from Tennessee’s Capitol building in Nashville, more than 1,000 gun owners gathered in protest. One thing’s for certain; it’s time to pick sides and fight with all legal means possible.

Big gamers have plenty to cheer about in this issue as we’ve tracked down two “firsts”—the inside look at a monster whitetail brought down by Remington’s new 783 and a world-record grizzly dropped by a CVA muzzleloader.

We’ve got some slick old school material as well! Wayne van Zwoll, walks our readers through refurbishing a 1917 Enfield in “Warhorse Reborn.”

General George Patton declared that the M1 Garand was “the best battle implement ever devised.” Read along as author Dr. Will Dabbs, MD, celebrates the Garand that U.S. servicemen carried across Normandy’s beaches to liberate Europe and extinguish The Rising Sun of Japan.
Check out these articles and many more that fascinate riflery aficionados, from blued steel AR10-platform rifles to tack-driving bolt guns to classics like the Model 99 Savage. There’s plenty of how-to information for do-it-yourselfers, too. 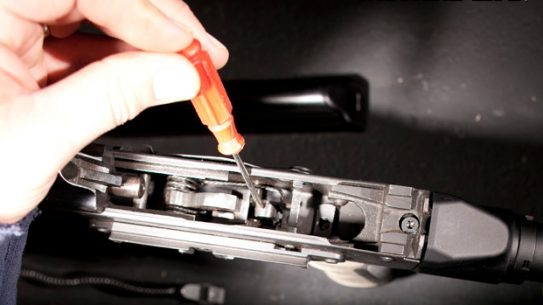 While I’m conducting a mundane chore, like trimming brass back to spec, I have…