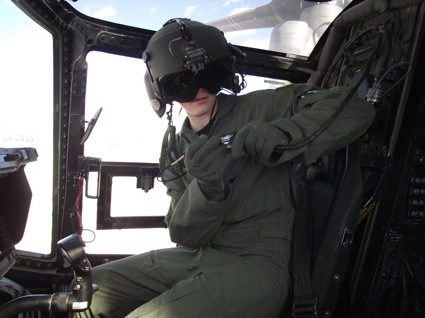 After nearly three years of flight training with the Air Force, she recently became the first qualified female pilot of the CV-22 Osprey tiltrotor aircraft.

It started with pictures of aircraft in her grandfather’s home. Then it was on to starting lessons to earn her private pilot’s license as a high school senior. It kept up through her Air Force training. First Lt. Candice Killian, a 58th Training Squadron student, has always wanted to fly.

“I had two major influences for initially getting interested in flying,” Lieutenant Killian said. “One was my grandfather. He flew civilian aircraft. I never got to see them because I was too young, but I saw pictures of them at his house and he would tell me stories. The other was a friend who flew. His father was in the Air Force. When my friend went to the Air Force Academy, he encouraged me to learn to fly.”

Lieutenant Killian said she went to her local airport to look into flying lessons. Within 18 months, she completed her private pilot’s license.

Lieutenant Killian said she wanted to join the Air Force to make a positive difference and to serve her country. It also fulfilled her desire to fly. She went to the Air Force Academy to start her training.

From the academy, Lieutenant Killian went to initial pilot training at Laughlin Air Force Base, Texas. The initial training, on the T-6A Texan II training aircraft, took about six months and included flight training and academics. After that, she went to Fort Rucker, Ala., to learn how to fly the UH-1 Huey helicopter.

“I knew I wanted to fly helicopters,” Lieutenant Killian said. “I like the mission role that helicopters in the Air Force generally fly, the broad spectrum of things we can do. Upon completion of the course at Fort Rucker, you can get CV-22s, UH-1s or HH-60 (Pave Hawks). The mission of the Osprey is very appealing.”