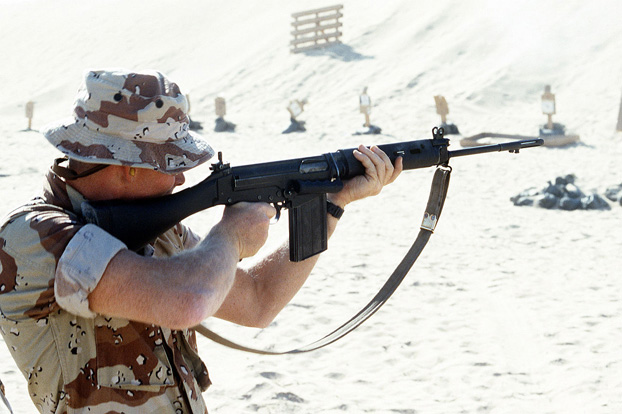 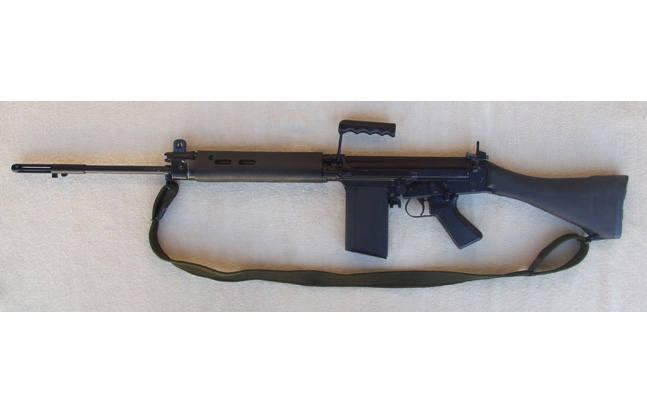 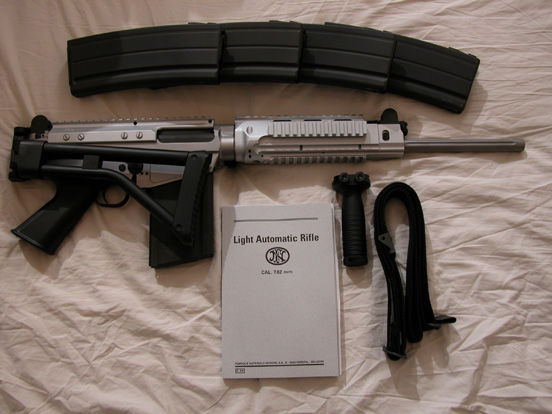 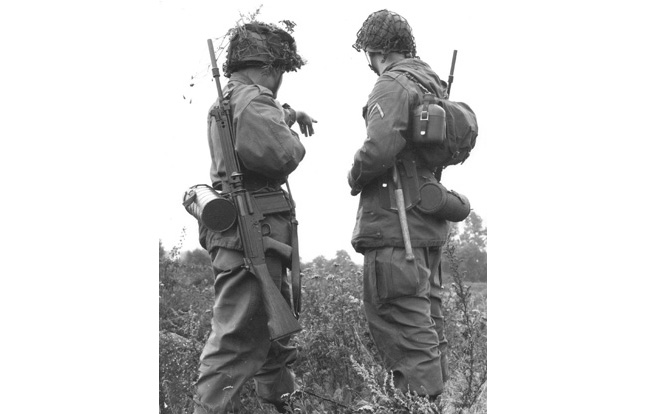 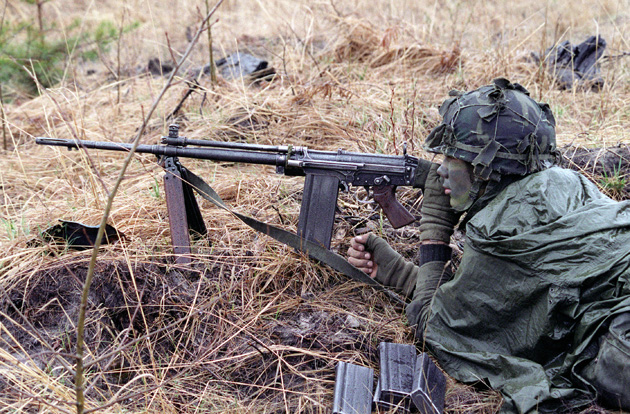 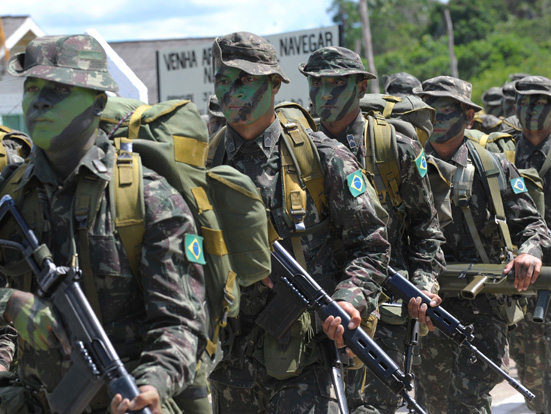 6 of 8
Brazilian-troops-march-with-the-FN-FAL.jpg
Brazilian troops march with the FN FAL. 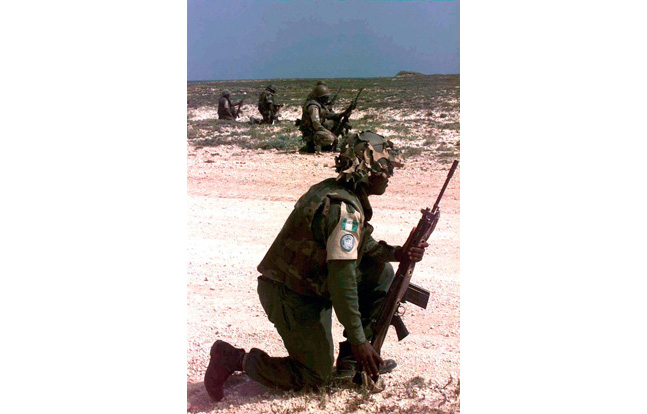 7 of 8
Nigerian-troops-in-Somalia-patrol-with-the-FN-FAL
Nigerian troops in Somalia patrol with the FN FAL. 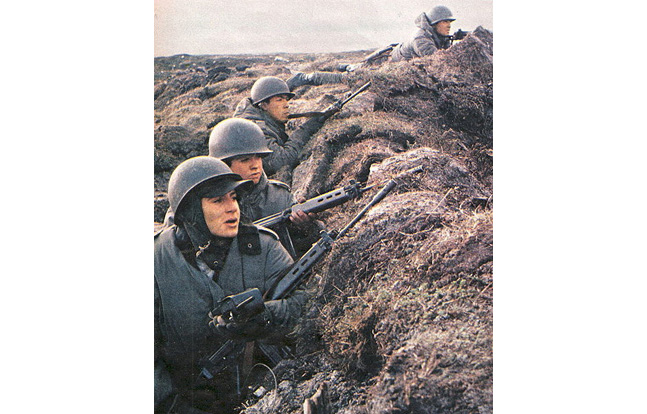 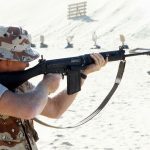 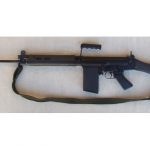 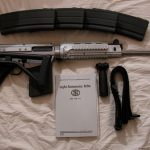 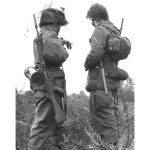 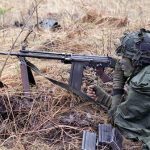 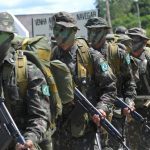 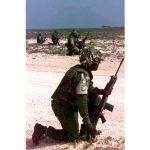 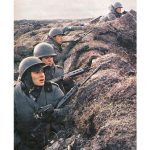 The “Right Arm of the Free World,” the FAL earned that moniker during a half-century serving some 90 nations, in more than 30 conflicts. It was produced in the millions by more than a dozen countries. It still is a frontline battle rifle for some, and is fighting in Syria today. It is in production as a civilian semi-auto in the United States. No small arm will ever reach the production numbers of the ubiquitous Kalashnikov, but the FN FAL may have it beat for the scope of its distribution.

The FN (Fabrique Nationale) FAL (Fusil Automatique Léger—Light Automatic Rifle) is a self-loading battle rifle, usually with selective-fire capability when so enabled. It is gas-operated and magazine fed, with a breech that locks via a tilting bolt. It became one of the most widely used rifles in history because of its reliability, ergonomic handling and combat accuracy. Although production of the FAL has almost always been in 7.62x51mm NATO, the first prototype was made in 7.92×33, the World War II German round, and exemplars were made in different trial configurations for the .280 British intermediate round, plus a run of 3,000 in 7x49mm.

The FAL may be considered both a contemporary and logical development of the Model 49 SAFN (Semi-Automatique-FN, or Saive Armee FN (in Belgian service, ABL Arme Belgique Leger). The SAFN’s Model 1937 development continued in England when Belgium was overrun. By the war’s end it was mature enough to be produced for countries upgrading from Mausers—but it was World War II technology. The chief designer was Dieudonne Saive, the Browning protégé who perfected the High-Power pistol.

The first prototype FAL was demonstrated to Belgian and British military observers in 1948. By 1950 it was described in FN product brochures, but not contemplated in 7.62x51mm NATO. After the United States convinced NATO allies that the 7.62x51mm (various loadings, based on the T65 case) was the best choice, FN redesigned the FAL for this round.

In thanks for liberating Belgium, Allied nations were offered royalty-free FAL licenses. The U.S. Army procured 3000 samples of the “T48” plus 200 heavy-barreled “T48E1s.” A trial run of 500 was made at H&R to ensure this “metric” design would work in inches, and 13 were made by High Standard. The T48 was tested against the T47, British EM2, and the T44 (M14). The tests favored the T44, and the Army adopted it. NATO accepted the T65 cartridge but most adopted the FAL. The rest is history.

As any design made in, or to the specifications of, some 90 countries, the variations seen in FAL production can only be delineated in a large book. It’s a fascinating study in military arms, however, even if we examine only the noteworthy differences between the main variants produced among the major players.
In any guise, the FN FAL is the classic post-war battle rifle. Formally introduced by designers Dieudonne Saive and Ernest Vervier in 1951, it was in production two years later. It is interesting that the greatest contemporary competitor on the international stage at that time was the AK-47, and some nations, such as Israel and South Africa, produced both rifles at the same time. Although the distribution numbers for Kalashnikov designs may be greater, offhand we can think of no countries who adopted the Kalashnikov over the FAL unless they were obligated to do so by their ties to the USSR, or were receiving them free as an instrument of Soviet policy.

Good To Go To War
The basic design of the FAL was so sound, various licensees saw little need to change anything internal as they tweaked this new rifle to suit their mission. Not even throughout its 50-year career, has anything notable been found that needed changing within its basic systems. Differences exist between the “inch” and “metric” versions (see sidebar) but none of these differences represent a design flaw.

The FAL gas system is driven by a short-stroke, spring-loaded piston housed above the barrel, and the locking mechanism is a tilting breechblock, both similar to the Tokarev SVT. On lockup, it drops down into a matching shoulder in the receiver, as do the bolts of the SKS and MAS-49. The gas system has a rotary adjustment spindle on the gas block behind the front sight base, allowing adjustment for fouling, ammo or environmental conditions. A separate gas plug can be closed completely to fire grenades or to require manual loading. Magazine capacities range from five to 30 rounds; 20 being standard. In regular versions the recoil spring is in the stock, while in folding-stock versions it is housed in the receiver cover. Such “para” models require a modified receiver cover, recoil spring, and bolt carrier, and a modified lower receiver to accept the stock.

FAL rifles have been manufactured with both light and heavy barrels, with the heavy barrel intended for automatic fire as a light support weapon (its least successful role). Most heavy-barrel FALs are equipped with bipods. Some standard models were equipped with light bipods, such as the Austrian StG 58 and the German G1. A bipod has been available as an accessory.

Compared to contemporary 7.62×51 rifles, the FAL is comfortable to shoot, due to excellent ergonomics and the adjustable gas system that can bleed off excess gas. Like its contemporaries in this caliber, full-auto shoulder fire is hard to control, and even the squad-automatic versions were not as effective as heavier belt-feds.

Austria—The Österreichisches Bundesheer (Austrian Federal Army) adopted the FAL as the Sturmgewehr 58 (StG 58) and it was manufactured by Steyr-Daimler-Puch (now Steyr-Mannlicher), featuring synthetic stock, triangular metal handguard with bipods like the German G1, and a unique flash-suppressor/grenade launcher. Replaced by the AUG in 1977, but still in inventory.

British Commonwealth—The representative rifle among the Commonwealth would be the L1A1 SLR, called the C1 in Canada where it features a stripper-clip guide and modified rear sight. Canadians and Aussies co-developed the L2A1/C2A1 heavy-barrel support weapon similar to the FN 50.41/2, but with folding handguard/bipod and 30-round mag (UK, New Zealand rebarreled BRENs to 7.62x51mm). UK production was at Royal Small Arms Factory Enfield, Birmingham Small Arms, Royal Ordnance Factory and ROF Fazakerley, with spares by Parker Hale. Canada, first country to use the FAL, used Canadian Arsenals Limited. Australian L1A1/L2A1 rifles were produced at Small Arms Factory, Lithgow, who also exported to ASEAN countries.

Argentina— Argentine FALs were produced at government-owned FM (Fabricaciones Militares) at the Fábrica Militar de Armas Portátiles “Domingo Matheu” (FMAP “DM”) in Rosario. Upgrade programs have included conversion to 5.56 NATO. Sub-rosa stocks have been purchased for groups like the Contras, and Croatian separatists.

Mexico—Assembled under license at the National Arms Factory during the 1970s.

South Africa—Produced under license by ARMSCOR as the R1 (standard) plus an R1 HB, R1 Sniper, R1 short Para Carbine; R2 (lightweight) and R3 (semi-auto only). After the arms embargo of Rhodesia, Rhodesians imported R1 rifles.

India—Reverse engineered the UK L1A1, known as the 1A1, featuring Lee-Enfield style wood butt with trap; also as the selective-fire 1C.

Israel—Adopted as standard in 1955, was in production in Israel until 1981 as the Rov’ve Mittan or Romat, in both regular and HB; Problems with overall length and reliability in the dusty climate favored its replacement by the Kalashnikov-action Galil.

Nigeria—Licensed by DICON (Defence Industries Corporation, Nigeria) as the NR-1.

The FN FAL has truly been a rifle for all seasons. So universal was the FAL among Western nations, it was used by both sides in the Falklands War. So long-lived as a battle-worthy rifle is the FAL, its authoritative bark echoes through the streets of Damascus as this is written. 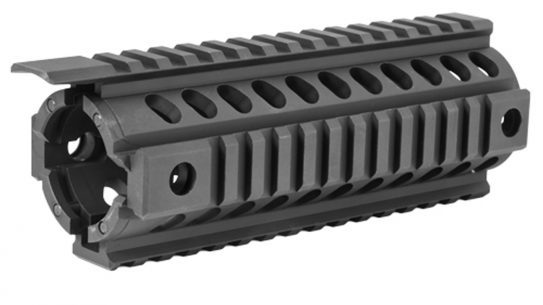