FNH USA, LLC is proud to introduce a new addition to the family of FNS pistols – the FNS-9 Competition model. In the final stages of development now, this new competition handgun was designed to fit the specific needs of competition shooters. Prototypes are currently being tested by some of the country’s best shooters at major matches this summer and production is projected to begin sometime in the January – April 2013 timeframe.

“The new FNS-9 Competition handgun will feature a five inch barrel and special sights that provide the shooter with a longer sight radius and a more precise sight picture,” said Ken Pfau, Senior Vice President for Commercial and Law Enforcement Sales at FNH USA. “This allows them to shoot faster with greater accuracy. The added barrel length also offers additional balance so there is less felt recoil and muzzle flip.”

Several members of TEAM FNH-USA are currently fielding prototype FNS-9 Competition handguns and will supply performance feedback to FNH USA’s product management team. “From testing at 3-gun matches to precision bulls-eye and action events like this year’s NRA Bianchi Cup, the FN FNS-9 Competition has proven itself to be reliable and effective in competition environments – a testament to the product,” said Pfau. ”The feedback we receive from the team is an integral part of our product development efforts and we are excited about the feedback already,” said Pfau. 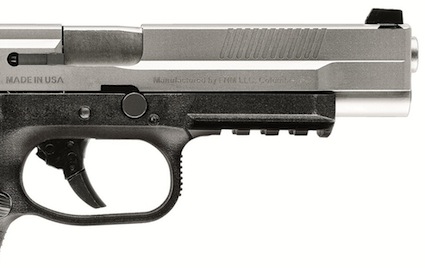 Other competition shooters are testing the prototypes, as well. OMB Guns World Champion Dave Sevigny recently used the FN FNS-9 Competition model to take first place in the World Class Steel Northeast Regional Championship. He took the title of High Overall Iron Sight Division, winning six of the seven stages of fire. “The new FNS-9 Competition model is light in weight, tracks well shot-to-shot and is easy to stop and transition between targets,” said Sevigny. “The trigger pull on the pistol I shot at this event was greater than five pounds, but it breaks clean and is consistent.”

For more information on the FNS line of handguns, visit FNHusa.com or the FNH USA Facebook Fan Page.