"Is it the latest space gun? No, but it is DMR perfection—at least according to me."

The differences among precision rifle models have for years been the source of arguments. Most are academic and nothing more than recommendations from this week’s “expert.” We all develop standards based on our experiences. For me, I care about what works—not what is most popular or prevalent.

My preferences have been developed primarily through my 10-plus years of training and deploying as a SWAT team precision marksman. My experience competing in, officiating and even running sniper tournaments also plays a part, though a very small one. When I was on the job, a number of rifles ranging from stock models to high-priced imports passed through my hands, and most saw time in the real world. Being a department armorer has also informed my perspective; I’ve seen many weapons that looked cool but would simply not work or would break under hard use. All of this established my “simple is better” mentality.

As a writer, I’ve tested numerous guns. Many are very expensive; some are simple and affordable. While evaluating these weapons is enjoyable, problems arise. Using my guns and scopes for testing meant that I had a different rifle or setup at each month’s training. On occasion, my precision rifle and scope would be out to a photographer, leaving me with neither. My primary responsibility is training, so it wasn’t an issue of deployment—it was just plain irritating. It was time to fix that and put together my perfect deployment precision rifle, one that would remain unaltered from this point forward.

Ernie Bray at Red Creek Tactical was kind enough to facilitate this process for me, as my schedule makes this sort of thing difficult. He is a trusted friend and experienced gunsmith, so I was confident about the build. My FN SPR A5M served as the base rifle. Its action is robust, and ejection and extraction are very positive. A slow and smooth operation of the bolt lands brass in a neat pile. Run the bolt hard, and brass is sent over your observer’s head. I’ve been through four of these rifles—and fired about 1,000 rounds in this SPR—and a case has never been left in the action. The SPR single-feeds on an empty magazine and has a safety that is practical, rugged and truly safe.

Many custom builders these days swear by single-feed designs, making the AICS the most prolific setup for Remington actions. FN started using this setup early on, and over the years it has proven to be rock solid for me. The latest version uses bottom metal with an ambidextrous magazine release on the side—no paddle. The gun is solid, reliable and very intuitive for ammunition changes utilizing both five- and 10-round magazines. The SPR A5M features a McMillan A5 stock with an adjustable cheekpiece and flush cups for sling attachments. Finally, the rifle has a steel, 20-MOA scope base.

If the FN has a weak point, it’s the trigger. While FN triggers are better now, for me they remain a bit harsh and stiff from the factory. Thankfully, that is easily fixed with the addition of a Timney trigger. Set at 3 pounds, it is crisp, predictable and reliable. You can go lighter, too, if you prefer.

Next comes the barrel. At 24 inches, the SPR’s barrel was too long, so another change was in order. The gun also needed a suppressor, one that would stay put. Having used precision rifles with barrels as short as 12.5 inches and as long as 26 inches, the barrel’s sweet spot with the suppressor is around 19.5 inches. Ernie Bray was nice enough to donate a Bartlein 5R barrel with a 1-in-11.5-inch twist rate and an M40 contour. With a Jet suppressor attached, the rifle fits perfectly in my Eagle Hybrid Sniper Rifle Case. It also slips nicely into my TAB Gear Rifle Cover. Both have seen extensive time on the ground and remain my favorites for deployment.

I sent the action to Long Rifles, Inc. (LRI) in Sturgis, South Dakota. After some serious research, Bray felt that was the best place to send the Winchester-style FN action. Chad Dixon at LRI has worked with this style of action for a long time, and the company’s process provides for some incredible precision. The action was blueprinted and trued by LRI’s CNC mill, and the threads were thread-milled, making them perfectly round, concentric and parallel to the centerline of the receiver bore. The tolerances are simply astounding—about as close to perfect as you can get. The bolt was then lapped and precisely centered.

The barrel tenon was turned, threaded and chambered using state-of-the-art CNC machining. This provided a perfectly concentric bore in relation to the chamber and receiver, making for the best possible accuracy. The muzzle was cut and given 5/8×24 threading to fit my suppressor.

The entire process was fast; it took less than a week. Ernie Bray was kind enough to help in that regard, too, and I soon had a barreled action that was as close to perfection as these things get. When it came back, we sent it over to Xtreme Long Range Precision for one of its signature tactical bolt knobs. 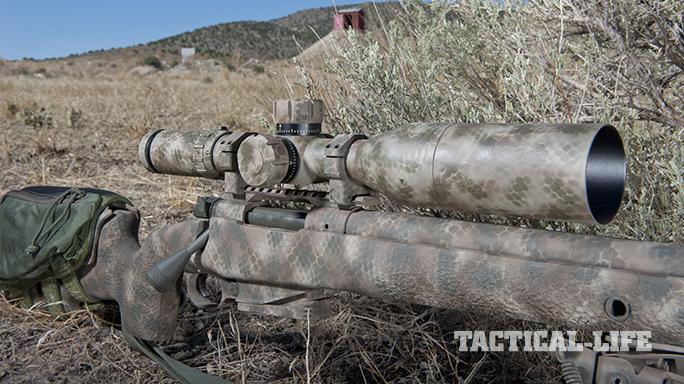 After the gun returned, it was time to put everything together. I mounted a Harris bipod and a Bushnell 3.5-21x50mm Elite Tactical HDMR scope. This is one of my favorite scopes because it is simple, rugged, reliable and repeatable. The knobs are large and easy to use with markings that can I can read without wearing glasses. The Bushnell has very clear glass as well as a Horus TreMor2 reticle. With a power range from 3.5 to 21X, the scope will meet any operational need. Mated to a set of Badger Ordnance tactical rings, the scope wouldn’t budge at all.

Next I added my Mike’s Gun Sales & Service Jet suppressor, which has seen years of service. It’s a simple, titanium, thread-on design that stays in place, and its light weight means the change in impact is minimal. It also doesn’t have use complicated muzzle devices.

The last piece of the puzzle was the rifle’s finish. Cerakote is one of the premier coatings on the market, and Red Creek is a master of applying it. Bray’s camouflage jobs are just unreal—the attention to detail is pretty amazing. While artful, the finish is also practical. My request was simple: Make it match my MultiCam bag and rifle cover. Although not a MultiCam pattern, it blends in masterfully. It is a mix of Cerakote’s latest Gen II “visual and near-infrared signature management” coatings, with H-series and high-temperature (C-series) coatings applied as necessary. The rifle was stripped and carefully reassembled with great detail. The final product attested to the effort that went into this build.

Prior to testing it, I added a few more things to the gun. First, I placed a cheekpad over the adjustable cheekpiece. (I’m not fond of moving parts on a deployment rifle, so the cheekpiece is properly spaced for eye relief, and the pad locks it in place.) Then, I installed a Blue Force Gear sling along with some super-strong sling swivels. 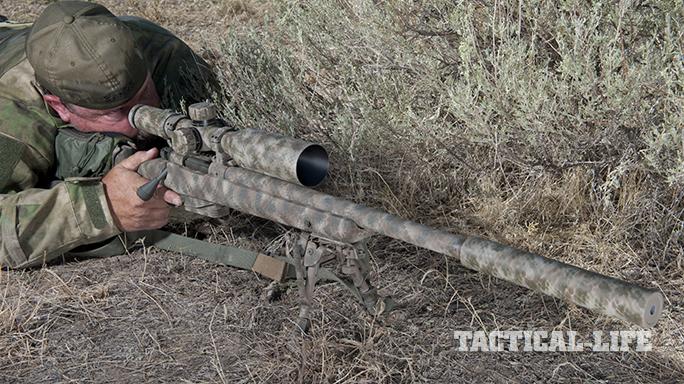 As nice as this rifle looks, it shoots even better. The action is as smooth as glass when you run the bolt. With state-of-the-art machining and a detailed coating, the lift is easy, the bolt is smooth and the gun functions flawlessly. The bolt knob is perfectly placed for easy manipulation—I never have to come off the gun. The bolt can be lifted and pulled to the rear with three fingers and dropped right back into place. The trigger is crisp and very predictable, measuring exactly 3 pounds.

This gun is also accurate as a rifle like this can get, at least in my hands. The best group, measuring a mere 0.26 inches, was accomplished with Hornady’s 155-grain TAP ammo. Nothing grouped larger than a half-inch, with Desert Tech’s ammunition coming in a very close second. This custom build is my fourth rifle with a Bartlein barrel, and each of those guns has been excellent. The twist rate and rifling made the rifle consistent, shooting everything from Hornady 155-grain A-MAX to Black Hills 180-grain AccuBond ammo under a half-inch. Our issued barrierround is the Black Hills 180-grain AccuBond, and this rifle put it within a half-inch of the Hornady’s point of impact. A single 10-shot group with both rounds mixed together resulted in a 0.65-inch group. It just does not get any better in a deployment precision rifle.

The rifle’s overall length is very versatile. Given the titanium suppressor, the rifle balances well off-hand and carries either slung or in my drag bag without being barrel heavy. Although it’s no lightweight, it is not overly heavy, either. The coated five-round magazine does not drop free, but that will change with use. The plain 10-round magazines drop right out with the push of a button. The weapon single-feeds easily with no change in accuracy. It really does everything you can ask of a police precision rifle, and it does it well.

This custom precision rifle is perfect for me. It was built to my specifications, so that was no surprise, but it exceeded my expectations. This gun represents simplicity, ruggedness, repeatability and practicality. It was truly a combined effort by many hardworking craftsmen who take great care and pride in their work. In every case, it is an example of the degree of precision and workmanship the American small-business person can produce. Is it the latest space gun? No, but it is DMR perfection—at least according to me.

This article was originally published in “Guns & Weapons for Law Enforcement” February/March 2017. To order a copy, visit outdoorgroupstore.com