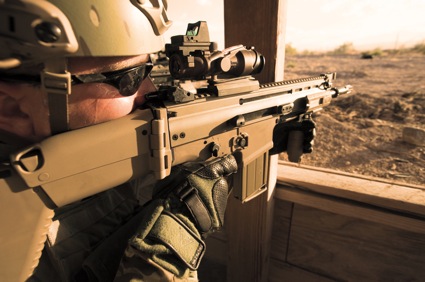 Following a worldwide solicitation to the military firearms industry, nine vendors submitted a dozen different designs for a new modular, multi-caliber weapons system. The FN SCAR submission was the only weapons system to pass all of the Go/No-Go criteria and was unanimously chosen in November 2004 by the selection board composed of senior operators from every SOF component. The SCAR is the first new assault rifle procured by the U.S. Military through a full and open competition since the M16 trials were held in the mid-1960s.

Tests in reliability, accuracy, safety and ergonomics were administered from August 2005 to September 2008 and were conducted in a variety of environments including urban, maritime, jungle and winter/mountain operational test scenarios. The SCAR weapons system successfully endured more than two million rounds of ammunition during these trials, therein making it one of the most heavily tested weapons in the history of small arms.

“The SCAR is one of the most tested small arms in our military’s history and is currently being employed in the fight to defend freedom,” said United States Senator Lindsey Graham (R-SC), member of the Senate Armed Services Committee. “Products of excellence, like the SCAR, represent the continuation of a long and proud tradition of defense manufacturing in South Carolina. I look forward to the continued use of this weapons system.”

The MK 13 MOD 0 40mm Enhanced Grenade Launcher Module (EGLM) quickly mounts under the barrel of either SCAR platform, providing additional capability to the individual warfighter’s firepower, and can be easily configured for use as a stand-alone weapon as well. Because of the SCAR system’s modular design, ergonomic commonality (100%) and parts commonality (greater than 80%), it represents a significant reduction in training costs and life-cycle support. The weapon system’s open architecture is designed to support future advancements in operational requirements including ammunition, aiming devices, sighting systems and other mission critical equipment.

“The SCAR weapons system is a major USSOCOM program whose success is a direct result of the effort, commitment and teamwork provided by FN and the U.S. Government. We are extremely pleased to have had the opportunity to work with such a strong team in achieving the Milestone C decision,” said Mark Cherpes, Vice President of Military Operations for FNH USA. “This milestone signifies that our products are operationally effective and suitable for mass fielding. We believe that the SCAR is the most flexible, reliable and cost-effective small arms weapons system ever offered to America’s servicemen and women, and that it will give them a significant operational advantage in both present and future conflicts.”