3
SHARES
14
VIEWS
Share on FacebookShare on Twitter
The FNP-45 Tactical pistol in .45 ACP offers shooters a combat-ready duty pistol ideal for special applications. It is shown fitted out with a Trijicon RMR electronic sight and a SureFire X300 WeaponLight.

When you’re in the field, simple is what you want in a sidearm. Sometimes you just have to react and pull the trigger — it’s that simple. For the better part of the 20th century, “simple” in terms of military sidearms was defined by the numerals 1-9-1-1. Over the last 100 years two schools of thought have emerged, actually two differences of opinion, one that favors the Colt Model 1911/1911A1 and its derivatives as an ideal large caliber sidearm, and one that doesn’t.

FNH USA’s FNP-45 Tactical is the perfect .45 ACP pistol for those who subscribe to the belief that a single-action semi-auto carried cocked and locked is not ideal. The line of demarcation is simply a choice. In 1985, our government made that choice and switched from the venerable Colt Model 1911A1 to the DA/SA Beretta M9 9mm. The .45 ACP was no longer the caliber of choice for a military sidearm. The choice that Fabrique Nationale brings to the table with the FNP-45 Tactical is that most favorite of options: a .45 ACP, DA/SA semi-automatic that can be safely decocked and carried with a chambered round. There are many handguns that offer this feature — some nearly as old as the Model 1911. Few, however, do it quite as well as the new FNP-45 Tactical. 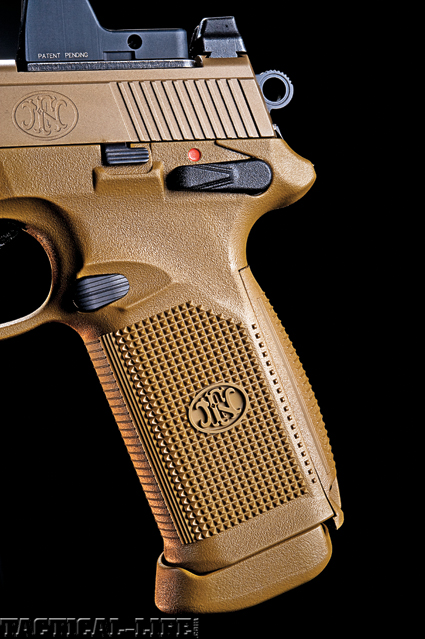 The wide staggered mag, elongated grips and rounded mag baseplate provide a rambling 3.5″ by 1.25″ of surface area for a secure hold, even with gloved hands.

The first thing you notice about the FNP-45 Tactical is its color. The frame is finished in what FNH USA describes as Flat Dark Earth, contrasted by a slightly lighter hued-coating on the stainless steel slide. It makes a striking first impression. The fundamental design of the new FNP-45 Tactical is based on principles established by John Browning and manufactured by Fabrique Nationale (FN) in Belgium since the turn of the last century. It is a recoil-operated semi-auto with a linkless barrel system—linkless referring to the absence of the pivoting link under the barrel, as used on the Model 1911 (which was designed by John Browning in 1909-1910).